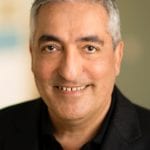 Elliot Younessian was named the new chief executive officer of Kärcher North America Inc. in Denver. He succeeds Markus Asch, who had conducted the affairs of Kärcher North America on an interim basis since January in addition to his duties as deputy chairman of the board of management and chief technology officer of Alfred Kärcher SE & Co. KG in Germany. North America is one of the most important and largest markets in the global group of companies of the world market leader for cleaning technology.

Younessian started his professional career at Samsonite before moving in 2000 to Castle Rock Industries, which later became part of Kärcher North America.