Architectural Workshop Celebrates Space from Within 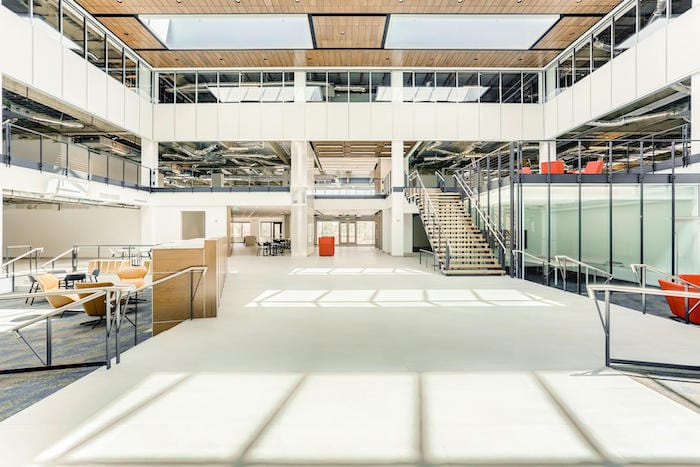 Exploring the ins and outs of space is an AW strong suit. At East Village, a dated office building was elegantly reconceived as a 21st century “workmosphere” focused on collaboration and internal connectivity.

Twenty years after he founded Architectural Workshop, Mark Bowers is still fascinated by architecture’s many interesting in-betweens. Recognizing both an ambition and aptitude, his father took him to Chicago as a teen in pursuit of inspiration, telling his son – “You’d make a good architect, take a look around and see what it’s all about.” In college, Bowers earned his structural and illumination engineering degree from the University of Colorado Boulder before obtaining a master’s degree in architecture from the Illinois Institute of Technology. An inside-out perspective of design has influenced his vision ever since. 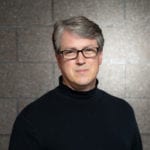 “For me, architecture starts with the basics, the bones of the building, how things stand up, and how structure, systems, materiality and lighting combine to create spaces and connections,” says Bowers from his office on the southern fringe of Denver’s Santa Fe Art District. After maturating through a series of firms both in Chicago and Denver, Bowers launched Architectural Workshop in 2000 from a genuine desire to develop a deeper relationship with clients. “We strive to compel a personal alignment of architecture to client needs by imaging solutions that go beyond constraints and opportunities to reach the highest level of design we can achieve.”

In a juxtaposition of possibly, the firm’s portfolio is somehow both broadly diverse and acutely focused, stretching across architecture’s only genuine dividing line. 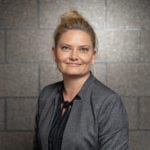 “Most architecture practices seem to concentrate on either single-family homes or commercial design, without much variation,” says Kati Jenista, who has become Bowers’ partner in design over the 16 years since she joined the practice. “At AW, we like to design on both sides of the divide because there are a lot of positives in custom homes that can benefit the commercial perspective. Likewise, there are many influences from commercial architecture that enhance the way we design homes to be smarter and more sustainable.”

Whereas residential architecture necessitates a refined articulation of the owners’ emotional perspective through style, materiality and a healthy connection to the environment, commercial architecture often is influenced by technology, sustainability and efficiency in ways that can be incorporated to make custom homes to live richer. This cross-trainer approach to design is embodied by the firm’s tag line – enriching lives through design – and manifests itself across a vibrant tableau of successful projects that quietly speak for themselves.

AW has had its hands on the Tivoli Student Center and Starz Theater on the Auraria Higher Education Campus for several years, working on a series of interior revitalization efforts that illuminate an ability to find the sweet spots between spaces.

“We have been engaged in about nine different adaptive reuse projects at the Tivoli,” says Jenista of AW’s ongoing relationship with one of Denver’s oldest and most iconic public buildings. Built in 1870, the Tivoli has lived many lives and today stands as the epicenter of student activity on the multi-institutional campus in the heart of Denver. In 2014, AW was engaged to rethink four seemingly forgotten basement theaters as innovative and inspirational spaces uniting the formerly scattered programs of the University of Colorado Denver’s College of Arts and Media. AW was also able to transform another old theater space into the Comcast Media & Technology Center. Now a hub of collaboration, AW’s elegantly modern rethink transformed this double-height space as a research and media lab for the College of Arts and Media, the College of Engineering and Applied Sciences and Computer Science Engineering. The upper level of the Tivoli Starz Theater recently has been repositioned as UCD’s LynxConnect, a one-stop-shop for student advisory services in experiential learning, international studies, career services and study-abroad programs, among others.

“Human interaction is fascinating and greatly influences our work,” says Bowers. “The ways people live, learn, work and play don’t just happen in a home, classroom or office, but indeed, often take place in the spaces in between.” 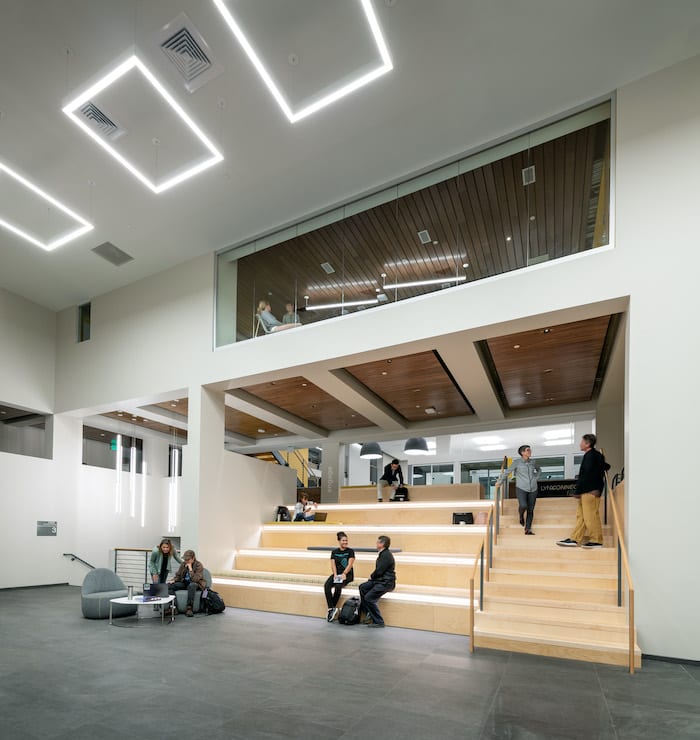 LynxConnect is a one-stop-shop for student advisory services in experiential learning, international studies, career services and study-abroad programs, among others.

In searching for the heart and soul of a space, Bowers is committed to fostering a team-think environment to uncover a project’s hidden potential. AW’s creative ethos stems from a workshop approach to conceptual discovery whereby owners, engineers, contractors and architects all work as a unified team to dissect each design’s constraints and opportunities. In the workshop format, everything from space planning and programming, to materiality, sustainability, cost, schedule, quality and safety are holistically evaluated – literally put on the table. AW’s office environment is open plan with plenty of room to spread out adorned by areas for model making, material and product consideration, and quiet contemplation.

Applying the workshop approach is not restricted to higher education or small-scale adaptive reuse. At East Village, AW’s creative reimagination of established space was applied to approximately 140,000 square feet of commercially leased office property. Built in 1982, this Greenwood Village office building was developed around a central atrium space that originally intended to bring the outside in, complete with a pond, trees and vegetation. By the time AW was invited to reconsider the space with architect Alan Colussy, the atrium was stagnant, dark, dated and overgrown. The building owner intended to simply reposition the lackluster central volume as more leasable offices, eliminating the unappealing space while adding usable square footage.

“We felt the atrium still provided an opportunity, a chance to create a centralized, cohesive sense of functionality and community,” shares Jenista of the building’s transformation from early ’80s, ex-urban office relic to reinvigorated 21st century “workmosphere.” The redevelopment incorporated new, larger skylights and worked within building codes to open the three floors of offices up to the atrium. A central stair of wood, a grab-n-go coffee bar, gaming area, and rings of casual seating areas all combine to reanimate the building. “In effect, we reimagined a low-benefit, interior wetlands that was a bit swampy, as high-functionality community gathering space that looks like a jewel box.”

Along with creativity, innovation and uniqueness, sustainability is one of four firm fundamentals that influence the AW point of view on every project they touch. Beyond the basics, AW has developed several net-zero energy and net-positive energy single-family residential projects and is in the process of scaling those lessons learned up to an 18-unit program for Habitat for Humanity of Teller County. 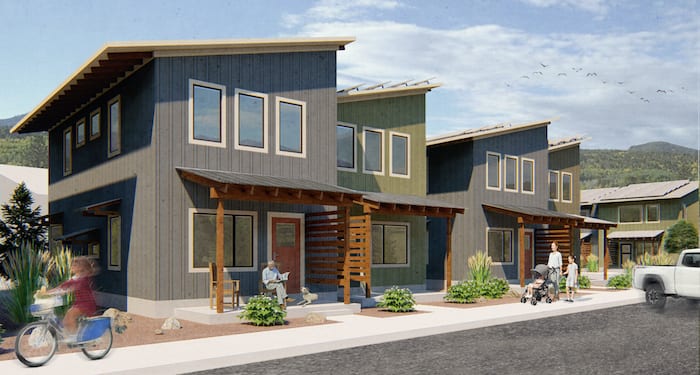 AW has developed several net-zero energy and net-positive energy single-family residential projects and is in the process of scaling those lessons learned up to an 18-unit program for Habitat for Humanity of Teller County.

“We are working on a collection of nine new duplex townhomes that will be built in Woodland Park, which incorporates new thinking in net-zero-ready, attainable-housing,” says Jenista of the in-progress scope of work. Composed as vertically stacked townhomes, each of the nine duplexes will orient around an internal community common. A high altitude, air-source heat pump will heat and cool the homes through a radiant floor system. LED lights, Energy Star appliances, an integrated smart house system, and insulated concrete forming blocks all combine to bring the practical application of sustainability in daily life down to the homeowner level. Residents will have the option of purchasing roof-mounted photovoltaic panels that, once installed, will make their home a net-zero property.

“Architectural Workshop doesn’t look at design as a competition between firms,” summarizes Bowers of the practice he has built. “Our projects all benefit greatly from a collaborative experience with owners, engineers, contractors, design partners and typically the end-users themselves. We believe that as a community, we can raise the level of design to make the world a better place and have fun while we do it.”

Published in the December 2020 issue of Building Dialogue.