Building a Mountain of Books in Sun Valley 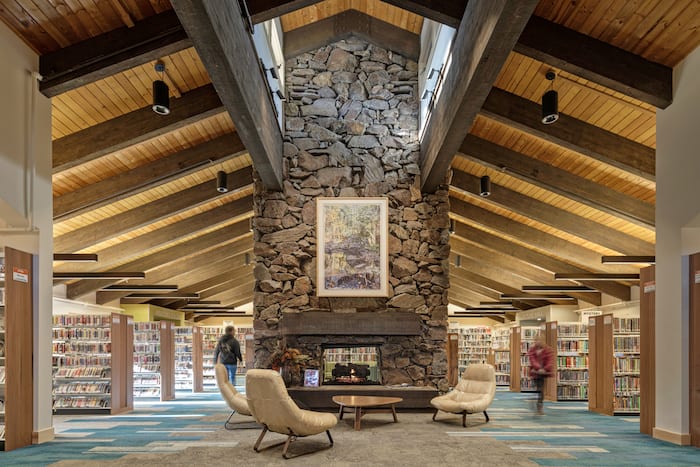 In 1955, 17 visionary women from the Sun Valley, Idaho, area founded The Community Library as a privately funded, privately governed, nonprofit library. By the intention of the founders, the library receives no tax funding, which makes it unique in the field of public libraries. Over the past 40 years, the 27,000-square-foot mountain lodge-like structure originally constructed in 1976 had become swollen with a collection of nearly 160,000 items, reinforcing the community’s belief that people who touch books are in a dialogue with them. 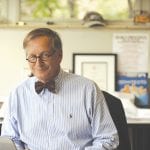 The library’s transformation commenced in 2015 directed by a team from RATIO. It was spurred first by an eroding infrastructure, and then by the need to reconstruct the library in the context of new assets, expanding programs and resources, and an invigorated focus on the need for a dynamic educational and cultural campus in central Idaho, 150 miles from the nearest university. A primary challenge of the project was to bring coherence to a structure that had been expanded like patchwork, resulting in disjointed, inefficient systems, jumbled wayfinding, and an anachronistic invisibility in Ketchum’s downtown core.

The challenge of balancing history and innovation, honoring the library’s heritage and local history while also encouraging new ways of learning and civic engagement, and incorporating new technologies and spaces that span physical and virtual experiences, were critical to advancing the renovation process. In addition, addressing the challenge of creating greater flexibility with a commitment to accessibility, diversity and inclusion, and in anticipation of future collection and programming needs across multiple media formats, without erasing the essence of the building’s original architecture were critical design considerations. 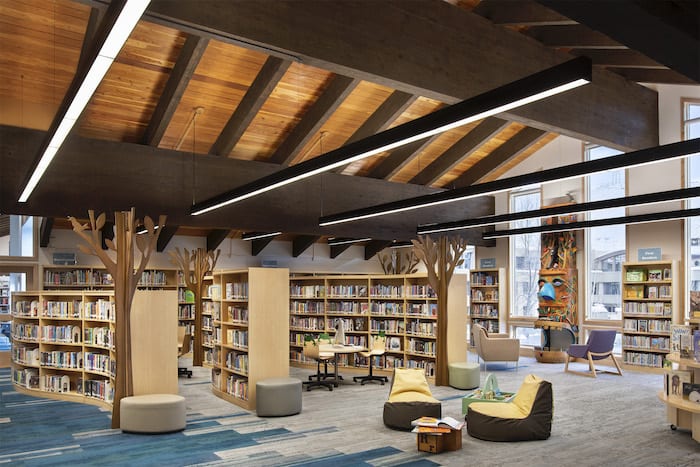 According to Executive Director Jenny Emery-Davidson, “The transformed library asserts both roots and reach: The design conveys a strong sense of place in central Idaho and a spirit of innovation.” Historic elements that defined the library to the community for years were once again celebrated: the stone fireplace, the massive glulam timbers and rich wood finishes, and the vast collection. “The renewed design elements convey a dynamic energy for the future,” Emery-Davidson added.

To create coherence, walls were selectively removed, improving navigation and leveraging spaciousness as a unifying force. A new central spine generated a “main street of knowledge.” Color and furniture palettes were selected to foster intuitive wayfinding and unify the building while allowing each space to reflect the personality of its primary functions.

Key design motifs integrate the library’s interior and outdoor spaces as well as integrate the past with the present and future. Strategically applied diagonal wood members coupled with the library’s newly crafted “mountain of books” were used as a reference to Idaho’s mountain landscape while simultaneously applying a modern touch to the building’s architecture. Additionally, redwood reclaimed from a nearby historic water tank were milled as end panels of the stacks as a textural gesture that ties to the community’s local history.

The newly (re)imagined Community Library celebrates a new relationship with its surrounding environment and trailblazing identity while inspiring a continued curiosity of the library’s rich collection. The $10 million renovation was recently acclaimed by the American Library Association and IIDA in the 2020 Library Interior Design Awards program, which honors excellence in library interior design and further promotes examples of extraordinary design reflected through innovative concepts.