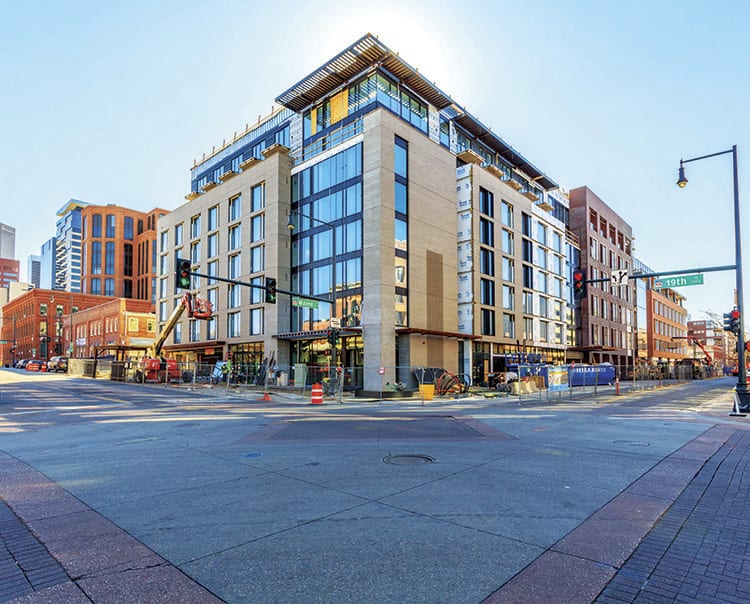 The corner of 19th and Wazee will feature the entrance to Kachina Southwestern Grill, another delectable restaurant concept by Sage Restaurant.

It’s said there are two sides to every story and some have several more than that. Though already many years in the making, the story of Dairy Block has yet to be written and will likely continue to evolve in generations to come. Certainly Denver has seen a few whole-block redevelopments during the last decade, but the developers of Dairy Block believe they are delivering more than merely a new development.

“It’s essential to everyone involved that Dairy Block become a new experience for Denver, a heart-and-soul kind of place,” says Mark Witkiewicz, of McWhinney, one of three investment partners responsible for the new mixed-use property nearing completion in Denver’s Lower Downtown neighborhood. Joined by Sage Hospitality and Grand American, which has owned the property since the early 1980s, the Dairy Block development team was supported by a strong collection of architects, builders, engineers, artists and creative professionals in many other areas brought together to help craft an uncommon vision.

The facade of the new building and historical building demonstrate one foot in the past and one in the present.

“The history of the Windsor Farm Dairy and this block is a place where things were made by hand, with care, craftsmanship and pride. Our goal is to celebrate the spirit of the ‘maker’ by creating a unique, urban encounter for the city,” continues Witkiewicz. The Dairy Block will be an eclectic mixed-use property that blends new construction and historic renovation while offering hotel, office, retail and parking components with a certain little magic added in.

The heart of most developments is the building program and the developers’ obvious objective of profit through calculated risk. Dairy Block’s program began with the desire to preserve and reuse the original Windsor Farm Dairy building, which has stood on the corner of 19th and Blake Street since 1918. The two-story red-brick structure maintained a legacy in dairy product production until 1973, when second owner Meadow Gold relocated its operations out of the growing downtown core. The Dairy building is joined along Blake between 18th and 19th streets by a collection of similar era red-brick structures in varying heights filled with random tenants that largely amounted to an easily passed-by hodge-podge of whatever. The western edge of the same block along Wazee consisted of two ill-maintained surface parking lots and a low-slung bunker of a building in dirty grey brick and glass block taking up valuable downtown space. The result amounted to a lack of genuine presence compared to the last 20 years of area redevelopment in much of surrounding LoDo.

“The development parcel had been something of a desert amid so much other great activity in the area,” says Jesse Adkins of Shears Adkins Rockmore Architects, whose firm was actually a tenant in one of the Blake Street buildings for some 12 years until it relocated in 2014, making way for the new construction. Like the development partnership, the Dairy Block design team is also multifaceted. SA+R took responsibility for the new six-story office building on the southwest corner of the development, which sits on top of three levels of below-grade parking that will accommodate up to 392 vehicles. SA+R was joined by Denver architecture practice, Johnson Nathan Strohe, which specializes in high-end and boutique hospitality projects. JNS led the design efforts for The Maven, a 172-key, one-off hotel that will join the historic Oxford and the award-winning Crawford at Denver Union Station as one of Sage Hospitality’s local legacy of managed assets.

Ironically, though the hotel and office buildings will be seamlessly connected inside, they are actually designed and constructed as two completely independent buildings. The office building uses a structural steel frame and the hotel is post-tension concrete. Both buildings will have independent systems, utility connections and billings; even project accounting for construction is completely separated. Superintendent Bill Bialek of office and hotel general contractor Saunders Construction, remarked that other than the expansion joint connecting them, the two buildings could have been built five blocks apart.

The Maven’s lobby features a large and unique skylight to show the wonderful colors of Denver’s skyline – day and night.

Hyder Construction is at the helm for the preservation of the Windsor Dairy building and other brick structures along Blake Street. These properties will combine to become new retail (41,946 square feet) and office spaces (44,453 square feet) targeting a curated collection of American heritage brands, Colorado originals, international retailers and inspired dinning. The key to tenant selection will be the maker theme and whether vendors produce custom timepieces or craft breads, beers or beans, the product must be a passion rather than a profession to fit the vibe.

While every development begins with a program, the former block’s lack of presence among such an intensely redeveloped urban core insisted this development offer something quite a bit more to stand out. It’s in finding a soul that a project becomes more than bricks and sticks, dollars and cents and many developers would agree that tapping into a place’s soul is key to long-term success.

“We were driven by this idea of giving a gift to the city, because Denver has been so good to all of us,” says Peter Karpinski, of Sage Hospitality. That gift admittedly took a moment to find – the block had been under consideration for redevelopment for longer than anyone could actually say. “We want to plant the seed and grow something the community will authentically embrace. The Dairy Block will be a new kind of marketplace focused on the alley between the buildings – a found experience, again and again.”

Coursing between the structures of most of the area’s historic blocks, alleys generally have been backdoor operations where trash, cigarette butts, graffiti and filth collect on hard surfaces. At Dairy Block, the alley is celebrated, a living vein through the property allowing the design to take an inward look. Here the curated retail and dining options will mingle in a mix of creativity and energy, ever-changing art installations and the juxtaposition of historic preservation and new construction. Rooms at The Maven and terraces among office suites will peer over Bourbon Street balconies into a jamboree of pedestrians below shopping, dining, and lingering amid the artisans and their works.

The synthesis of the Dairy Block’s many different stories and personalities fell to Crème, a collaboration of dynamic creatives who solve design challenges through storytelling and experience building. Founder Jun Aizaki describes Crème as an integrated design firm composed of designers of many sorts – architects, interiors, industrial, graphic, branding, and the like – more makers.

“This was a wonderful opportunity to soak in the positive energy that’s floating around, and shape, mold and hone it into a precise lifestyle atmosphere” says Aizaki. Crème’s role on the Dairy Block began when Sage decided to fill The Maven’s dining area with Kachina Southwestern Grill, a Sage original restaurant concept the company has already successfully incubated in Westminster and is ready for a second location. Crème participated in the design of the first Kachina and as the Dairy Block design took shape Aizaki’s role grew.

“The Dairy Block is about people who create things – makers are mavens, doers who get it done and we share in our love for our work as one of life’s premium prizes,” finishes Aizaki. As the Dairy Block races toward completion, among the developers, designers and the doers building the work the excitement continues to build for Denver’s next great place and this gift to our great city. \\

Featured in the December 2016 issue of Building Dialogue