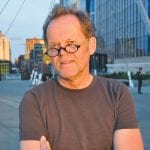 While good in concept, this idea has not worked very well. Just because a neighborhood is “stable” does not mean it should never change, and just because an area might “change” should not mean anything goes. Our new zoning code has not calmed the dialogue; instead, the discourse is more divided than ever.

Should higher densities be allowed? That should depend on the balanced judgment of people, including the neighbors, considering the many consequences of new development. But that does not mean that the immediate neighbors should hold veto power, nor does it mean that land use decisions should go to a public vote, a demand that is frequently made in cities that are even more divided than ours.

One of the biggest limits to considered debate is our newest tactical fad, fake news. Proponents and opponents both label and assert things that elevate the dialogue from semirational to mostly emotional. Once that line is crossed, those who have turned emotional rarely return to reason – no matter how false the claims may be, their feelings are very real. We can’t let alternative facts enter the decisions that affect our quality of life and the safety and livability of our neighborhoods. We are all in this together so we need to find better ways of working together to protect what we value.

As a native Chicagoan who grew up in the ’50s with highly divided racial and ethnic neighborhoods, I have always marveled at the diversity we find in Denver neighborhoods. If you study any neighborhood that you value in this city, you will see a crazy quilt of house sizes, architecture, building age and densities. You will find many quaint anomalies that add character – streets that don’t quite line up, an old corner store surrounded by houses, a little park, mansions sitting right next to bungalows, duplexes and old apartments amidst some of our highest value areas, and more.

Few Denver neighborhoods have the boring monotony of most suburban areas. It is this diversity of home sizes, unit types and architecture that makes us resistant to rapid swings in value or other instability. Our diversity means that homes sell and apartments rent in random, never-ending cycles. This keeps change from swinging too rapidly – until this condition (and theory) was overwhelmed by our most recent growth surge. Now, we see whole neighborhoods under pressure to accept bigger and bigger buildings. It is not hard to find David scowling at Goliath right across a local street.

I have always marveled at the diversity we find in Denver neighborhoods. If you study any neighborhood that you value in this city, you will see a crazy quilt of house sizes, architecture, building age and densities.

As an urban designer for 40 years I have been on both sides of the argument, sometimes advocating for change and sometimes for preservation. Where we have brownfields or deep blight, I still think change is right, but only if design is exceptional and respects the context. More and more, however, I fall on the side of slowing our growth because the pace of change is too great.

I once believed that growth was needed to keep housing prices down. I was wrong. We have seen the most rapid expansion of rental housing in history – which has come with the most rapid rental increases in history. Supply and demand are not as tightly related as expected. We are facing unprecedented in-migration, but we are also allowing it by claiming that we must build to fill a need. A neighborhood that was mostly bungalows and duplexes has not become more affordable or better because it now is fringed with five-story wrapped parking garages or new towers. I live in one of these locations, and I have yet to see any benefits other than rising property values. I don’t mind looking for parking. I don’t mind having more people around. I don’t even mind more traffic (I bike to work). What I do mind is that my neighborhood feels less cohesive, has fewer trees, fewer porches, fewer kids and less sunlight.

We should improve our debates by thinking about growth as something more complex than just big buildings and traffic. I like to think about it in at least these five categories:

Design. Most new projects won’t get high marks for design. The same buildings are happening in every neighborhood and every city. Designers are not fighting back enough on their clients. Why does so much growth look alike? Developers believe that designs that have been approved elsewhere can be approved here. Most of the time, this means taking a large building and fragmenting it with shapes and materials to make it look like it is made of smaller parts. The result isn’t good design, rather it is mannerism pandering to some general notion of public opinion. If a building is going to be large, give me one that is skillfully proportioned, fenestrated and articulated, and crafted with materials and details that make it whole.

Scale. Most new projects are out of scale with their context. This is usually a result of development economics and inappropriate zoning. When these two things come together, we get a developer who believes he has rights facing a community that is fighting for its rights. This is too late in the process. Both the community and the developer are victims. What we need is to reconsider the role of neighborhood planning. Let’s have them argue with each other before the developers come along, and let’s create neighborhood plans with both vision and teeth.

Congestion. This generally means traffic and parking, but in fact congestion takes many forms. This is an area where current thinking in urban planning is growing rapidly. It is now clear that conventional transportation planning is wrong. Congestion isn’t a failure to move cars; it is a failure to give mobility to people. Denver’s transportation staff includes some very enlightened minds. Now we just have to bring our communities and leadership along to realize that congestion isn’t bad – inaccessibility is. We need aggressive investments in multimodal access and mobility in transit, bikes and walking.

New People. I often hear complaints about growth spoken in terms that hide the fact that people just don’t want more or different people in their neighborhood. Denver has thrived for generations precisely because of its willingness to embrace and enable new people. Let’s not let that change. Let’s not build a wall.

Economic Consequences. Housing affordability is a major problem, but fast growth has not slowed that. This issue can only be addressed by public policies that improve access to affordable housing and transportation, that increase educational access and achievement or that otherwise grow and enable the capacity of families to keep pace and not fall victim to growth.

I hope that DenverRight is listening to what people are saying and seeking new ways of imagining our city. The new energy I feel in Denver is palpable, with young people investing in homes and businesses. We need to ask them why they are here, and why they are investing. Surely there are ways, with our progressive spirit and love for this city, that we can let them show us the way.

Featured in the June 2017 issue of Building Dialogue