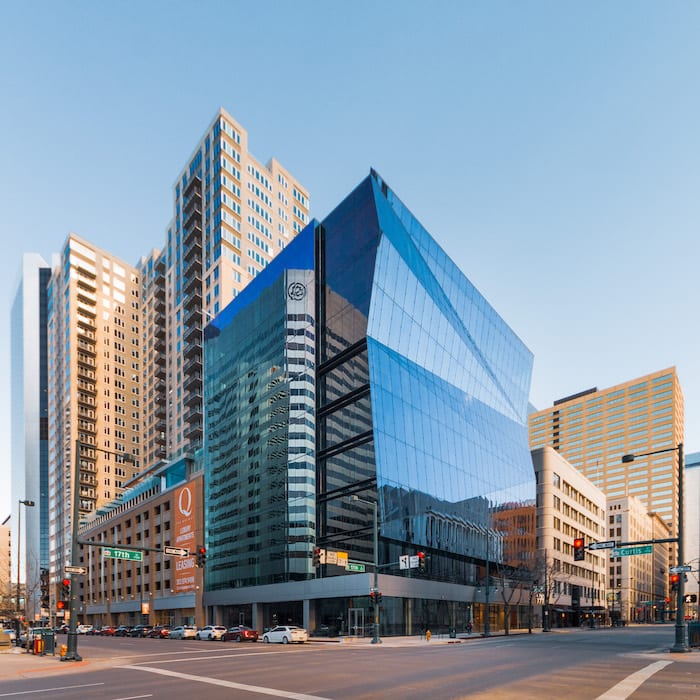 Prism’s iconic exterior is distinguished by six angled glass planes that shatter conventional thinking and define a sense of prestige.

“Design is a journey, best taken in the company of clients and peers,” says Daniel, who joined Davis Partnership in 2004. Now as a principal, Daniel has a hand in the design of many of the projects the firm touches. He expects that collaboration will always be the cornerstone of success in his work. He smirks at the idea of the infallible genius in a black cape and barrette. “I don’t think we benefit from believing we know the answer before we even start. I don’t think true architecture is created that way.” 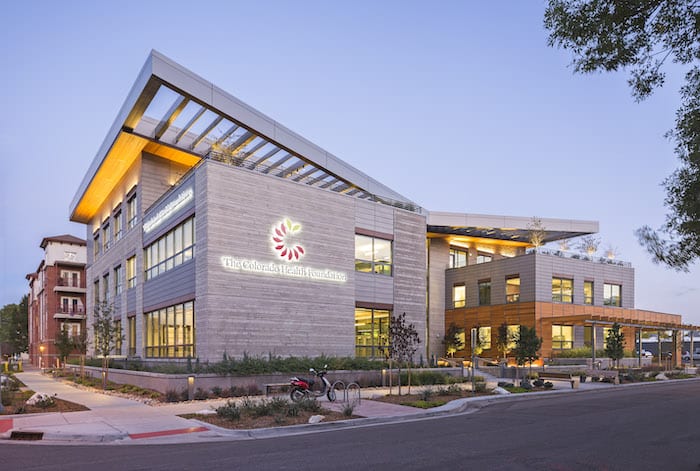 Daniel’s journey in design began in earnest after he was already on his way. He graduated from the University of Virginia with a bachelor’s degree in architecture in 1993 but admits that his attention was hardly fully focused on design during his undergrad years. It wasn’t until he and a couple of friends took a cross-country trip after college exploring many U.S. cities and towns that the spark was ignited. Escaping the confined experience of his roots in suburban Richmond, Virginia, Daniel was able to experience places like New York, Chicago, L.A., San Francisco, Austin, Santa Fe and San Diego, and began to see the power of design on a limitless scale.

“The spark for me in seeing all of these cities was that great architecture contributes to making great places. I wanted to be a part of that,” says Daniel. He selected the University of Colorado Denver School of Architecture in pursuit of his master’s degree in architecture and landed at Tryba Architects after graduation. There he learned the ropes, climbed the ranks and eventually became the firm’s design director over the course of a decade.

Since joining Davis Partnership, Daniel’s influence has grown across a wide spectrum of market segments from mixed use and urban infill to civic to health care. However, process and collaboration remain fundamental to any discussion on design he is willing to have on his own work.

At Davis Partnership, Daniel and his colleagues have an almost holistic suite of design disciplines at their direction. Architecture, landscape architecture, interiors, entitlements, lighting, signage and wayfinding all under one RiNo District roof. In-housing top-flight expertise in so many interconnected and critical facets of the design process has driven Davis Partnership’s headcount to around 180. The benefit is control.

The prairie-style influenced design of The Freyer-Newman Center for Science, Art, and Education posits the building as the backdrop for the landscape, giving the natural order the reverence it deserves.

“We like to help clients control everything users will touch, see or feel in the building,” says Daniel. Davis Partnership’s organizational structure allows an architect to connect with a lighting designer and an interior designer on a personal, lunch-buddy level. The results are hard to debate, Daniel, reports that the firm enjoys a repeat clientele on more than 90% of their work. A steady stream of industry and peer recognition greases the wheels.

“I believe that if we produce the best work, then the business will take care of itself,” says Daniel. “Better work means better clients, better projects and better staff.”

Commenting on the skyrocketing Denver real estate market, Daniel feels strongly that taking the best work is derived from meaningful dialogue with clients. A strong client vision is an asset in architecture and what Daniel hopes for in every commission. Good design must also respond thoughtfully to a combination of context and community in a way that makes the sum greater than the parts.

The Colorado Health Foundation Headquarters, a Davis Partnership project completed in 2016 lives its mission in every detail. An ideal intersection of Davis Partnership’s varied disciplines, the design for this nonprofit, community resource rejects the maximization of density in favor of a building scaled to the neighborhood. Smaller primary masses, the deliberate insertion of a courtyard entry plaza and the incorporation of board-formed concrete all combine to bring the building down to a human scale.

Inside, the building’s grand staircase is the center of attention and embodies the client’s design objective of health-positive architecture. Soaring through the building’s most high-profile space as a swirling, vertical circulation spine, the stairs compel physical activity and increase the likelihood of chance interactions and spontaneous discovery among building users. The clean curves of the stair are animated as the precise, elegant geometry for the form reveals itself in tones of shadow and light.

Beyond understanding the owner’s objectives, Daniel feels that it’s important to appreciate that effective architecture in the context of city-building requires structures of many magnitudes. Trying to make every building an icon is a mistake.

“In this heated market, there is a lot of commodity going on,” says Daniel. In the rush to claim and repurpose parcels for profit, density and speed-to-market seem to define objectives, especially Denver’s recent rash of pop-up multifamily developments. Daniel diplomatically suggests that for some developers, it’s a matter of temporary versus timeless, the latter taking far longer to accomplish. Davis Partnership, of course, strives to be on the side of enduring architecture. “Some of the most important architecture in Denver has been deliberately designed to become part of the urban fabric as a background building.”

Illustrating his point, a downtown parcel developed by Shea Properties at 17th and Curtis provided Davis Partnership with the unique opportunity to do both a background building and an iconic edifice in collusion on the same site. Combining a 28-story residential tower offering best-in-class amenities with a 94,000-square-foot office building that features a dramatic, glass enclosure along the 17th Street frontage, the two distinctly designed buildings are conjoined by a shared parking garage. 1776 Curtis, the residential high-rise, is dressed for downtown in soft hues and straight lines and easily fits in below the taller surrounding office buildings without making a scene. At just nine stories tall, The Prism, however, will be instantly recognizable for glass diagonal folds creating six angled planes whose points intentionally conspire with the adjacent Hotel Monaco to extend visual impact by embracing context.

“At Davis Partnership, together, we are driven to create places that inspire, elevating the joy and dignity of the human experience,” says Daniel when asked about ethos. Binding that sense of character into the work begins by bringing clients, consultants, contractors and participants into the process as much as possible. Designing something that is both indelible and enduring that is capable of elevating the human experience requires a grander contextual conspiracy. At the Denver Botanic Gardens, Davis Partnership is approximately halfway through construction on The Freyer-Newman Center for Science, Art and Education. This public-facing gem will entice visitors from the corner of 11th and York and operate as the only place in the Gardens that doesn’t require a ticket to enter. The two-story, Prairie-style design takes obvious influence from the Gardens’ iconic precedents but also confidently embraces the duality of being both a beacon and a background building on an architecturally-rich campus.