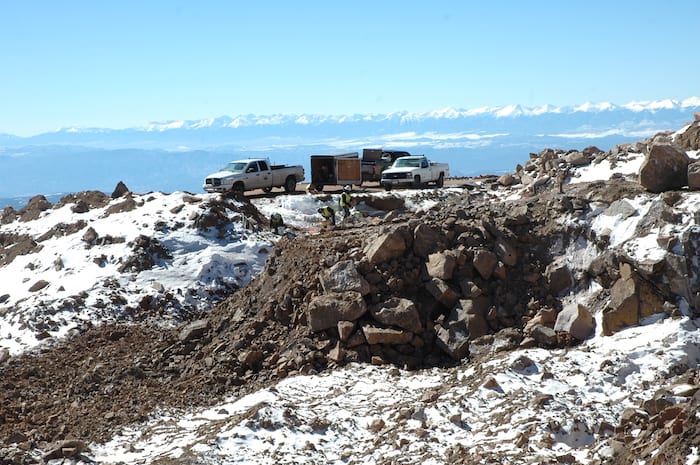 CTL|Thompson engineers conduct footing observations and testing at the summit.

Standing 14,115 feet above sea level, Pikes Peak is home to majestic views, a National Historic Landmark, more than a half a million visitors per year and, today, the highest ongoing construction site in North America. Crews are in the second year of construction of the new $56 million, 38,000-square-foot Pikes Peak Summit Complex, a three-building campus consisting of a visitor center with dining and rooftop terraces, observation decks and interactive displays, and a high-altitude research and communications center. 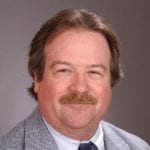 The new visitor center is the current focus, with GE Johnson Construction as general contractor. It will replace the current Summit House, built in the 1960s, which Colorado Springs Mayor John Suthers described as “a great place to get a doughnut, but other than that, it leaves a lot to be desired.”

This one will be much more than a doughnut shop. Clad in material similar to Pikes Peak granite, the majority of the center will be built into the southeast side of the summit to enhance the surrounding beauty and scenery. The design also plays a part in the building’s energy efficiency. The center will have LEED Silver certification and is being prepared to qualify for the Living Building Challenge, the first such building constructed in Colorado.

But it will take a few more years, a lot of work and a whole lot of engineering to get there. The reasons are many. The construction season is six months, at best, above 14,000 feet. By October, temperatures can plummet to zero, with wind chills falling even lower, and temperatures can drop to -40 degrees in winter. Snowstorms sweep in quickly, with wind gusts reaching 100 miles per hour. The altitude is tough on materials and people. And the location sits at the top of a mountainous road rife with hairpin turns too tight for large trucks to navigate. As a result, every move has to be calculated and recalculated.

Lead structural engineer Steve Horner, HCDA Engineering Inc., summarized it best: “Any time we thought we found an easy answer on this project, we were wrong.”

• Planning. Our team, comprised of CTL|Thompson engineers, RTA Architects and HCDA Engineering, started planning in 2015. Our task was to build a foundation and structure that could withstand the unforgiving conditions. We also had to mitigate the equally extreme ground conditions. The site is a combination of bedrock and alpine permafrost – soil and rock that remain at or below freezing temperatures all year to depths of up to 200 feet, only warming above freezing in direct sunlight or due to external sources. 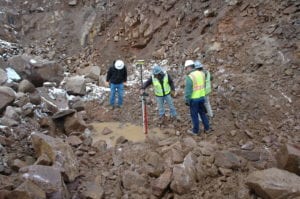 We focused on two primary problems. First, we had to overcome issues related to excavating and building in the permafrost layer. Second, we needed to design structural materials that could perform at 14,000 feet but be partially constructed at a lower altitude to minimize wear and tear on crews and equipment.

• Permafrost. When we started this project, we knew what NOT to do. The existing visitor center is a one-story facility built with a shallow foundation. Back when that prior building was constructed, the initial foundation recommendations were scrapped due to costs and difficulty in excavation during construction. As a result, the recommended 6-foot fill of crushed rock was reduced to half that amount. A layer of foam insulation was added to compensate for the reduced quantity and prevent freezing temperatures from reaching the foundation. It didn’t work. In the first nine months, the building settled 9 inches. The building, on top of the permafrost layer, created a zone of warmth that melted portions of the permafrost. Despite a fix at the time, problems persisted for the life of the building.

• Building materials. Building materials are also a significant issue at this altitude and in the permafrost. To account for all possible issues, we employed thermo-dynamicist Bob Pintner from Alaska-based R&M Consultants. Together, CTL’s materials experts and the Alaskan heat engineers devised building materials that could withstand both the cold and altitude and be built in a facility in Colorado Springs, yet maintain integrity at the high altitude. 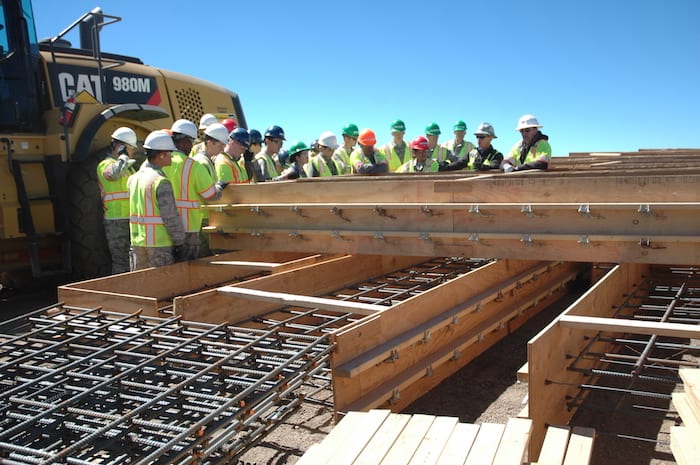 It’s not just equipment that has a much lower productivity output on the peak. Workers are required to pass extensive physical examinations to ensure they can handle the lower oxygen content, and shifts are kept short to prevent negative health effects. To help accommodate, we designed a building shell that can be premanufactured at a lower altitude in prefabrication shops in Colorado Springs.

There are costs, though. To transport the shell to the construction site, the size of each transport load has to be very carefully calculated, as materials need to be delivered and/or hoisted up the steep, winding, limited-weight-bearing-capacity road. It can take hours to haul heavy loads just a few miles. Recently we had to drive a steel track hoe up and down the mountain – at speeds barely reaching 3 mph. It took six hours to get down the mountain, in the middle of the night to avoid any car traffic.

Construction first began in June 2018 and resumed again this May. The next phase of the project involves pouring the foundations for the visitor center and the adjoining U.S. Army Corps of Engineers High Altitude Research Laboratory. The team hopes to install the lower portions of the foundation walls this season, along with part of the main structure for the complex. The team will also conduct site improvements in phases, since the existing Summit House will remain in operation until the new complex is completed.

We are hopeful that Mother Nature cooperates, confident in our planning, but only sure of one thing: We won’t get any easy answers.