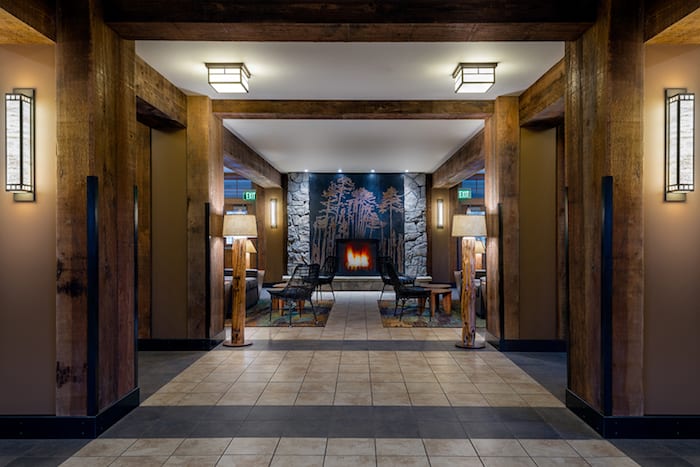 Visitors to Yellowstone National Park’s Canyon Village, the largest accommodation complex in the park, were pleasantly surprised last summer with brand-new accommodations. The stately, welcoming new lodges were the result of a two-phase, three-year transformation of the 410 obsolete cabin-style units, originally constructed in 1957, into five modern, multistory stone and wood structures (with an equal number of units) built in the grand lodge tradition of the National Park Service. 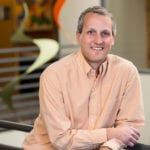 Our firm was selected by the architect, Denver-based Barker Rinker Seacat, to oversee the historically consistent design of all interior and exterior lighting fixtures, and to create a lighting plan that would comply with the U.S. Green Building Council’s LEED recommendations. 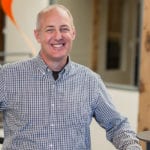 What makes this story most interesting, however, is the number of unique challenges the team had to overcome on this project. Not only is Canyon Village located on a very remote site in the heart of the Yellowstone with a highly condensed construction season (the site experiences 10 to 15 feet of snow during the winter), but also the buildings had to be designed to be “winterized,” as they are completely shut down during the coldest “hard-freeze” months of the year. Also, the architect chose modular construction for all five lodges (put together like Tetris blocks, driven in by semitrailer trucks), sited on a natural wetland that has to be preserved, even though this presented multiple challenges for site utilities. Finally, the project had to meet very stringent energy and maintenance objectives.

History is central to this project as well. Much of Canyon Village’s original development took place during the late-1950s after the NPS undertook its massive “Mission 66” development program to expand facilities and services in parks across the country in celebration of its 50th anniversary (1966). Architect Robert Reamer, known as the “Frank Lloyd Wright of Yellowstone,” was renowned for his 1904 design of the Old Faithful Inn, and was contracted to design the original Canyon Hotel buildings in 1910. His design, considered an impressive and prominent example of Prairie style architecture, featured elegant interiors and architecture with long horizontal lines that hugged the hills above the Grand Canyon of Yellowstone, mimicking a natural outcropping. 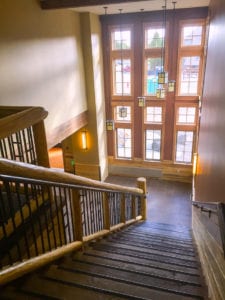 Within the new Canyon Hotel’s entry lobby stairway, cascading pendants create a beacon of “destination” from both inside and out.

The hotel complex, a sprawling Yellowstone resort that spanned a full mile in perimeter, ultimately was condemned and abandoned in 1958. As fate would have it, however, it was destroyed in an early morning fire on Aug. 8, 1960, after years of decline, debate and drawn-out demolition due to an unsound foundation.

Somehow the lighting fixtures were salvaged and installed at Frank Lloyd Wright’s Blair Residence in Cody, Wyoming, giving the stained glass pieces new life. Their salvage also created a living reference for AE Design’s new custom fixtures, which were designed to pay homage to the original Canyon Hotel built in Yellowstone Park more than 50 years before.

To aid in their research, the lighting designers uncovered historical postcards that were used as reference points for the Prairie style architecture and starting points for researching replacement lighting options. All Edison lamp replacements had to specify only LEDs that were hardy enough to withstand the harsh winters, yet match the original style. The selection and location of fixtures also required designs that fit within the parameters of modular construction (lower ceiling heights and restricted plenum space access for recessed fixtures).

Due to the remote location and condensed construction window, modular units were constructed offsite in Boise, Idaho, and shipped on a flatbed truck to the site. Thus, all lighting for all five structures was prewired and arrived on-site, ready for connection to the building’s power system. It was also critical that our choice of fixtures could withstand the 300-mile journey on the back of a rattling semitruck, yet still serve future generations of Yellowstone visitors. 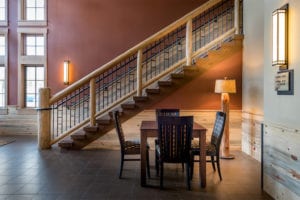 The hotel’s custom-designed sconces and lamps create a warm atmosphere and sense of home throughout.

Planning for fixture maintenance also was key as it had to be simple enough for anyone between the ages of 18 and 81 to maintain. In addition, all elements of the building design needed to withstand hard freezes for six months of the year, so fixtures had to be resilient.

Thoughtful lighting strategies also led to Dark Sky compliance, LEED Gold compliance and a BUG rating without sacrificing visitor safety – all while limiting wildlife disturbance. Even the specified exterior lighting had to withstand the weight of a buffalo rubbing against it!

Three of the lodges have been certified at the Gold level by the USGBC Leadership in Energy & Environmental Design program, with the remaining two expected to be certified to at least the Silver level.