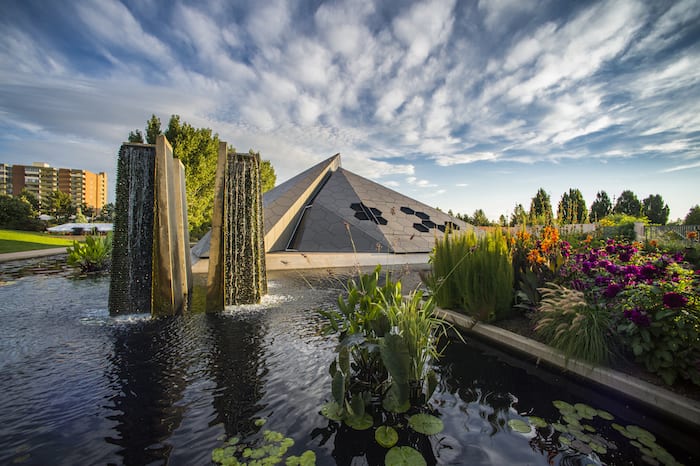 I’m sitting in a conference room at the south Denver offices of GH Phipps Construction and I notice mounted on a wall down the hallway: Our Mission Inspire, Lead, Deliver with Passion, Pride & Integrity.

Yeah, but is that how you survive 65 years in the construction business, mastering the economic roller coaster that saw many rivals go bankrupt? How does an employee-owned company not only survive, but thrive in an era of consolidations and buyouts? Certainly there must be more to the secret sauce than some idiom bolted to a wall, right?

Well, turns out that mission was the solid bedrock upon which Gerald Phipps built his construction business. And one brilliant act of benevolence insured its long term success.

Lawrence Cowle Phipps, Gerald Phipp’s father, represented Colorado as a U.S. senator from 1919-1931 and his spirit of compassion and community left a lasting impression on his son.

Phipps began working at Platte Rogers, his uncle’s Pueblo-based construction company in the 1940s. It wasn’t long before he was asked to run the Denver office and under Gerald’s leadership Platte Rogers thrived in the post-World War II building boom handling notable projects like the University of Colorado’s Farrand Hall and Denver Bears Stadium, which later became Mile High Stadium.

In 1952, Gerald purchased the Denver office from Platte Rogers and on Nov. 25, 1952, Gerald H. Phipps Inc. was born. From the start, Phipps stressed the importance of positive relationships, integrity, people over profits and community over greed.

“The Phipps family was entrenched in the history of Colorado, so they had very strong brand recognition,” says Rich Allison, GH Phipps executive vice president. “The foundation that was built under his leadership is the legacy that continues today: Let’s do things the right way. Let’s be fair and square. Let’s be good reasonable business people. That’s what makes Phipps so great and that’s what gives us an enduring quality that can span generations.“

And that approach clearly worked. By 1960, Gerald H. Phipps Inc. opened a Colorado Springs office and was soon handling the construction of signature landmarks like the Holly Sugar Building, Antlers Plaza, Cheyenne Mountain Zoo and the Colorado Springs airport.

At the same time, Gerald H. Phipps Inc. was making its imprint on Denver’s skyline with the construction of the Denver Museum of Science and Nature’s Planetarium, the Denver Botanical Gardens Boettcher Conservatory and The Children’s Hospital. Off the boards, in 1961 Gerald and his brother, already owners of the Denver Bears baseball team, purchased a controlling interest in the Denver Broncos, a move that kept the team in Denver after threats of departure from the former owner. Gerald Phipps remained owner of the Denver Broncos until 1981 and his name is featured on the Ring of Fame at Broncos Stadium at Mile High.

The Decision that Ensured Their Success

Perhaps the savviest move that Phipps ever made, of the many that marked his career, was to enact a profit sharing plan for his business in the mid-1960s that remained in place until his death in 1993. Phipps’ desire was to leave the company to his employees, so he purchased a life insurance policy on himself that paid his estate the value of the GH Phipps Inc. That windfall allowed for the establishment of an Employee Stock Ownership Plan.

This ESOP allows GH Phipps profits to be shared among their employees, as well as reward and compensate employees with pretax company contributions. It also allows for investments and earnings on these contributions to grow tax free until retirement and create an entity for employee ownership of the company. Even better? Gerald H. Phipps Inc. is a Sub-Chapter S Corporation and is 100 percent employee owned, so it does not pay any federal or state income taxes. While the tax savings is a huge windfall, according to Allison, employee ownership changes the perspective of everyone working for the company.

It’s 1977. Kurt Klanderud is an Aspen teen who loves to ski, play hockey and build things in shop class. The construction site of Aspen Valley Hospital is right across the street from his high school and almost every day he stops to marvel at the construction process and how the many pieces are coming together.

“That’s when I was hooked on construction,” says Klanderud. “And 13 years later I ended up working for the very same construction company that built that hospital; Gerald H. Phipps Inc.”

In 1990, Klanderud was hired as an estimator and today he’s president of GH Phipps. Sitting across the table from him you realize that he’ charming, approachable and funny, traits that he shares with Allison and Chris Bantner, Phipps COO.

Luckily, someone at Phipps called him back a few months after that initial rejection letter and Klanderud went on to eventually hold every position on the estimating side of the company, run the division, was appointed to the board in 1998 and eventually was named president of the company in 2007.

Core Values and Relationships Drive Everything

According to Klanderud, as he rose through the company he always kept his eye on the values articulated by Gerald Phipps back in the ’50s.

“Our mission statement for the company is to continually enrich the lives of our employees, clients and communities that we work for, so I always come back to that,” says Klanderud. “There’s been a lot of times that we’ve made decisions to preserve a relationship that has hurt us financially, because that’s more important. Standing behind your word is more important, because in the long run clients and people you work with will remember that.”

And that culture is precisely what attracted Bantner to GH Phipps last year after a 19-year stint with Kiewit. “The Number One reason that I came to Phipps was their culture. Every minute, of every day, the people here think about how they are going to treat their clients, their customers, their subcontractors, their designers, their employees … there’s a genuine sense of care and integrity that is unique, certainly at this level,” says Bantner. “The relationship trumps everything. It drives everything we do.”

Allison, who came to Phipps in 2015, is equally invested in the Phipps culture.

“I love the commitment to the integrity and hard work, treating customers the right way no matter what the outcome is for us,” says Allison. “We’re going to do it the right way, every time. That’s a core belief I hold and that’s definitely a core belief here at GH Phipps.”

Feeling Confident About the Road Ahead

GH Phipps is on track for a record $400 million in revenue for fiscal year 2018. It has grown to 500 employees, the largest ever. Employee turnover is less than 5 percent, a jaw-dropping number in this business. And a diverse client base seems to portend smooth sailing ahead.

“We find ourselves now where we have our traditional client base, which is higher education, municipal work, state of Colorado work, K-12 work, advanced technology and health care, so we’re able to maintain work through the ebb and flow of the economy,” says Klanderud. “Being diversified in terms of the markets we’re in has always served us well and will in the future.”

In an effort to remain open and honest with his employees, Klanderud hosts Phipps Talks every month, providing an opportunity for employees to come in and find out what’s going on in the company. Attendance is voluntary and there’s no agenda other than to discuss business metrics for the first 20 minutes; after that it’s an anything-goes Q&A session.

Klanderud, Bantner and Allison all know that their industry will continue to change and that GH Phipps will have to adapt to remain competitive. But, while they welcome change, maintaining the core values that built GH Phipps is important to all of them.

“We have to stay true to who we are,” says Bantner. “The challenge is how do you grow the company and still hold on to the culture and sense of family that you had with the smaller company?”

According to Allison, in addition to extensive training, the actions of executives and long-serving employees sets the tone for the newer, younger arrivals.

“If (new hires) see the way the executives talk on a dayto-day basis, how they conduct business and carry themselves, then that begins to be observed and they think ‘that’s the way I need to behave.’ They begin to learn that clients want to work with professionals who get things done in a timely manner, who are respectful, who are always executing and getting things done on time, and they’re pleasant and honorable to do business with.”

And, Allison adds, those core values are expected at every level, especially in the field.

“I do expect you to be extremely well organized when the client comes to visit. You’re respectful, you communicate, you play nicely with the design teams, yet you are very good at execution and being able to hit deadlines,” says Allison. “But, you’re a pleasant person to do business with. You’re not this cantankerous old rascal that everyone runs away from because you have the biggest bark in the trailer. Those days are long gone.

“So, it’s how well organized are you, how well do you see around the corners, how well do you plan in advance, anticipate roadblocks and derailments, and make contingency plans so that when you get there you already have a solution. And that’s part of building a brand and how you get work. You earn your next job based on how well you do on your current one.”

Allison is explaining all of this with passion, as I glance up to those words mounted on the wall.

“I really see that as who we are and I see that continuing based on the fact that we’re an ESOP. Everyone owns a piece of this brand and they will continue to look out for our core values.” How could they not? After all, the writing’s on the wall.