Greenway could pave path toward redevelopment 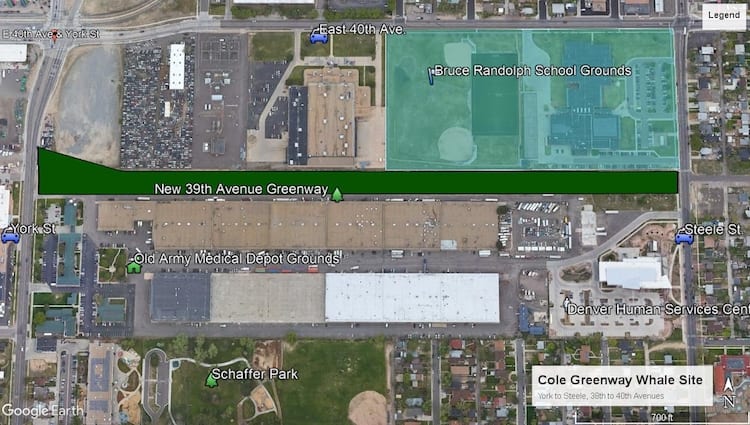 This is the seventh in the series on Denver’s “Whale Sites,” defined as extremely prominent and underdeveloped land parcels whose size and location will define Denver’s future growth and development. Examples include the Burnham Yard, Upper Fox, Elitch Gardens, Broadway Station Area and Denver Design District.

Sometimes a significant real estate opportunity is in a counterintuitive location yet displays traits that wreak of potential. The block bounded by 38thAvenue, Steele Street, 40th Avenue and York Street is exactly that whale site. It contains unusually large assemblages, with a mixture of National Register of Historic Places buildings and heavy industrial uses. 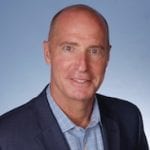 At its northeast edge of 40thand Steele sits the Bruce Randolph School, while Schafer Park abuts on the south. Most significantly, its industrial character is slated to change, due to a pending large public investment in the center of the site.

The public investment is the 39thAvenue Greenway, also known as “the ditch” or Platte to Parkhill drainage improvements. Contrary to the “Ditch the Ditch” proponents/opponents, and despite its underlying, mundane function, the greenway must be seen as a transformative investment in the Cole neighborhood.

The greenway will mix some of the urban seclusion of the Speer Boulevard portion of the Cherry Creek trail with the best parts of Denver’s finest parks. But unlike many parks, the greenway will be an entirely new 12-acre linear amenity serving a mixed residential and industrial area. West of York Street, 6 acres of greenway slices through a Coca-Cola bottling plant, providing an appealing connection to the 38thand Blake light rail while more directly serving an existing residential neighborhood. The eastern 6 acres is centered within the 18-block whale site. It will offer up direct access to the private development at its edges and as a result force reconsideration of current industrial uses.

The unimproved area slated to serve as a greenway through the middle of the whale site was acquired by the city in 2016. It normally would form 39thAvenue between Steele and York but has instead served as a railroad-owned vacant lot.

The “old Army Medical Depot” site south of the 39thAvenue greenway provided a variety of services to the federal government and the city between 1942 and 2007.  Five or six separate owners control the depot buildings and remaining land south of the new greenway. Most of it is zoned I-1 (heavy industrial) under the city’s old zoning code.

The largest landowner manages approximately 562,000 square feet of warehousing in the depot land, while the second largest controls the 4.5-acre former Inner City Health Center. The latter is zoned B-2 under the city’s old zoning code.  The warehousing and former health center buildings are or will be landmarked; their historic character offers some truly unique redevelopment opportunities.  The city of Denver controls the existing Human Services Center offices, as well as the 8.5-acre Schaffer Park immediately south of the depot buildings.

On the north side, another four or five large opportunities exist. Excluding the Bruce Randolph School, 19 acres of industrially zoned land will soon abut the new greenway. Xcel, the Regional Transportation District and the city control 6.6 acres of this land. One current use is a straight-up auto parts storage yard, something that used to be called an old-school junkyard. Another site is an Xcel substation, which will likely be extremely difficult to relocate. On the southeast corner of York and 40thsits 3.3 acres of largely vacant, RTD-owned land. Each of the sites will have some cleanup needs, but it will be hard to bet on their industrial character over the long run.

Outside of the greenway, the city’s land planning work appears to be just getting started. The Northwest Cornerstone Collaborative’s boundaries extend just across 40thAvenue. They have studied transportation improvements along 40th.

More significantly, the city’s ongoing “Denveright” planning document has identified this area as one expected to experience “significant character change.” This recognizes both the new greenway and its 1-mile distance to two A Line stops. Denveright’s draft Future Places Map labels the site a “Community Center,” which is intended to suggest a destination for surrounding neighborhoods and a live-work-play environment. It is also identified as an “Innovation/Flex” district, which is not clearly defined but suggests an employment center. This terminology should get fleshed out as the update to Blueprint Denver reaches the adoption phase later this year.

Looking over the south side of the new greenway, one has to recognize the large scope of warehouse buildings, which offer up some amazing space-conversion opportunities. Several of these will overlook the greenway.

The primary owners of the warehouse buildings are the folks behind creation of the Denver Central Market block in RiNo. The historic buildings west of the warehouse structures, recently acquired by longtime Denver developer Jerry Glick, will be maintained and appear to offer a more residential character.

One bold idea would be creation of a pedestrian connection or greenway between Schaffer Park on the south to the new proposed greenway, essentially connecting new and existing parks in the neighborhood, and overcoming the series of large structures that separates the two open space areas. A service street will also hug the greenway between the depot warehouse buildings and the park, suggesting attractive retail and restaurant space. In the short term, think food truck parking.

Other than the school, the north side of the 39thAvenue greenway offers the most prominent new development opportunities. Obviously, the Bruce Randolph School will remain but could be enhanced with connections to both the new greenway and to Schaffer Park. West of the school it’s fair to anticipate some residential development or perhaps more office, creative or flex space.

It’s hard to imagine that the junkyard will remain. In contrast, the Geotech environmental equipment company at 2650 E. 40thappears well-established. The challenge for both the city and these landowners is coordinating rezonings, as some owners will struggle with the economics. In these multi-owner situations, piecemealing separate parcels often results, making it harder to establish the density, placemaking opportunities and innovative connections to the A Line that group rezoning could help facilitate. If one had to predict, these 19 acres could handle mixed-use commercial zoning up to five stories, which could create both employment/office space as well as residential uses.

Critical features on the development portion will include affordable housing and connections to the 40thand Colorado and 38thand Blake light-rail stations. This land is a poster child for “last-mile” connections to rail transit stations, which is a figurative way to describe the need to avoid overparking and enable quick access to rail transit that is not quite within walking distance.

The north side will also want to buffer itself somewhat from the train tracks, industrial uses and 40thAvenue traffic. Meanwhile, the south side brings building character and savvy ownership. They have time, patience and capital, along with curation skills. The details are being advanced, but it will eventually be its own “place” that will enjoy a symbiotic relationship with the new greenway to the north, the existing park to the south, the broader Cole neighborhood and the established development  buffering its edges.

The northern edges of Denver’s Cole neighborhood bump up against RiNo, Elyria Swansea and the A Line, where it quickly transitions to an industrial character. This transition area is evolving without much attention. However, similar to RiNo, it is now seeing significant public investment, and a little RiNo history is worth comparing.

Just under five years ago the city of Denver was providing financial incentives to the Great Divide Brewing Co. to place a brewery and bottling facility at 35thand Brighton Boulevard. The site enjoyed light-industrial zoning, and a small adjacent tasting room seemed appropriate to the then-obscure location. Control of land intended to serve a new park along the river was being negotiated, and the new brewery thought a beer garden on the park might work in a future phase. The Brighton Boulevard overhaul was under discussion, the Source food hall was just getting going, and the Platte River Promenade was considered futuristic. Four years later, that same stretch of Brighton Boulevard is hard to recognize.

In contrast, the public investment in the Cole Greenway is already taking place. As of 2020, it will be the greenway portion of the Platte to Park Hill drainage infrastructure and the spine for this whale site. The land around it is within 1 mile of two light-rail stations and will enjoy more than 12 acres of new recreation space. With completion of the greenway, look for the redevelopment pressure to heat up.