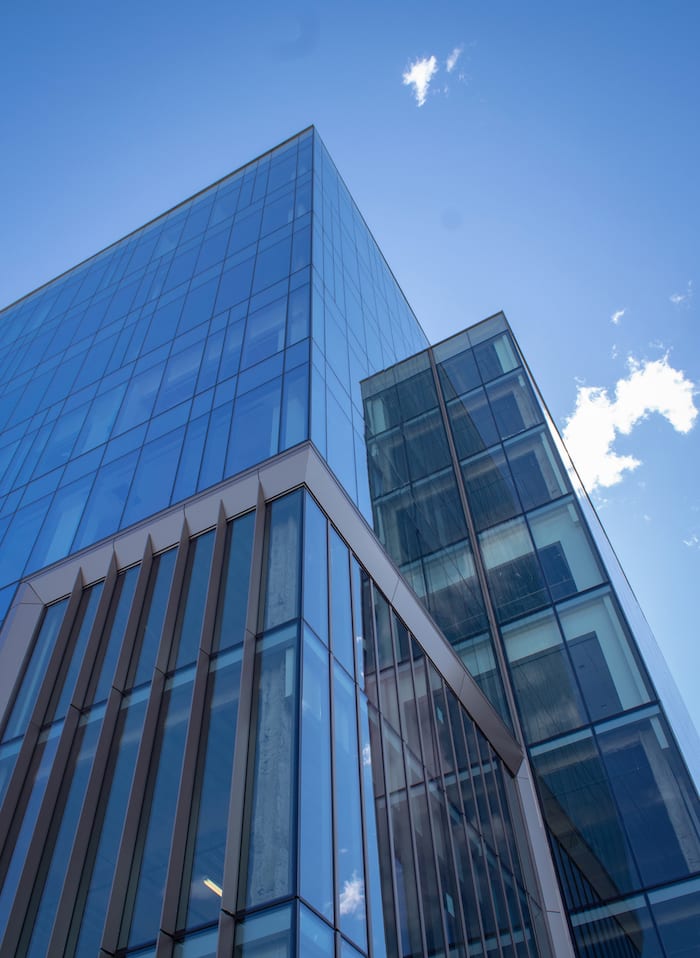 Financial House is the first all-curtain-wall building in Cherry Creek North, setting a precedent in the neighborhood.

The facade of Financial House stands out. It’s the first all-glass building in Cherry Creek North.

The eight-story, 70,000-square-foot office tower might just be a harbinger of things to come in Denver’s toniest neighborhood.

“This all-curtain-wall building sets a new precedent in Cherry Creek,” states Matt Cecere, 4240 Architecture’s principal-in-charge. “It provides moments of translucency and moments of reflection. In a way – it’s playing off of what’s around us, because we’re literally reflecting all of it. In a similar vein, Cherry Creek is a ‘see and be seen’ district,” Cecere adds, recalling early design meetings for the project. “We kept coming back to this idea of style. Fashion is something that is fleeting. Style is something one always possess.” To elaborate on that point, he continues, “Every detail matters. With a minimalist design, you can’t make a mistake. You can’t cover it up.” 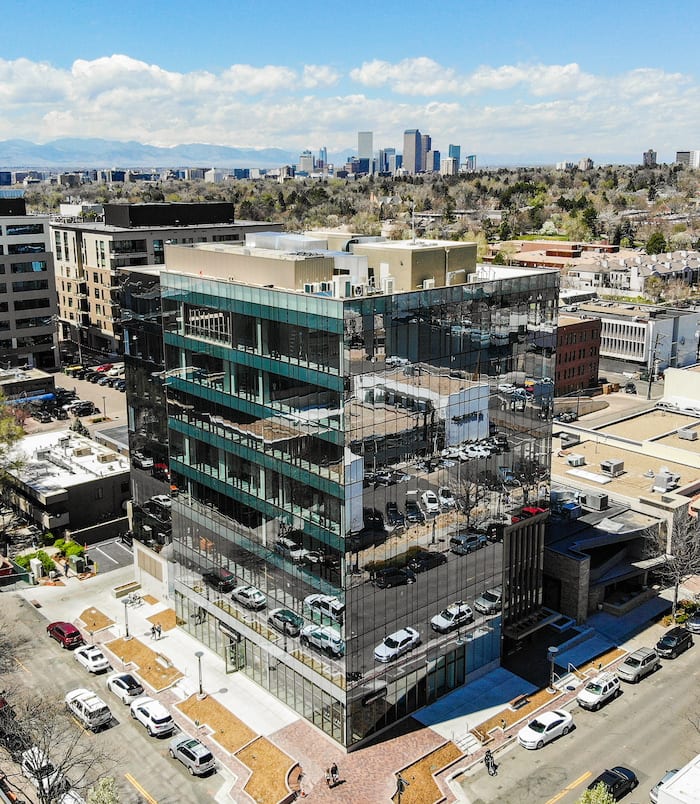 The curtain wall is at once something that fits into the current fabric, but also what is coming down the road, according to the architect. Courtesy Rocky Mountain Photography

One critical aspect was “looking at how the building really engages the street,” says Cecere. This was accomplished in part by way of heightened articulation and detail at the retail and on the curtain wall around the corner entrance.

“Coupled with that, it’s really integrated with the existing fabric to the north,” he adds. “There’s an indoor/outdoor relationship.” A courtyard on the north side of the lobby is the focal point. “There’s actually a gap between the two buildings creating an open space,” says Cecere. “It will be utilized by the public, and by the tenants alike.”

There’s also a relationship between past, present and future – which brings us back to the curtain wall. “It was at once something that fit into the current fabric, but also what is coming down the road,” says Cecere, noting that he thinks it will have a catalytic effect on projects to come. “The client took a calculated risk that has become highly successful. It’s 100 percent leased.”

“We were pushing the envelope in a lot of ways, setting a new standard for excellence,” he adds. “That’s something BMC has been doing with a lot of its projects in Cherry Creek,” most notably the St. Paul Collection and the Moxy hotel. “Each one is really trying to change the marketplace. Financial House takes it to another level for the office market.” 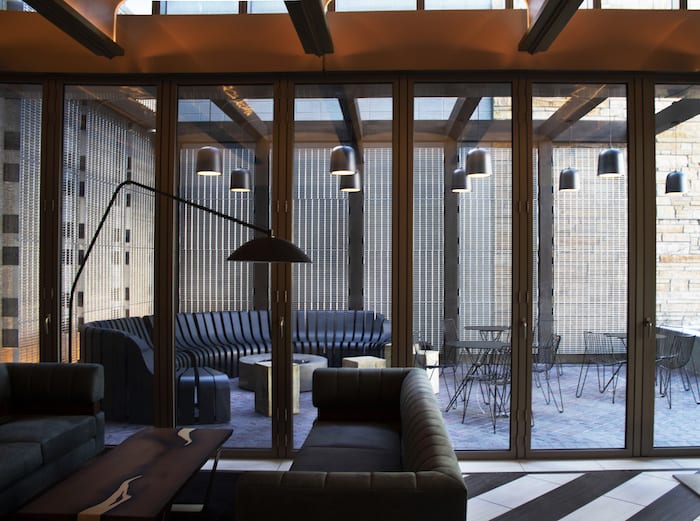 A courtyard on the north side of the lobby is the focal point.

4240 worked with BMC on the St. Paul Collection, the luxury apartment project three blocks east, and recently worked on a residential project at the base village at Snowmass with Haselden.

This comfortable working dynamic helped keep the project on track on a constrained site in a busy area. The above-grade steel frame is one example. “We had to figure out ways to get it on site very quickly so we weren’t disrupting traffic,” says Cecere, commending Haselden Superintendent Andy Murray for “an incredible job” coordinating with the Cherry Creek North Business Improvement District and other stakeholders.

(Cecere notes that the Haselden approach runs counter to the Cherry Creek’s see and be seen culture.  “Instead, they seek ways to minimize disruptions in this bustling district.”)

“Logistics was a large challenge,” says Zach Belsey, project manager with Haselden. “There’s a major encumbrance for this building.” He notes that the two-level, below-grade parking garage juts out under the sidewalk. “We had a parking lane to work with while underground.”

Another issue was providing enough parking on the 12,500-square-foot parcel. The initial designs called for three stories of below-grade parking, but that was consolidated to two stories with car stackers on one level. “That is a pretty unique part of the building,” says Belsey. “The cost and scheduling savings – and where the water table was – it was a lot more beneficial to do car stackers.”

Regardless, Belsey says the project stuck to its target timeline after groundbreaking in late 2017. “It was a pretty fast schedule,” he notes. “We were up to grade in about four months, we topped out six months after that and were fully enclosed six months after that.”

The definitive element: the glass curtain wall. “The curtain wall is all unitized,” says Belsey. Manufactured by J.R. Butler of Englewood, the curtain wall was preglazed in the factory. “As soon as it’s placed, it’s watertight.”

Belsey commends design-build partner 4240 for helping keep the project on schedule. “We had to deal with some pretty big challenges while we were building out,” says Belsey, citing tenants adding a “communicating stair” and a NanaWall when construction was well underway.

Amazon opened its first brick-and-mortar bookstore in Colorado on the ground floor in March. “They actually sell books – which was a surprise to everybody,” laughs Belsey.

Next up for Belsey: a hotel project in Cherry Creek North, also with 4240. Looking around at the new mixed-use landscape of loftier buildings with residential and office space complementing the storefronts on the sidewalk – and plenty of cranes on the horizon – he sees the projects as part of an ongoing evolution in the neighborhood. “It’s not going to slow down,” he says.