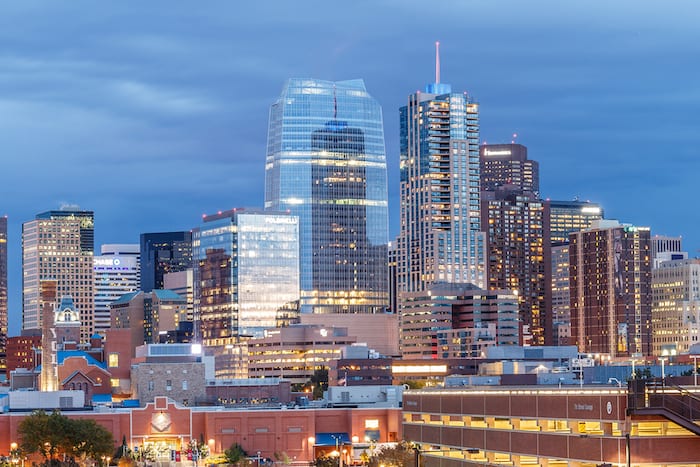 1144 Fifteenth at night during the final phases of construction. The signage was not yet installed.

Milo Ketchum Jr., the Lakewood-based engineering firm’s founder, was something of a renaissance man.

He was an educator, musician, sci-fi writer and a pioneer in consulting engineering. Some of his work in the building trade reflected his future-leaning vision, like the arched Rainbo Bread building in Denver and a stylized TWA maintenance hangar in Kansas City.

That all changed with the launch of KKBNA and like-minded firms across the U.S.

Ketchum’s philosophy was rooted in education and entrepreneurialism. He’d teach students at the University of Colorado, hire them, then encourage them to strike out on their own and open their own businesses.

“That’s kind of dumb to be creating a bunch of competitors all the time,” laughs Petersen. The entrepreneurialism subsequently became an internal effort: “Why not get people innovating within the company?”

One example: John Lund, structural principal, launched Martin/Martin’s investigative engineering division circa 1999. “Now we have about 20 people in that group,” Petersen notes. 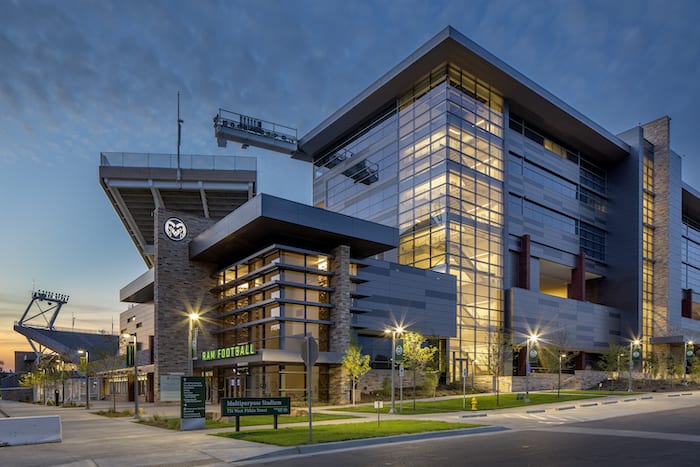 Petersen joined the firm out of college from the University of Colorado Boulder in 1984, right when an oil bust started hitting Denver particularly hard. After growing at a steady clip for four straight decades, the firm contracted from about 200 employees to about 50.

Martin Associates bought the firm in 1988, and the firm became known as Martin/Martin in August that same year. The Los Angeles-based holding company bought several other firms across the West as the economy hit bottom. “We developed much more robust business practices,” says Petersen.

Incoming leader Jack Martin “increased focus on business and practices,” says Petersen. “He would have each one of his project managers in his Los Angeles office come in every Friday, present their projects and ask him questions.”

The firm resumed its growth trajectory with a string of professional sports venues in the 1990s, including the homes of the Arizona Diamondbacks and San Jose Sharks. “That jumpstarted our business,” says Petersen, “and we’ve been growing ever since.”

The firm largely dodged the most recent recession with a “purposeful” shift into the public sector, says Petersen. The balance of civil, structural, and investigative work helps keep the firm less beholden to the whims of any one market. “We don’t grow very fast and we don’t shrink very fast,” says Petersen. “We’re very methodical about things.”

Projects like the $623 million Saint Joseph Hospital in Denver and a steady stream of contracts from the U.S. Army Corps of Engineers kept Martin/Martin on an upward track as other firms faltered.

That’s translated to three consecutive years of 30 to 40 percent growth and 75 new hires. Martin/Martin now has about 250 employees, with 200 based at the Lakewood headquarters and the balance at six branch offices from California to Arkansas.

Home of the Arizona Diamondbacks: A panoramic view of Chase Field from behind home plate with the retractable roof open.

Work often starts on the Front Range, then leads the firm elsewhere.

“We follow our clients when they’re in other places,” says Petersen. “That has taken us to Europe and Asia, and we’ve got a job in Kazakhstan right now.”

Like Petersen, Martin/Martin Principal Raymond Tuttle joined the firm fresh out of college in 1984. He’s since worked on land development projects at Candelas in Arvada, Westminster Promenade and Southshore in Aurora, and he’s directed the firm’s civil department since 2016.

Tuttle describes Martin/Martin’s structure as “small companies within a larger company.” He notes, “It’s an interesting model. The company provides a business structure, if you will, and the principals then with some constraints are pretty autonomous in finding markets they like to work in.”

That doesn’t equate to winging it; it’s more about harnessing natural synergies. “It’s not like we’re on our own islands,” explains Tuttle, “but we do have a lot of freedom to pursue projects we want to pursue.”

Take Ben Nelson, who started at Martin/Martin in 1984 within a few months of Petersen and Tuttle. When he’s not the firm’s director of structural engineering, he plays trombone with the Jeffco Brass Ensemble. “For 45 years now, I’ve played every day,” says Nelson, who even participated in a few jam sessions with Milo Ketchum Jr. on harpsichord.

Nelson’s love of music led him to pursue engineering work at music venues, and he’s worked on projects at the Ellie Caulkins Opera House, Red Rocks Amphitheater and other renowned stages.

“I’ve encouraged my staff to follow that same passion,” says Nelson. Exercise buffs have pursued projects at recreation centers, and sports fans have gone after stadiums and arenas.

Josh Gould, vice president of Stantec in Denver, says he’s worked with Martin/Martin “on everything from office buildings to advanced manufacturing and high tech to university projects. They’ve just been consistently stellar.”

Stantec is currently working with Martin/Martin on the West Lot redevelopment at Coors Field, complete with office space, a hotel and residential units slated to start coming online in 2020.

Martin/Martin is “providing structural [engineering],” says Gould. “You don’t have to go to two different shops.” The collaboration is already paying dividends. The West Lot design includes a shared five-story amenity deck with fitness center acting as a bridge link between the residential and hotel building at the roof. Martin/Martin engineered the bridge to become an integral part to the project lateral system that reduced the impact to each of the towers acting on their own. When critical structure combines with feature architecture, collaboration is a necessity. “They’re just excellent at coming up with the right solutions,” says Gould.

Gidez, who previously worked as an architect with Denver’s Fentress Architects, has collaborated with Martin/Martin on such projects as the Colorado Convention Center and the David Skaggs Research Center in Boulder.

He also highlights the federal courthouse in Cape Girardeau, Missouri, built in 2003. “The local politicians didn’t like that modern look in their sleepy old town,” he says. “It was not only a challenge from a political perspective, but it was a technical challenge as well.”

Martin/Martin helped devise a braced frame that met the federal security requirements as well as the vision of city leadership. “It solved the problem,” recalls Gidez.

Gidez says he was introduced to KKBNA as a graduate student in architecture at University of Colorado, Denver, in the early 1980s. The firm’s since-retired Charles Keyes was Gidez’s technical advisor on his thesis project.

“Chuck was a people-oriented person,” says Gidez. “Jack [Petersen] is a continuity of that.” He adds, “Not only are they professional relationships, but they’re also personal relationships. We socialize, we go to events, we have bonfires.”

Nelson says that dynamic started with Milo Ketchum Jr., who would meet Martin/Martin staffers for a weekly “legacy lunch” well into his eighties before he passed away in 1999.

Ketchum would start with what he knew – structural engineering – and envision what housing would look like on a planet with extreme winds or low gravity, and use that as a springboard for extraterrestrial adventures.

“He was far ahead of his time,” muses Nelson. The same can be said for the firm he started.