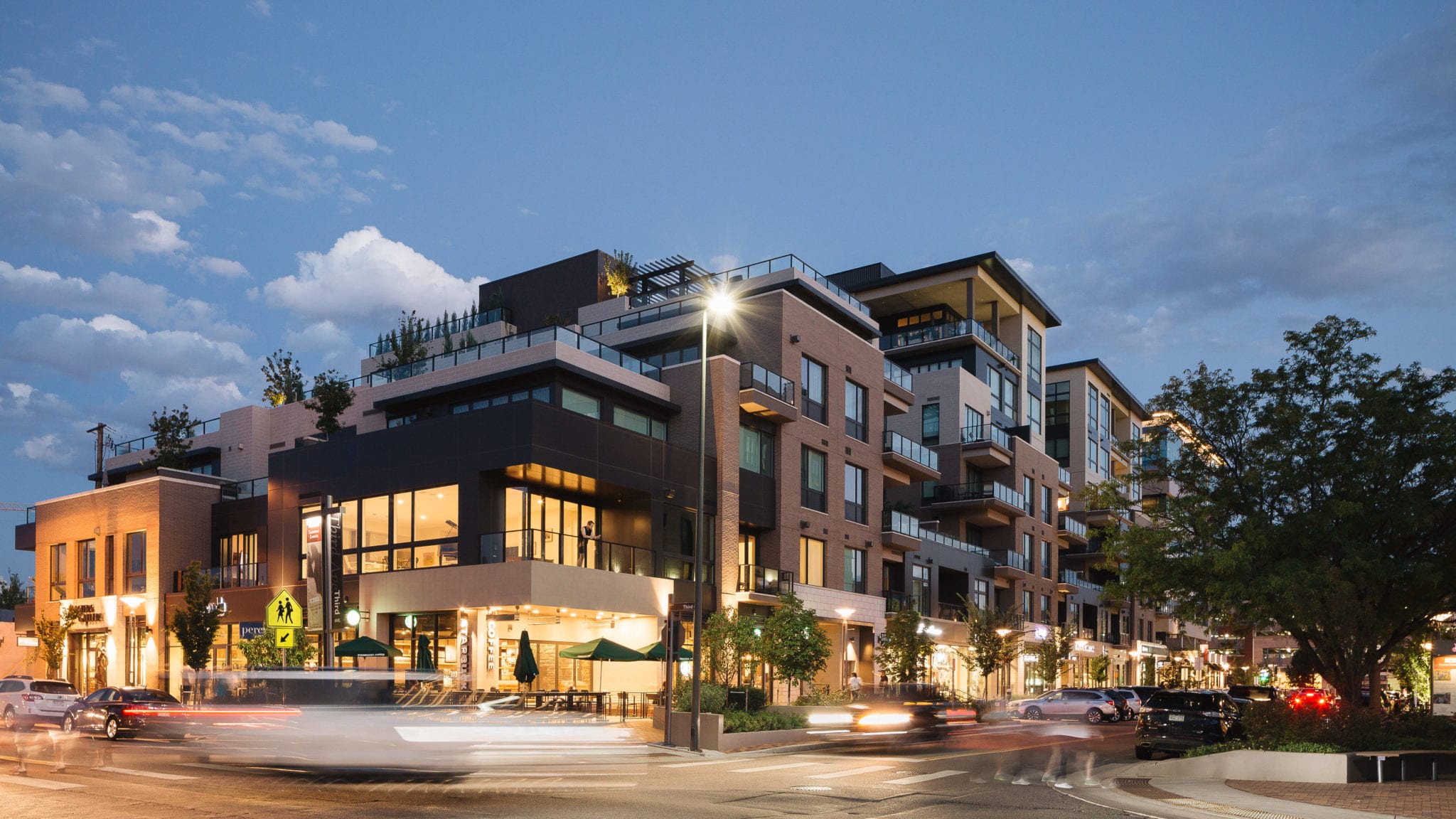 250 Columbine has become an iconic part of the Cherry Creek skyline with a tiered design that allows easy access to private and shared outdoor spaces. Courtesy JC Buck

For more than 50 years, award-winning firm OZ Architecture has shaped, and been shaped by, its home state of Colorado. With 165 employees in offices in Denver and Boulder, OZ provides architecture, master planning, interior design and, more recently, brand experience design to clients and projects across the U.S., and in Africa, Asia and Antarctica. Its portfolio includes a host of iconic “I didn’t know they designed, that, too” work and a wide variety of project types, from academic (University of Colorado’s Center for Academic Success and Engagement, University of Colorado Colorado Springs’ University Center) to retail (Punch Bowl Social, Platform T) to corporate/office (SmartWool, Alteryx) and civic (Van Cise-Simonet Detention Center, Silverthorne Performing Arts Center) – not to mention a bevy of well-known multifamily, hospitality, medical, assisted-living and mixed-use campuses. 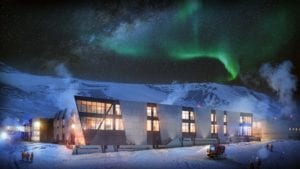 McMurdo Station in Antarctica is an example of OZ’s global reach with a local approach, both improving the efficiency of scientific research and the quality of life for those stationed at the base.

Ask nearly any OZ team member or alum what drew him to the firm, and you’ll get a similar answer. It’s not the quality of the work, so clearly evidenced by a consistently full docket and an office full of awards and publications. It’s not the terrific clients who challenge and trust the team with meaningful projects, or the co-workers whose encouragement and complementary talents bring about all the great projects. It’s not even the firm’s strong support of professional and personal growth. But, in a way, it’s all of these. Inevitably, you will hear how much each values the culture.

Principal Kelly Davis, who, like all of OZ’s leadership, is involved in multiple project types, recalls, “When I moved here [Boulder] in ’95, it was booming, and I had maybe a dozen job offers, all in Boulder, which I didn’t expect. It was down to two, OZ and another firm that was competing on a job. The other firm actually won the project, but I liked the OZ culture – and their design – better. It was the best decision I ever made.” Tracy Tafoya, a principal who started as an intern and now heads the interior design studio, adds, “I’ve grown up in this place. It’s like a second family – the clients, the culture are really compelling.” 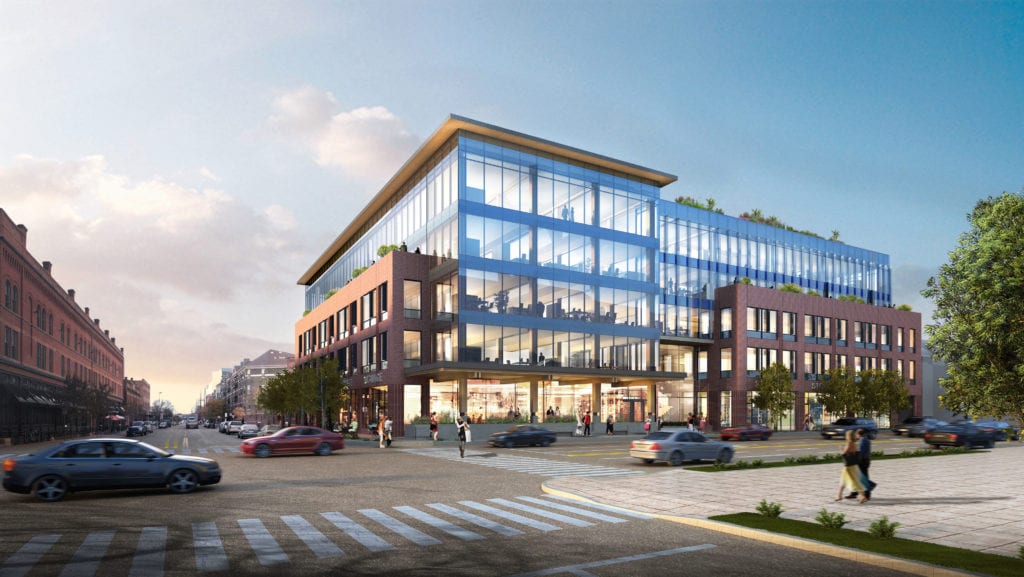 When Davis describes the firm’s portfolio as “focused on diverse, impactful design,” fellow principal Rick Petersen agrees, adding, “Here there is diversity, the opportunity to grow without limit to have an impact on the community.” While the firm has completed dozens of noteworthy, award-winning projects in its five decades, there are inevitably favorites. Asked to share some of those that best represent OZ, Davis, Tafoya and Petersen discussed an eclectic list of work that spans project types and eras. A few of the more recent projects named include 250 Columbine, a Cherry Creek area condo/mixed-use development, the World Trade Center Denver building in River North, a health and community services campus in Longmont, and McMurdo Station in the climate extreme Antarctica.

Nearly every company can cite a vision and values, but few seem to have aligned with them as powerfully as OZ. Words from the vision and values crop up constantly in conversation about the firm, its work, and its future. The OZ vision includes “embracing the ‘freedom to take risk and push the industry’ to build a practice that is ‘significantly diverse and unique,’” and it’s regularly noted as a guide point for firm decisions. Its five values – making others successful, pioneering, an attitude of openness, stewardship of community and upholding the OZ continuum – are equally respected. 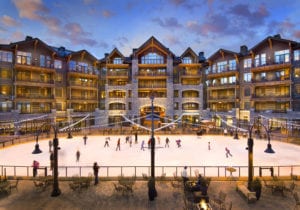 As the nation’s first LEED certified resort village, The Village at Northstar in Lake Tahoe, California, is a beacon of sustainability in OZ’s extensive resort experience. Courtesy Vance Fox Photography

The idea of the continuum, which casts current employees as caretakers of the past and nurturing forces for the future, is what Davis calls “the singular idea or overarching thing that makes OZ special.” The firm traces its roots to 1964, when Alan Zeigel (the “Z” in OZ) founded Everett Zeigel with a partner and began designing notable projects including several for the National Park Service. Fast-forward just over 20 years, when Zeigel and former co-worker (and CU Boulder alum) Tom Obermeier (the “O”) decided to combine their individual firms. Since then, OZ has flourished by pairing thoughtful growth with honoring the founders’ idea of architecture that honors people, place, and timeless design.

With its strong ethos, solid footing, and talented people unafraid to reach for the future, OZ, now in its third generation of leadership, is certain to continue transforming the built environment for the next half-century – or more.

Principals Kelly Davis, Rick Petersen and Tracy Tafoya share their thoughts on a few of their favorite recent projects.

• Platte Fifteen – Denver. When complete, this five-story mixed-use project will include the city’s first cross-laminated timber building. With communal spaces, open layouts and a “pedestrian-friendly” ground level, Davis explains that the artisanal construction technique was chosen to honor the modern craft movement and create a “warm aesthetic within an environmental context.”

• 250 Columbine – Denver. When it was built in 2015, this mixed-use Cherry Creek development delivered one of the first new condominiums in a decade. Its nearly 140,000 square feet of residential space (71 units) are complemented by 30,000 sf of retail and a 90,000-sf, eight-story office tower. Not only did the units sell out, but also resales have set a new benchmark for pricing. Tafoya says the design team, with client Western Development, worked hard to “understand what people want to spend [their money] on, defining what is appealing now, not just to a wide demographic, but a design that will also be timeless.” 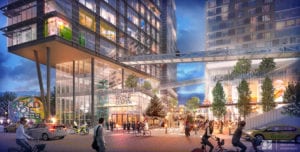 • The World Trade Center Denver – Denver. This mixed-use development, currently in construction, will bring new office, dining, retail, hospitality and creative space choices in Denver’s bustling RiNo neighborhood when it’s completed in 2019. Noting that OZ has an office and 11 completed projects in RiNo, Petersen describes the team’s design as simultaneously a contextually appropriate building within “our town and neighborhood” and a projection of Denver’s role as a creative, collaborative leader in the global arena.

• McMurdo Station – Antarctica. At nearly 60 years old, this sub-zero, year-round campus with 160 acres and more than 100 buildings required numerous upgrades for efficiency and overall living conditions. Petersen, who has visited the site several times, describes crafting a master plan and design for McMurdo as one of the most fulfilling projects” imaginable, an opportunity to help “create community while supporting the mission of global science.” OZ’s master plan centers on consolidating the 100-plus buildings into six (much more efficient) modular prefabricated units; the design includes amenities such as glassed-in conference rooms, lounge spaces and open work areas. Tafoya was one of three staff members who made a five-day site visit before starting the programming work. She says it was a rare opportunity to see first-hand the very unique needs of the 250 people who choose to live in such inhospitable conditions yearround in the name of science.

• St. Vrain Community Hub – Longmont. The 75,000-sf south wing facility offers Boulder County residents access to multiple health care and community services providers in one facility. Designed with sustainability in mind, it incorporates numerous renewably and locally sourced materials including an interior wall made of reclaimed timber of a local church. Tafoya says the project distills the OZ value of stewardship, functioning as a sort of public “living room,” an energized gathering place that both clients and employees want to be.

• The Village at Northstar – Lake Tahoe, California. With 127,000 sf of retail and 320 residences, this complete redo was the first resort village project to achieve LEED certification. Davis described the challenge of developing a “completely new village” without losing sight of the history and environmental value of the noted ski resort. Completed in phases about 10 years ago, this project represented a new high-water mark that inspired future resort design improvements.