Peeling Back the Layers: Historic Restoration of State Capitol Chambers 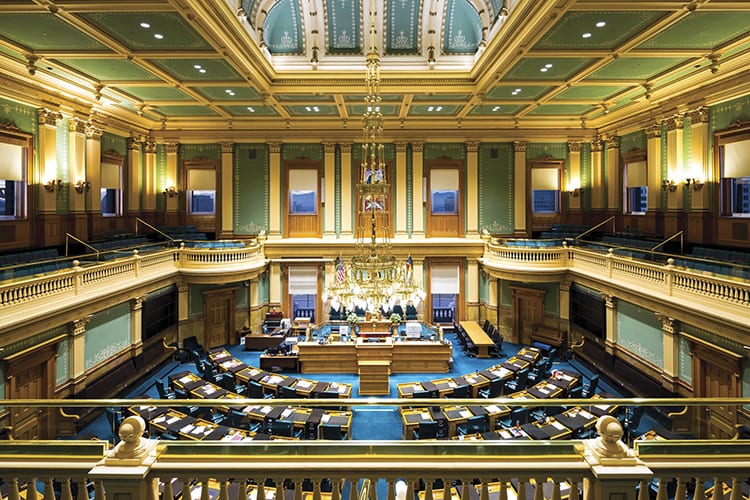 The need for a simple radiator repair within Colorado’s State Capitol House and Senate Chambers ultimately set in motion a complex restoration project that opened up long-obscured skylights, revealed beautiful hand-painted stencils and, in the words of Lance Shepherd, the manager of design and construction programs at the office of the state architect, “returned the stateliness to the chambers.” 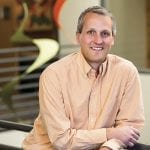 While the before and after images reveal the dramatic changes achieved by the design-build team led by Spectrum General Contractors, the story of how this incredible historic restoration was actually accomplished is yet to be told.

In 2013, state officials selected Anderson Hallas Architects and an assembled design team to oversee the restoration, which included the updating of acoustics, lighting and audiovisual systems within the two chambers. Our firm was tasked with delivering an integrated lighting solution that melds design expertise with electrical engineering for this 11,500-square-foot interior restoration project – a 2016 AIA Colorado Award of Merit for Commercial/Institutional projects recipient. 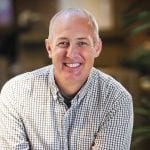 With History Colorado overseeing the designers’ recommendations every step of the way, the process evolved as site walks, findings reports, treatment recommendations, in situ mock-ups and reviews became the norm.

After the original hidden 30-by-30-foot ornate skylights (recessed within the attic space just above the acoustical panel ceilings) were revealed, the team began to remove the no-frills, 1950s-era acoustical tiles covering the walls and ceilings. Long-rumored magnificent works of decorative art, dating back to the capitol building’s original 1905 construction, gradually became visible. With the assistance of Built Environment Evolution, a restoration specialist, the panels’ original colors, materials and details were identified, along with the best process for recreating and restoring them in the most historic way possible. 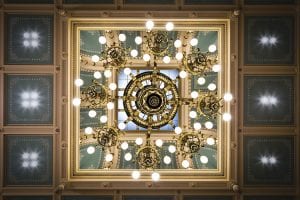 Our lighting expertise moved front and center when it was discovered that the removal of the panels covering the concealed skylights reduced the number of available light fixture openings by half. To keep the building’s historic integrity intact, our lighting designers worked diligently to maintain pre-restoration light levels without adding any new fixture openings.

“Because our objective was to reopen the skylights, hidden behind the false, drop ceiling installed in the ’50s, and restore the historic grandeur to this beautiful space,” shared Bryan Jass, project manager at AE Design, “we needed to upgrade and add the appropriate level of lighting without taking away from the beauty of the original skylights.”

“Because this was an important historic restoration for the state, we were not allowed to touch the original fabric,” explained Vannessa Pederson, the project’s lighting designer. “That not only applied to the skylight restorations, but the work surfaces below them as well.” 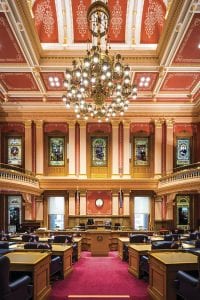 The two 50-foot-tall chandeliers, which originally were gas powered, were also found to be in great disrepair and out of compliance with modern day UL-listed electrical code. So we sourced a restoration company in St. Louis, where the huge chandeliers were completely dissembled. The fixtures were retrofitted with modern light bulbs, and most of the original glass globes were custom recreated.

According to the historical architects at Anderson Hallas, one of the original chandelier globes, beautifully etched with the state seal, was rescued from a secondhand shop by a state employee and used as a model. While the budget did not allow for the added embellishment and expense of etching, the designers were able to create replacement globes that closely matched the shape, translucence and beauty of the original globes.

Our firm also was tasked with replacing all down-lighting. Because the chambers’ ceilings are concrete, the team was not allowed to drill cores for new fixtures, so to provide lighting that equaled the previous level of foot candles, we used bright, highly efficient, precisely directed fixtures to update the original 1950s-era lighting. 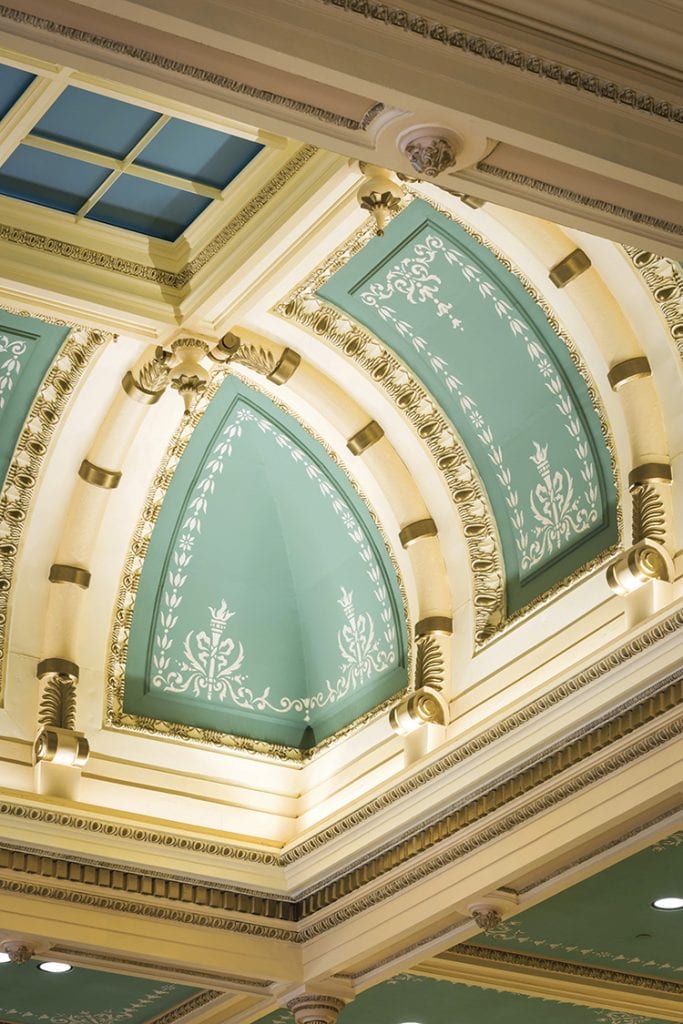 The fascinating story of the restoration of Colorado’s State Capitol House and Senate Chambers would not be complete, however, without emphasizing the role craftsmanship had in bringing this extraordinary rehabilitation to life. Over 50 individuals worked as dedicated craftsmen on site, including nearly half of Spectrum General Contractors’ project team as well as other specialized subcontractors that provided unique craft services like custom metalwork, chandelier restoration, stained glass restoration and stencil art.

The project was also supported by 37 subcontractors and 46 companies working as suppliers, or offering services on behalf of the project, with a total of more than 75 personnel on site to make this historic restoration a reality.

“This very challenging undertaking by the design, consulting and construction teams resulted in the success of this very unique project,” said Jessica Bohl, assistant project manager of Spectrum General Contractors. “The restored chambers are a beautiful example of technical and craft expertise coming together for a stunning result.” \\