That greater thing is Prism, a gleaming, nine-story, 101,118-square foot core-and-shell office building via the efforts of Shea Properties, Davis Partnership Architects and GE Johnson Construction. Prism may be small in comparison to the other office towers sprouting up around the city, but thanks to one dazzling, eye-grabbing wall, it packs a powerful visual punch.

The Road to Prism

In 2007, Shea Properties purchased that block-long parking lot and immediately began collaborating with Denver’s Davis Partnership about what to do with the site.

“So, we looked at lots of different options and were thinking maybe a hotel or high-rise office building,” says Davis Partnership’s David Daniel, principal designer for Prism. “And then just prior to the (2008) recession, we had construction documents for a major office building there and were close to getting tenants signed but then the bottom fell out of the economy and we had to start over.”

According to Peter Culshaw, executive vice president of Shea Properties, when the economy started to pick up again in 2011 a few factors had changed for the developer.

“One, we thought the bet on a 400,000-square-foot office building was larger than we wanted to make at that point,” says Culshaw. “And the second thing was that by then we had actually successfully developed quite a few apartments in the suburbs and we had a feel for what we were doing there. So we basically made a shift to decide to do a mixed-use project, which would be what’s there today with Prism and The Quincy.”

The road to Prism: In 2007, Shea Properties purchased that block-long parking lot and immediately began collaborating with Denver’s Davis Partnership about what to do with the site.

Shea decided to split the block and so prior to Prism, Shea built The Quincy, a 28-story, 359-unit, luxury apartment community with high-end amenities including a rooftop deck with a striking glass-sided swimming pool, resident lounge and more.

In addition to all of the amenities, The Quincy has seven floors of parking, which Culshaw says was the plan to cover both properties.

“The concept was to build more parking than we needed for just the apartments at The Quincy,” says Culshaw. “So part of that mixed-used concept is that we built a parking structure that accommodates The Quincy, Prism and actually has additional parking leftover for the general public.”

The Vision of Prism and the Glass Crinkle Wall

With The Quincy taking such a large footprint, it became a realistic view that Prism would be a boutique office building. With its office floor plate of 12,000 square feet, the vision was to wrap the space in glass, so three sides are adjacent to glass and the core is nestled against the side with masonry. The ground floor is home to retail and lobby. 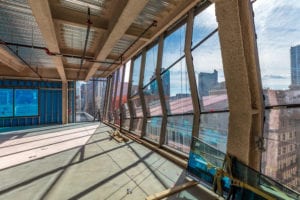 The Prism’s “crinkle” wall is unlike anything else downtown.

The teams at Shea and Davis chose 14-foot-high floor-to-ceiling windows, and tenants will have the option to go sans ceiling for more of an industrial/loft feel. But, they also wanted something that would be unlike anything else in Denver.

Daniel explained that with so many taller buildings in the immediate neighborhood, but none totally blocking Prism, the design team wanted to create something that would set Prism apart from a background of taller buildings.

“We wanted to make this really special and iconic form that would be unique to anything else downtown,” says Daniel. “So that’s what led to having the glass crinkle wall on 17th.”

“We challenged the architects to come up with something that would be a talking point,” says Culshaw. “We looked at a number of different options and liked the folded wall the best. It’s just a very cool design that reflects the strength of that location.”

Along 17th Street, the nine-story glass curtain wall features five diagonal folds – hence the “crinkle” effect – which create sharply angled planes that reflect the light and provide incredible views from both inside and outside the building.

With design locked down and The Quincy built, ground was broken for Prism on Nov. 16, 2017. For GE Johnson, the tight space, especially with newly opened luxury apartments just feet away, was a welcome challenge.

“We had no real staging or lay down area, but we worked through it and I think it’s something we’re happy to have done to help the client,” said John Webber, senior project manager with GE Johnson. “We kept our construction footprint very tight to the project and only used a small taper area along Curtis Street for deliveries.”

While staging didn’t prove to be difficult, construction of this unique structure was a bit more of a test.

“The structure itself was a bit of a challenge because the interior of the building has very long beam spans,” says Webber. “With only two interior columns, there’s a lot of cantilevered beams to create that large open space. So some of those challenges with the large members and the cantilever beams were to control construction deflections.” 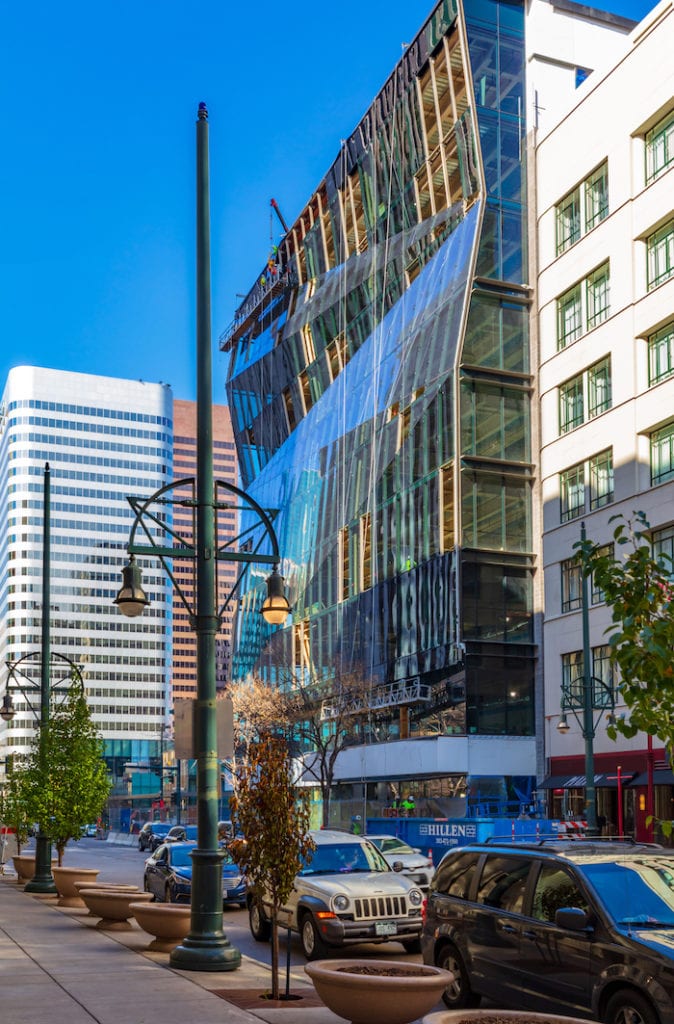 Along 17th Street, the nine-story glass curtain wall features five diagonal folds, which create sharply angled planes that reflect the light and provide incredible views from both inside and outside the building.

Webber added that since the crinkle wall is supported by angled columns, “Those columns created a whole new set of challenges including having to create a unique shoring system to support the construction forces during concrete pours.”

All challenges aside, according to Webber Prism in on budget and on schedule for a Jan. 4 completion date.

Prism’s on-site amenities will include secure indoor bike parking, showers and lockers, 7,000 sf of ground-floor retail and a lobby that will have the feel of a boutique hotel, not an office building. ‘

As construction wraps up, Culshaw says that tenant interest in Prism is high, but he remains tight-lipped about just who will be moving in. He is, however, proud of what they’ve been able to deliver.

“I think (Prism) is a little bit of a jewel box dropped into the very heart of the financial district,” says Culshaw. “It’s kind of right in the crosshairs of the business sector downtown and I like to think we’ve created something that’s pretty cool and will actually help everything around it. There’s hasn’t been anything new go up on 17th street in a long time.”

When I ask Culshaw what he wants someone to feel when they are walking up 17th and see Prism for the first time, he pauses for a second, then says, “I want people to look up and say ‘that’s really cool, nobody’s ever done anything like that.’ And people are saying that already. I’m down there all the time and it’s just amazing how many people stop and look at it for five minutes. It’s iconic architecture and people respond to iconic architecture … they just love it.”

Featured in the December 2018 issue of Building Dialogue.