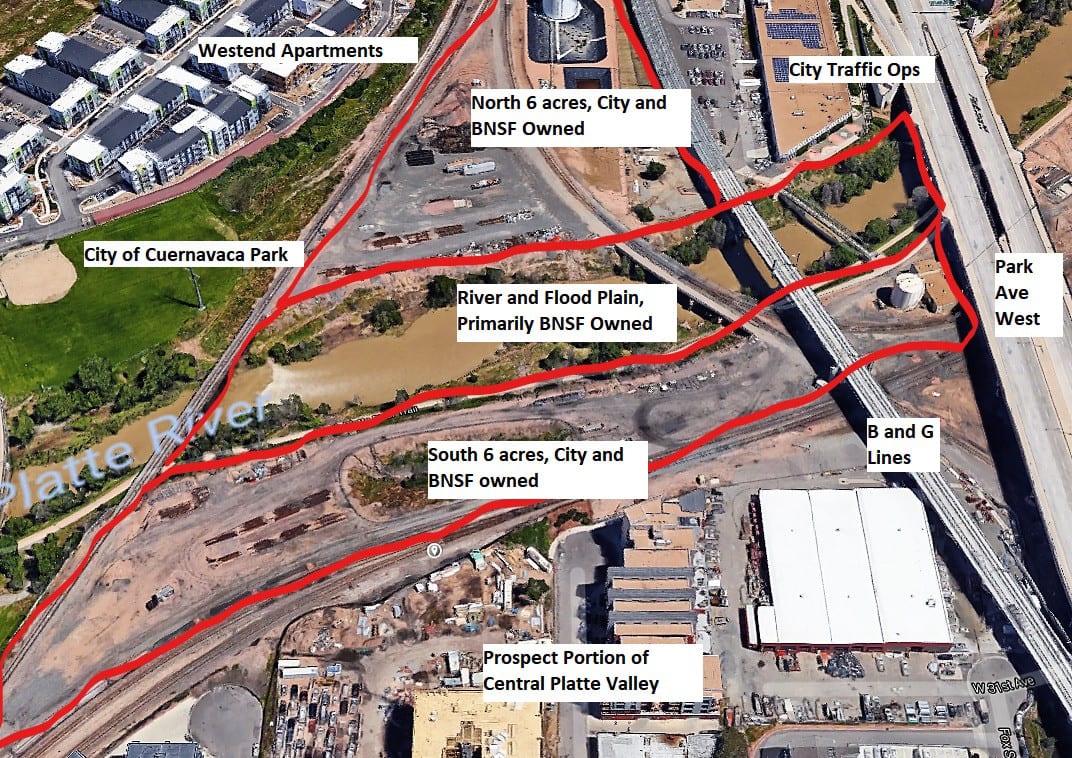 The city of Denver and BNSF control the land that comprises the Rockmount Remainder.

This the third in the series on Denver’s “Whale Sites,” defined as extremely prominent and underdeveloped land parcels whose size and location will define Denver’s future growth and development. Examples include the Burnham Yard, the former Denver Post Printing Site, Elitch Gardens and the Denver Design District. Future pieces also will look at sites in Thornton and Aurora.

The Rockmont Remainder straddles the Platte River between City of Cuernavaca Park and Park Avenue West downtown. The easiest way to

view it is along the South Platte River trail, but you can also scan it from the Prospect portion of downtown’s Central Platte Valley, or peer down to the south and west from the Park Avenue viaduct.

In real estate parlance, this is prime waterfront with a lot of hair. The land is laced with abandoned and operating railroad tracks, with the new G and B light-rail tracks dividing the east and western halves north of the river. Some of the site will have environmental cleanup concerns, assemblage is required, and access is poor. The city and Colorado Department of Transportation use the eastern half of the northern 20-plus acres for police traffic operations, a shooting range and highway road maintenance. The rest of the site is primarily owned by the city and BNSF Railway.

Otherwise, the land appears to have been overlooked since about 1991, when the Central Platte Valley plan flagged it as “general mixed use” and a “flex area,” although Blueprint Denver labeled the land north of the river as an “area of stability” in 2000. Since then, the South Platte has emerged as a valuable real estate amenity and focal point for new development. With the goal of shining a light on neglected prime property, and recognizing a two-sided riverfront opportunity, it’s worth calling it a whale site.

One of the long-term challenges and opportunities in and near downtown Denver is the presence of the railroads. The opportunities have come about via light rail, and the challenges lie in the industrial aspects and economic damage of pass-through train traffic. Beyond the train traffic, it’s difficult to justify storing railroad ties on downtown, river front land valued upward of $150 per square foot. Regardless, any effort to realign tracks, assemble developable sites and capture value in this proximity would be an obvious win for both the railroads and the city.

On the south side of the riverbank, where Huron, Fox and Inca streets dead-end at railroad tracks, the land is zoned for 12 stories (C-MX-12). There are tracks to cross, but about 3 acres of city-owned land fronting the river appear to be used for railroad equipment storage (see aerial image). The Burlington Northern owns another approximate 3 acres, and another half-acre appears to be city right of way. This total 6.5 acres has a small portion along the river designated as a flood hazard, the light-rail line crosses above it, and any development may be able to enjoy parking under the Park Avenue West viaduct. Assuming some cleanup and access via an atgrade rail crossing similar to that at Denargo Street about a quarter mile south, this is prime riverfront land.

And the site improves immeasurably by integrating the north side of the river. On this side of the bank, east of the light-rail line, approximately 13.5 acres are occupied by the city and CDOT, leaving about 6 to 8 acres to the west held mostly by the Burlington Northern. There are some parallels to ownership and environmental cleanup to the south. But the comparison must overcome access and zoning.

The city-owned facilities to the east are served by a winding access drive from Park Avenue. Additional awkwardness can be found west of the site, where Rockmont Drive dead-ends into the Westend Apartments, which are then encircled by park land. This means extending Rockmont Drive to the site would have to cross city park land and an operating railroad line. From the south, a pedestrian bridge, narrow vehicular bridge and rail bridge lead across the Platte. They are being used by pedestrians and the railroad.

The north side retains heavy industrial zoning (I-B) and if reconfigured per this discussion must be rezoned. A unique strip of C-MX-5 land, owned by the Burlington Northern, roughly aligns with both banks of the Platte River from this site through the City of Cuernavaca Park. This strip is of questionable value given its high flood risk.

The potential plan and implementation challenge

Put simply, the developable portion of the site is about 18 to 20 acres total, split in half by a 6-acre stretch of river and floodplain. This leaves about 12 acres that wreaks of an opportunity to create a development centered on the river, with fantastic connections to adjacent land. More importantly, it could serve as a model for enhancing the Platte by cleaning up the campgrounds, antiquated crossings and physical debris clustered in the vicinity. Current Platte River promenade planning extends from Denargo market to 38th Avenue: Adding this stretch of river would complete the connection from downtown to RiNo, and enhance both Commons Park and City of Cuernavaca Park. Ideally, a connection under Interstate 25 connecting the site to the burgeoning Upper Fox and Sunnyside neighborhoods could be thrown into the mix.

Assuming the river and adjacent park are the central recreational opportunities for any development, residential and commercial activity is likely. A high-rise apartment or condominium building incorporating riverside amenities would stand out in the market, as would a corporate office. Assuming public access to the river is prioritized, a deal trading private maintenance obligations with well-designed, accessible, outdoor dining and recreation would be feasible.

A unique aspect of this land is Burlington Northern’s ownership of the river channel and banks, and its C-MX-5 zoning. Secondarily, some portion of the Burlington Northern’s land on the north must be rezoned from heavy industrial. Within any rezoning and land transfers, one could ask if Burlington Northern could trade the bulk of the river channel property as open space but retain air rights, such that both sides of the river could be connected by an aerial bridge or viewing platform. Arguably fanciful, but the bridge could become a major attraction and certainly stand out on the Denver skyline. The shifting northeast-southwest orientation of the river at this point would allow the bridge to be oriented to capture mountain and downtown views.

Key to all of this will be strong connections to the City of Cuernavaca Park and downtown. This site also could be considered an extension of Platte Street via Rockmont Avenue, a supplement to Prospect, or the most southerly portion of RiNo. Adding a connection under I-25 to Sunnyside and the 41st and Fox light-rail station would be a bonus. All these options become apparent due to the current focus of the city and the Greenway Foundation on recovering the South Platte.

Implementing anything like the above would be a challenge. While the Burlington Northern owns a variety of small and large land parcels in and around this area, and one has to wonder if it would gain via reconfiguration and consolidation, railroads are notoriously reticent to transfer their holdings. It appears that a strong negotiator and project champion would probably need to identify and facilitate a series of potential land swaps, cleanup programs, parking allocations, rezones and/ or density transfers in order to set the preliminary stage for development. At a minimum, several city agencies, the Burlington Northern and the Greenway Foundation would need to be involved. Other aspects to consider include access design, river restoration opportunities, tax increment financing, metro district funding and park land creation.