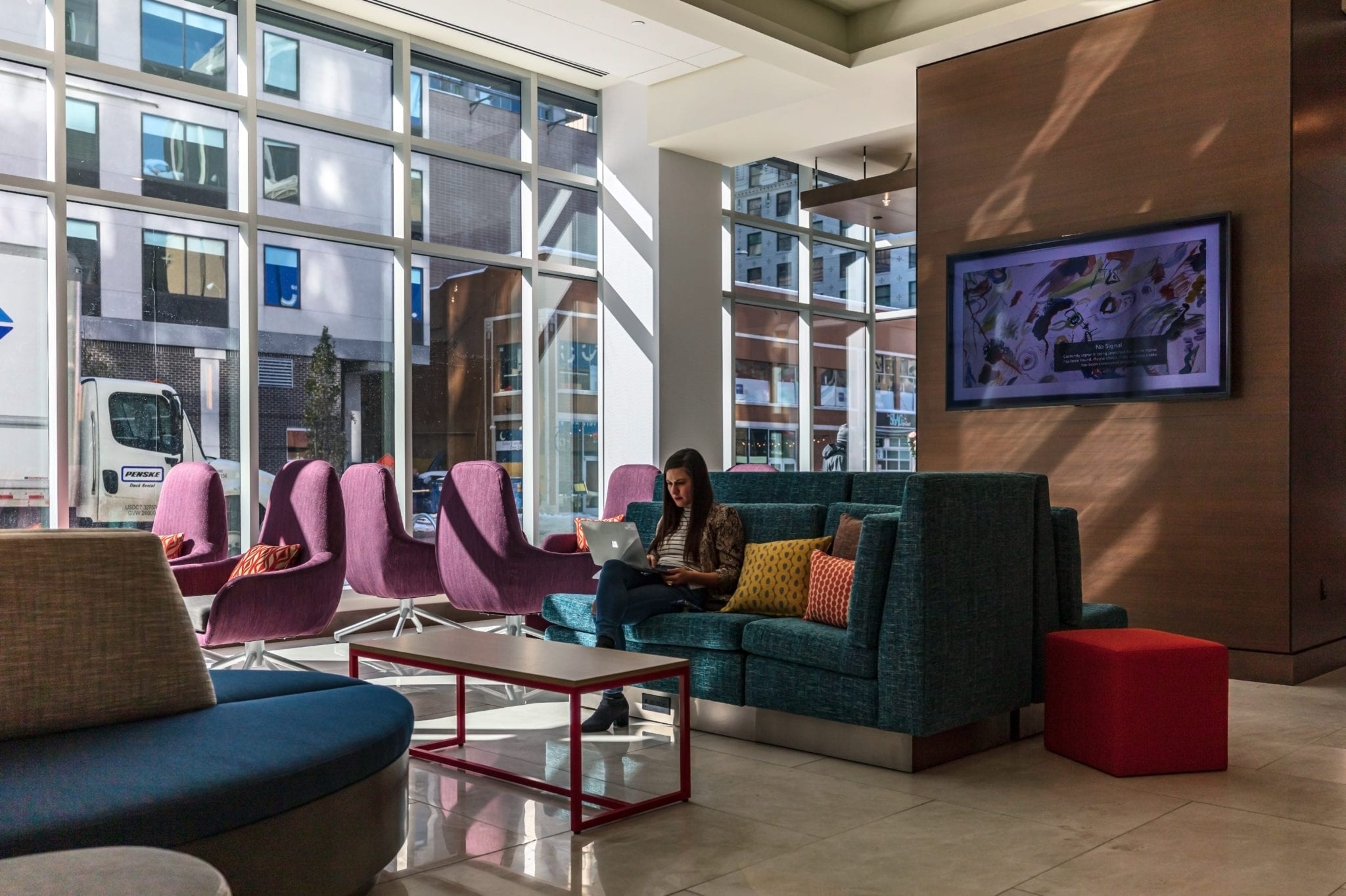 Demand for hotel rooms in downtown Denver in recent years could conservatively be described as ravenous. With Lonely Planet naming Denver one of the top 10 cities to visit in 2020, there are reasons to expect that this trend will continue.

Stonebridge Cos.’ new dual-brand Hilton Hotel helps fill this need with both flash and function. Featuring five parking levels above the ground floor and basement and 382 rooms in all, the 22-story hotel opened ahead of schedule and under budget on Nov. 1.

The project planted a flag for two relatively new Hilton brands – Home2 Suites and Tru – at the enviable intersection of 15th and Stout streets, a block from the Colorado Convention Center. “Hilton determined it has two strong brands that pair well in a dual-brand concept,” says Benton Grismer, The Beck Group’s project architect for the property. “Home2 is an extended-stay offering, while Tru is tailored to the young, hip, trendy guests.” 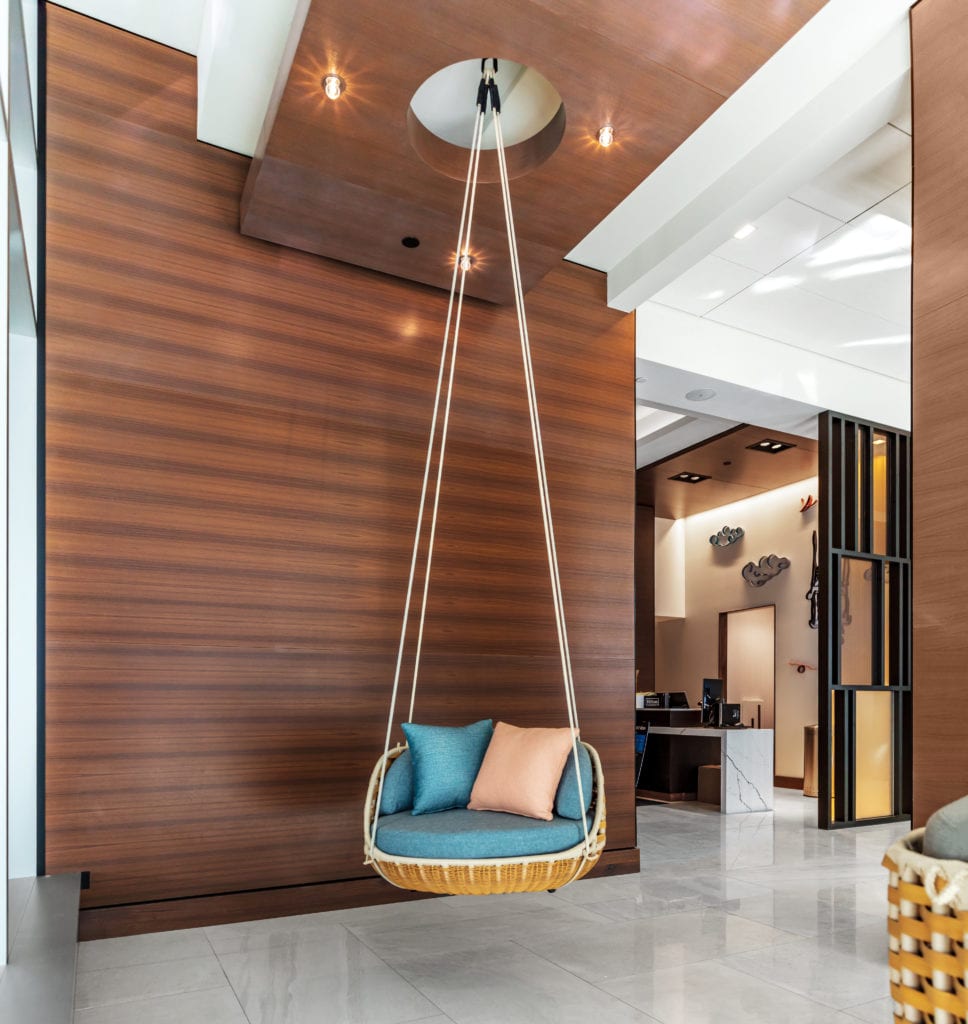 Grismer brought a background in hospitality architecture to The Beck Group when he joined the firm in 2016, and he has worked on Stonebridge projects for a decade. “From Day One, I was focused on continuing work at Beck with Stonebridge Co,” he says.

Julian Nahan, an integrated project leader at The Beck Group, says that dual-brand hotels gain efficiencies by sharing functionality between the two hotels. “One of the appeals of a dual-brand is you have a single lobby, bar and support staff, all while marketing two different room types,” he says.

The interiors of the Home2 wings are stylistically differentiated from that of Tru. The former is more businesslike, with larger rooms, whereas the Tru side is marked by vibrant and young-at-heart styling. But shared facilities like the bar and breakfast area meld elements from both brands. “Figuring out how to bring both brands and both offerings together was key to making the design a success,” says Grismer.

David Morris, design principal with The Beck Group, says the project was about taking the existing prototype for a dual-branded Hilton and reimagining it as a high-rise. “All the precedents we had to work with were suburban, three stories, stick-built,” he explains. “To take that model and apply it to an urban setting was a unique challenge.”

For the parking levels, our goal was making infrastructure that didn’t look like infrastructure. “We paid significant attention to the lower 80 feet of the garage,” says Morris. “As a result, our design solution is both functional and elegant.” 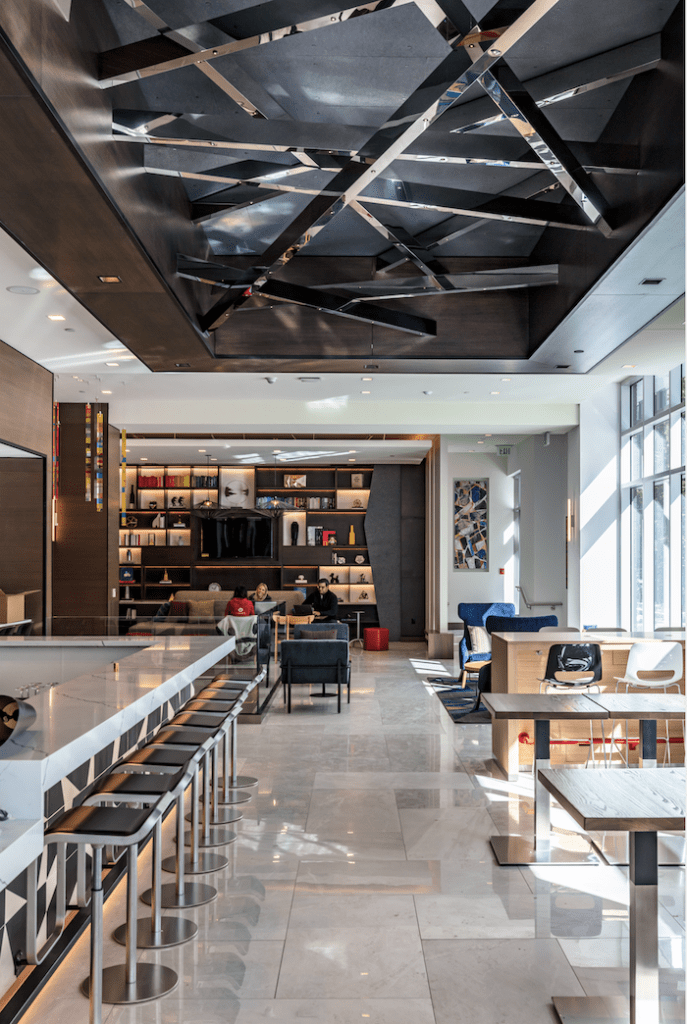 The palette of materials allowed for a distinctive look at a very competitive price. “We did exhaustive studies of different panel options,” says Morris. “We landed on a premanufactured panelized system.”

Littleton-based South Valley Prefab won the job for its ability to hit both budget and aesthetic criteria. “They were manufactured locally, trucked up here and put in place as the concrete was going up,” says Morris.

“Everybody talks about cost and speed to market when you go with a panelized system, but we were intrigued by the quality and the tighter tolerances when making panels in a factory and shipping to the site,” continues Morris. “We talk about a plug-and-play approach, but it’s more sophisticated than that.”

Brian Rohnke, president of South Valley Prefab, says that the company has supplied in other hotel projects in Denver, including Le Méridien/AC Hotel and The Jacquard for Stonebridge.

“We’re market-relevant when compared to traditional construction methods,” says Rohnke. “We’re trying to meet cost, quality and schedule, which is unheard of in this market. Usually, you get two out of three. This is as close to hitting all three buckets as I’ve seen.”

Nahan says that the line item in the budget for the panelized was “effectively the same” as traditional screening methods, but scaffolding wasn’t required, making for smoother logistics.

The masonry-inspired look of the interlocking panels has curb appeal. “Studying those joints and reveals was important to the design of the building,” says Grismer. “Doing that disguises how the panels come together.”

Morris touts the result as raising the bar for projects with South Valley Prefab’s panels. “Honestly, this is 2.0,” he says.

Rohnke laughs and adds, “To us, it’s version 8.0. There’s a huge entrepreneurial spirit within our company. The fabrication of these panels involves automated machinery, which is unheard of.”

After ground was broken on the hotel in late 2017, the building topped out in late 2018 and “skinned very shortly after that,” says Grismer. Project completion was about a month ahead of schedule.

That’s exactly why Stonebridge picked a design-build firm on the project: speed to market. “It really comes down to vertical transportation of people and materials,” says Nahan of keeping a high-rise timeline on track.

With a hotel, there’s another critical aspect, he adds: “Understanding the detail in the hotel rooms and making sure we got it right, because we had to do it 382 times.”