The Henry: Modern Sophistication with a Nod to Denver’s Prairie Style Roots 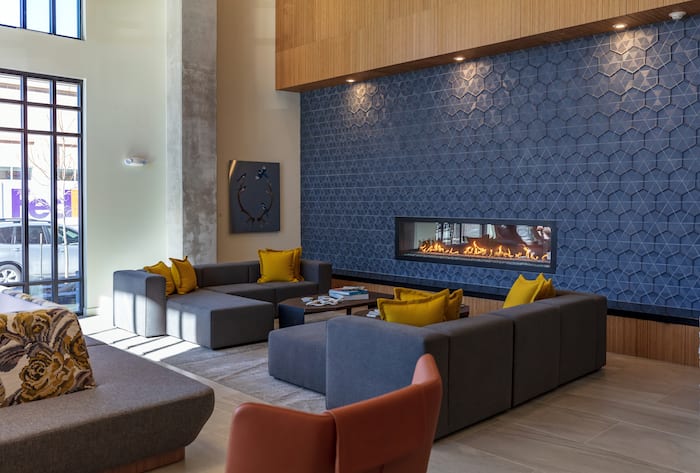 When you walk into the main lobby of The Henry, it feels like you’ve entered a boutique hotel. Courtesy Michelle Meunier Photography

“Art, after all, is man’s expression of joy in his work.” – Henry Read, artist and co-founder of the Denver Artists’ Club in 1898

By 1900, the Arts and Crafts movement had moved across the prairie and taken hold along Colorado’s Front Range. The handiwork of Denver-area designers, craftsmen and craftswomen began to flourish and the movement’s influence was undeniable with the arrival of a new Denver suburb, Washington Park.

The brick bungalows that sprouted up on the streets surrounding Reinhard Schuetze’s new park showcased the Arts and Crafts style and its accompanying Prairie School of architecture, with their hipped roofs, broad overhanging eaves, horizontal lines and solid construction.

Skip ahead a century plus and some of those same design principals are enjoying a modern reboot at The Henry Apartments in Platt Park.

Named after famed Denver artist Henry Read (1851-1935), The Henry is a nod to the roots of the Washington Park and Platt Park neighborhoods while delivering all of the sophisticated features and amenities that today’s well-heeled apartment hunter may demand.

The Henry sits on a 4-acre, triangle-shaped parcel in the Gates redevelopment area framed by East Mississippi, South Sherman and the Valley Highway/light rail lines. After some careful study, Carmel Partners came on board as owner, developer and contractor. 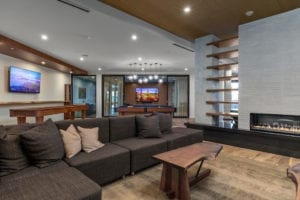 The Clubhouse on the third floor offers a variety of spaces for entertaining friends or a fun night at home. Courtesy Michelle Meunier Photography

For architecture services pre- and post-purchase, Carmel reached out to Kephart, a Denver-based residential architecture and land planning design firm that’s been perfecting their urban multifamily chops around Denver (Denizen, Alexan Uptown, Kent Place, Veranda Highpointe) and around the U.S.

Rounding out the team was Portland-based Vida Design, an interior design firm that has been wowing clients with its magical ability to turn ordinary multifamily or retail spaces into models of hipness. Vida had previously worked with Carmel on Union Denver and Mile House and had teamed up with Kephart on Denizen, so past successes seemed to portend good things to come for The Henry.

What Do You Build on a Triangle?

According to Bobby Long, Kephart principal and director of design, the triangular shape of the lot was just one of the issues the team would have to address in the design phase.

“Obviously the challenges with making sure we’re able to get a setback along the highway and the adjacency to the light rail line were an issue,” says Long. “So there’s the challenge in the way that things are located on the site and that led us to something that’s a little different for a lot of these podium buildings. Most of them have multiple smaller courtyards – and we wanted to go that route as well – but this kind of challenge with the site geometry led us to create one large courtyard as opposed to two or three small ones, which might be a more typical approach to a project this size.” 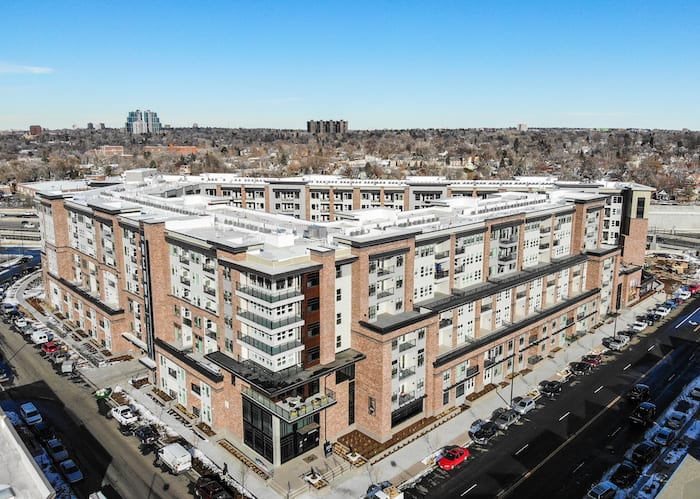 But site geometry issues weren’t the only problems that the team was facing.

“We had to meet the design district guidelines as well as the city of Denver planning guidelines,” says Kephart Associate Principal Steve

Martinez. “So it was just that much more complex with view planes and step backs and everything else.” Martinez explained that one of the design district requirements for a building in excess of 55 feet resulted in a third-floor step back of 10 feet, giving it a sort of “wedding cake look.” In addition, a certain percentage of the building that had to be within 10 to 20 feet of the property line to ensure a street presence.

Challenges aside, from the early design phases, Carmel, Kephart and Vida all worked together to form a unified vision.

“Carmel is great at being very inclusive and we have a lot of really great discussions about what they’re trying to get out of this site, what things we see,” says Long. “(Carmel) are invested in those dialogues and it’s like that all the way through the process, the basic building programming, what it’s going to look like, what the branding is – every step is a collaboration.”

When it came to the look of The Henry, Martinez, Long and Vida Founder and Principal Rachel Sowieja all agreed that the location really drove the look and feel. The team knew the industrial roots of the location and the Arts and Crafts influence of Platt Park and Washington Park were elements they had to embrace.

“It was a team effort and we continued to dive in with that visioning, that materiality and really start to find the kind of character that makes sense for the site,” says Long. “It had to make sense for the history, for the location and we really honed in from there with what the building would look like.”

Sowieja added that given the namesake of the project and the artistic roots of the area, “It was very important to Carmel that we bring the arts into this project, so that element was factored in from the very beginning.”

Construction on The Henry began at the end of 2016 and according to leasing agent, Derek Kern, Phase 1 tenancy is “about 80 percent full.” Tenants began moving into Phase 2 in February and Phase 3 is slated for final completion by the end of March.

And whether you’re driving on Interstate 25 or coming down Logan, you can’t miss its presence. The vision of Kephart, Carmel and Vida can be seen in the horizontal lines and oversized two-tone brown and tan brick that’s clearly a nod to the area’s early roots.

“The brick hearkens back to this area around the turn of the century,” says Long. “There’s a hint of craftsman, a hint of Prairie style in the massing that we use in the buildings which ties to that time period while playing off the same influences that the bungalows were initially designed to but stretched to a larger scale.”

Windows are an important characteristic of the prairie school aesthetic and The Henry communicates that on a grander scale. Oversize windows give the apartments an open, airy feel on the inside while the framing on the exterior offers a modern twist on the Arts and Crafts style. Kephart’s sense of proportion, use of fenestration and broad overhangs that become balconies, all of it creates a sophisticated, modern Prairie-style look. It’s new, it’s timeless and it looks more like a resort than an apartment complex.

According to Sowieja, the idea for the interior was to embrace the aspects of the prairie-style from the exterior and “put a modern spin on that.”

“So, I think that was something we accomplished,” says Sowieja. “But then we also wanted a curated overlay, so that is accomplished primarily with the furniture and the artwork. I think it’s just a really nice, versatile, warm, comforting and also sophisticated space to live in.”

To Sowieja’s point, when you walk into the main lobby of The Henry, it feels like you’ve entered a boutique hotel. The Prairie style is present with built-ins and ample amounts of teak, but the light fixtures and furniture give it a modern flair.

Adding to the curated feel, original artwork by Colorado artists are hung throughout the public spaces, but placed with enough room so that the art makes a strong visual statement.

“I think that sometimes art is lost when too many other patterns and things are going on around it so you don’t get to appreciate the piece,” says Sowieja. “There has to be a careful balance that you study and make sure that you plan for the art, too, at the same time you’re thinking about the interior.” 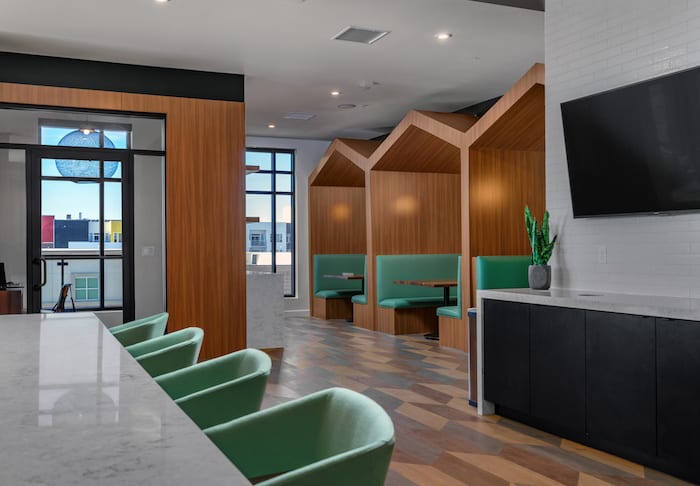 The Co-Working Innovation Lounge on the third floor provides great views of the mountains and a dynamic work space. Courtesy Michelle Meunier Photography

Ready to sign a lease? Well, The Henry has 403 one- and two-bedroom apartments that range from 594 to 1,490 sf and each one is appointed with luxe finishes like designer fixtures, stainless steel appliances, quartz countertops, wine fridges and Nest learning thermostats.

Inspired, thoughtful architecture, luxury finishes and a jaw-dropping lineup of amenities make The Henry a stylish and welcome addition to Denver.

And with enough original paintings by local artists to fill a gallery gracing the walls, you have to think that Henry Read would approve.