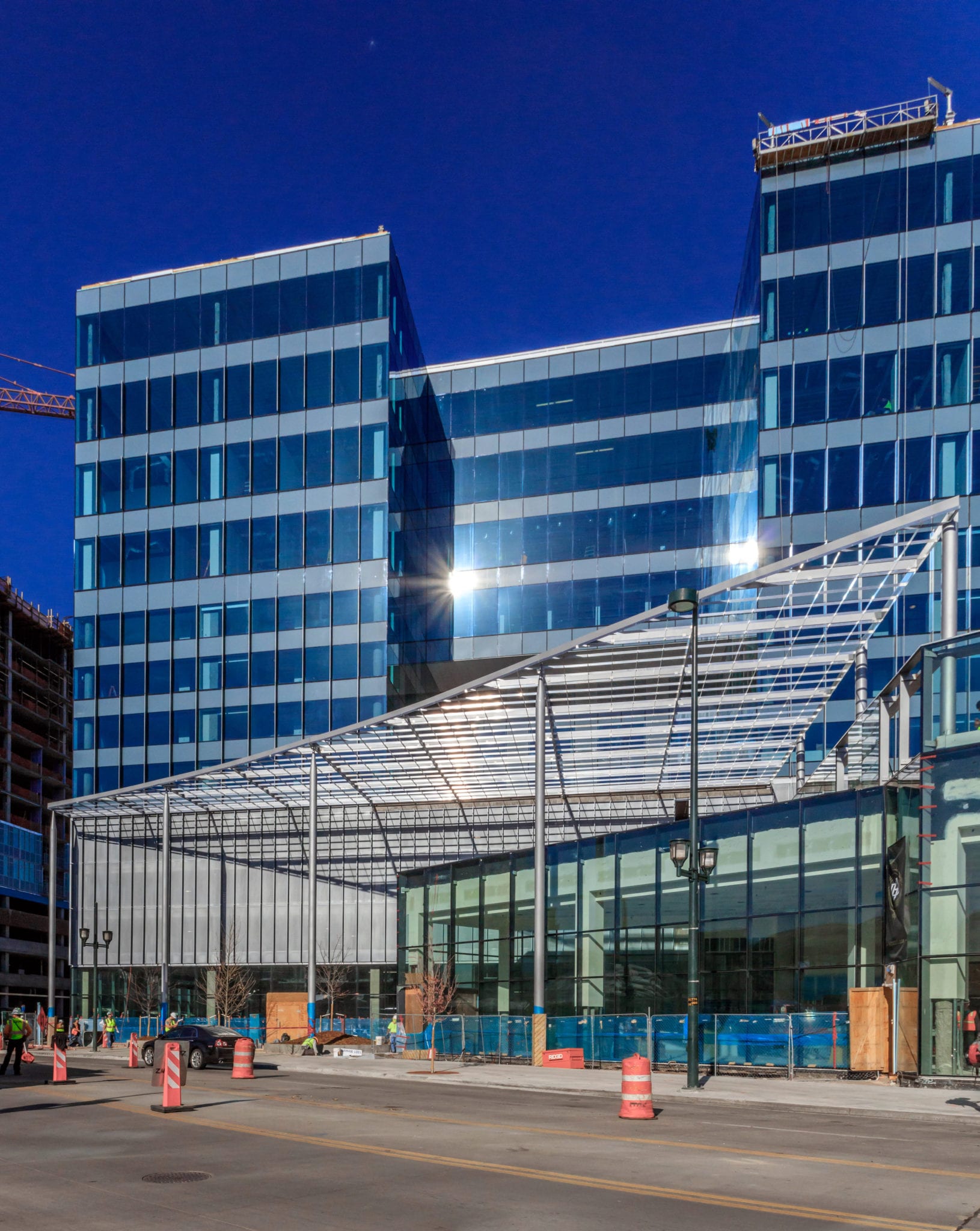 It sure didn’t start out that way.

A simple and elegant trellis mirrors
the pattern of the glass panels
of Union Tower West. Courtesy John Portman & Associates

1801 Wewatta Street was a dusty lot with the weird shape that languished on the wrong side of the tracks from Union Station.

It was also one of the last parcels in a white-hot neighborhood where anything of substance could be developed.

Now it’s Union Tower West, a visually stunning 12-story, 312,000-square-foot, mixed-use gem at 18th and Wewatta. Slated for completion in mid-January, it will contain three floors of office space, the upscale Hotel Indigo on three floors and three floors of parking with plenty of restaurant and retail space to keep the scene buzzing. It hits all the touch points of connectivity, walkability and urbanism for Denver’s newest neighborhood, The Commons.

But, in the beginning, the vision wasn’t so rosy.

“We saw this project as an opportunity, but we had to figure out how we could make something of the site,” says Thomas Dooley, project manager for Greeley-based Hensel Phelps.

Construction continues on the ground
floor of Union Tower West, which will
feature space divided into independent
retail and restaurant outlets, the lobby
for Hotel Indigo and a common area
called “The Great Hall.” Courtesy Michelle Meunier Photography

Hensel Phelps secured the site along with Atlanta-based developer Portman Holdings. They partnered to bring in John Portman & Associates, who in turn tapped Beckman as the architect to make something spectacular out of the ragged parcel.

John Portman & Associates’ portfolio is as big as some of the 4 million-square-foot office towers they design around the globe. But according to Beckman, Union Tower West is anything but small.

“To me, this is not a little project, this is a big project with a big urban impact, with a big architectural impact, and it deserves all or more of the attention of any large projects,” says Beckman. “We have a very difficult site, with unusual geometry. It’s triangular on one side, it’s got a curve on one side and it’s got two flat edges. It’s a very difficult site but a site that prompted creativity.”

Faced with the challenge of combining hotel, office space, retail and parking, Beckman sat down and began to sketch. And everything pretty much fell into place. Or, stacked into place would be more accurate.

“I tell you I did these sketches at about 9 o’clock one night because it had been bothering me for three days,” says Beckman. “Then it hit me – let’s take what is there and figure out the best way to put a hotel on it, the best way to get the office floor plates this size and, well, it all came together.

“You just take the perfect diagram for each component and start to weld them together into one. All the time dealing with this irregular site and the desire to work with the curves of Wewatta and suddenly they begin to make sense together. I sat at the desk until midnight or something because it all just started to flow.”

The solution was to stack the building’s components vertically. So, the ground floor of Union Tower West is office, retail, the Hotel Indigo lobby, restaurant and bar. Above that will be three floors of parking – which will include bicycle parking and electric-car charging stations. Floors 5 through 8 are Hotel Indigo rooms and the top three floors are office floors with incredible views. With a brilliant glass façade, broken up massing, green roofs, silver panels and clean lines, Union Tower West has a decidedly Portman look to it, but the draw for Beckman was pure Denver.

“We don’t take every project that gets presented to us,” says Beckman. “But I was drawn here by the city and the community. (Denver) is just one of these places that is uber cool, that’s what I like about it.”

Once the concept was nailed down, John Portman & Associates, Portman Holdings, Phelps Development and Hensel Phelps went through the usual iterations of programming and pro forma study. The team had to deal with zonal limitations for building height, zonal limitations for type of project, all the while balancing an interest in creating a Portman signature building, and, of course, keeping a close eye on the budget.

Oh, and the odd shaped lot? Now we can call it inspirational.

“Wewatta does this little S-curve, so you get this little shape like a piano,” says Beckman. “It’s got the curve of a grand piano and by taking that and repeating the curve with this simple trellis it gives an enclosure to the space and it gives the space an identity, it’s not just left over space.”

Beckman said that the curving trellis acts as cover for patrons of the hotel’s restaurant and bar, while at the same time acting as a draw to pedestrian traffic.

According to Travis Garland, director of leasing for Portman Holdings, the site and the chance to be a connector to Union Station attracted them from the start.

“We loved our site from the moment we bought it,” Garland says. “We knew we had a special location – connected to Union Station with incredible views. The public use of the hotel, restaurant and retail adds to the incredible retail base and walk-ability of the neighborhood.”

And once construction began, the complexities of building on a constrained urban site had its own set of challenges. Not the least of which was the 141-year old next-door neighbor: Xcel Energy’s steam plant.

However, according to Dooley, communication is the best tool in his box when dealing with the tight spaces of urban infill.

“In any downtown environment, it’s working with the neighbors to make sure that you’re communicating and you’re coordinating to keep construction progressing,” says Dooley. “In some ways that’s our biggest challenge, and in some ways that becomes one of our bigger successes because you don’t have an option to cowboy it and do things your own way. You have to work with the city, you have to work with the neighbors, you have to work with neighboring contractors and it becomes a normal course of business to detail every delivery, every construction paving plan and man power with adjacent properties and contractors in the city and of course we want to keep Excel happy.”

And while communication is valuable, one factor is always on Dooley’s mind.

“Above all else, though, safety is paramount,” adds Dooley. “We always have to make sure that we’re keeping the public and any adjoining neighbors safe from any potential incidents.

“It comes down to working with the city and making sure that we’ve got plans for lane and sidewalk closures. Anything that’s impactful to pedestrian or vehicular access we try to do on the weekends. Our superintendents attended biweekly meetings of all the contractors and the planning portion of this part of town to discuss all the lane closures, all the sidewalk closures, any major activities, any major deliveries from us and from any of the adjoining contractors so everybody is aware and can coordinate accordingly.”

According to Dooley, thanks to good communication, flexible coordination and diligent safety awareness, throughout the project they have been “on budget and right on schedule.”

As it builds toward completion, Union Tower West’s beautiful Viracon glass façade and silver translucent metal parking garage screening are striking additions to LoDo and tenancy is moving along smoothly.

Hotel Indigo, part of the InterContinental Hotel Group, is a boutique hotel that touts a “retail-inspired design experience” with murals on guest room walls and public spaces that transform “seasonally through changing aromas, music and artwork.”

Law firms have been quick to move on most of the office space. Husch Blackwell, with offices in 16-cities around the U.S., will lease 36,272 square feet of office space – or a floor and a half – while Denver and Chicago-based Bartlit, Beck, Herman, Palenchar & Scott has signed on for a floor.

Garland could not name the restaurant tenant, but did confirm that they have a restaurant concept on board and will disclose their identity soon.

And while all that glass skin is visually stunning to look at, it’s also a reason while Union Tower West will be a LEED-certified Silver or Gold building. According to Dooley and Beckman, sustainability was a focus from day one.

“For us, it’s not a matter of saying, ‘Denver likes brick and they like this so let’s put all that stuff together and make a building out of it,’ ” Beckman says as he points toward Wynkoop Street. “No, what we look at is how can we take the technology of our time because the technology of our time is what’s key. It’s key for the sustainability aspects of the project, it’s key for the aesthetic of what we do. It’s the key for doing more with less … one of the best things you can do for sustainability is use less stuff. Use less steel, use less concrete, use less glass, use less drywall because all of those things come from our natural resources.”

Dooley adds, “As of the last 10 years, sustainability has certainly become a leading discussion in the design of any building. Owners and tenants are getting somewhat smarter in looking at the metrics of what it means. When you’re looking at the leasing aspect of it, LEED Silver or Gold have become buzzwords and people know that this is a high-performance building.”

Beckman and Dooley both say the key in sustainability for Union Tower West was built around the “less is more” approach.

“We call it sensible sustainability,” says Beckman. “That means we’re not jumping through a bunch of hoops and spending a lot of money to achieve a goal, but rather we’re looking at things like how I site the building, what sides do I open up, what sides do I close down. These types of decisions early on make it easier.”

“Obviously, you take a look at what the building demands are early in the project,” Dooley says. “You look at the mechanical systems, electrical system and the skin. Portman chose a very high-performing glass skin and you start the mechanical and electrical design accordingly.”

Beckman ponders the sustainability question a bit more and looks over toward his creation. “It comes down to this: You find an inherent balance in comfort and energy and achieve that balance through some pretty thoughtful ways that makes it all make sense.”

With completion just weeks away, optimism for Union Tower West and the likelihood of more Denver projects with the Portman/Hensel Phelps team seem likely.

“The Portman relationship is one we want to continue,” says Dooley. “They’ve been a great partner on this project and it’s certainly a relationship that we want to foster and continue. They’re a powerhouse in the development world and have the architectural influence, as well. They’re situated quite well to work with a partner like (Hensel Phelps).”

Garland and Beckman shared Dooley’s desire to work together in the future.

“Nothing we can announce right now in Denver, but we hope to have future projects,” says Garland. “We are big fans of the city and have looked at several other opportunities.”

Featured in the December 2016 issue of Building Dialogue