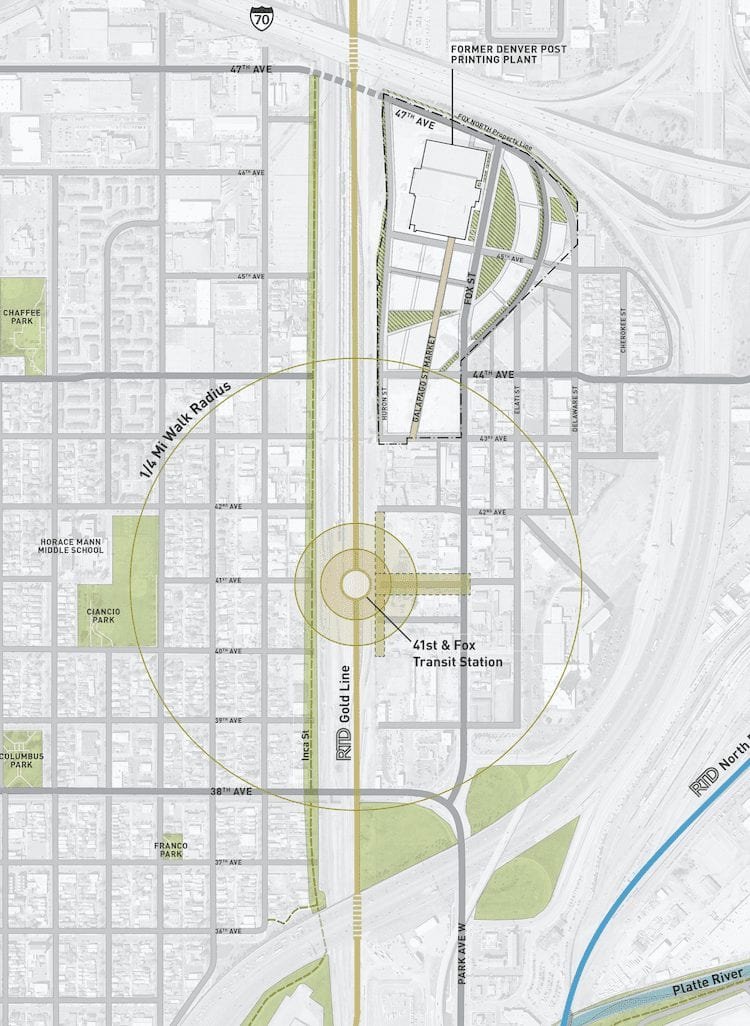 You can find upper Fox Street after crossing Interstate 25 on the Park Avenue West viaduct traveling north, or take the 38th Avenue exit from southbound I-25. There also is a “backdoor” access via 45th Avenue driving west out of Globeville. You also can walk east across a 450-footong pedestrian bridge from the Sunnyside neighborhood. And, in 2018, you should be able to take the Gold Line five minutes out of Union Station to the first stop.

These options route you to a semi-industrial area wedged between extensive railroad tracks and I-25, with Interstate 70 visible to the north. Besides the gate and fence securing the 41-acre former Denver Post printing plant, the real find is the 41st and Fox light-rail stop with a completed parking lot. Overall, there exists 101 acres of numerous redevelopment sites served by one train stop, with a seven-minute drive time to downtown. This is truly a whale site poised for growth.

The site’s history is most recently tied to the Denver Post print production site, whose 322,000-square-foot building ceased operations in 2008. Prior to that, the Denver Brick factory around 44th and Fox dominated the area. It employed over 200 workers in 1927, producing pipes, bricks and clay conduit.

The printing plant site was originally branded as “25-70” in 2008 due to its close proximity to the freeway interchange. The moniker did not capture the lack of on- and off-ramps, but this probably reflected Blueprint Denver’s industrial designation for the area. The city’s 2009 41st and Fox Station Area Plan called for two- to eight-story zoning with a mix of residential and commercial uses, and 500 to 1,000 spaces of structured parking in and around the then proposed train station. The plan also contemplated strengthened connections west to Sunnyside and east to the Regency student housing. Outside the station area, two- to 20-story residential development was foreseen.

Since the recession the Denver Post printing plant site has gone through several entitlement explorations. It now is in the process of completing approvals for eight- to 12-story mixed-use zoning, which includes an exciting development plan that recently garnered some attention as a possible Amazon HQ2 site. In this context neighboring properties got into the act and demonstrated a willingness to facilitate a potential corporate campus extending over the adjacent sites inclusive of the train station.

Upper Fox’s current development pattern is in some ways similar to the River North neighborhood of 10 years ago, with a few large parcels beyond the printing plant and very clear edges. Some residential uses are mixed in, mostly on the northeast, but the stage is set for a transition to mixed-use properties centered on the train station.

The overall Fox North area is well-defined by railroad tracks, 38th Avenue, I-70 and I-25. The current owners of the northern 41 acres (Woodspear Properties and Ascendant Development) have worked with Tryba Architects to create a remarkable plan that leverages the site’s relative isolation with its high visibility.

Their development plan integrates industrial, office, “maker” opportunities in and around the former printing plant, mid- and high-rise residential opportunities with a new park east of the plant, and a highly workable integration of mixed-use, apartments and work/live space on the southern, “brickyard” portion. The site also connects to the 41st and Fox Gold Line station via a reoriented Galapago Street. On the north side, abutting I-70, an extension of 47th Avenue over the railroad tracks is noted as a future design option. This would connect to the I-70/ Pecos interchange.

South and east of Woodspear/Ascendant’s site is a complex mix of ownership and land parcels. Transitional uses include light-industrial, autobody shops, doggie day care, a dispensary, vacant lots and single-family residential. Student housing and apartments along I-25 are likely to remain economically viable. Significant portions of the remaining area pose an assembly challenge given the numerous small parcels, although exceptions include the 6-acre triangular parcel north of 44th between Delaware and Fox and several sites controlled by savvy real estate investors.

Absent a deep-pocketed and ambitious investor, the southern portion will be developed organically over time. While there has been some interest in developing a cohesive, planned approach, the reality is that any master plan or evolution of the 2009 station area plan has never moved beyond preliminary conversations. Luckily the majority of the property is well served by a respectable street network, but that same network will require significant curb, gutter, drainage and subsurface utility upgrades. New connections across the tracks and 38th Avenue could be explored, possibly via a new 47th Avenue viaduct over the tracks, and a subsurface pedestrian/bike or street connection under 38th Avenue to downtown.

With the exception of the former Denver Post printing plant, the area lacks significant buildings that could be rehabbed or adapted. Of course, small-scale development could occur where the right zoning is in place. The present zoning is an incongruent mix of eight-, 12- and 20-story commercial zoning mixed with heavy industrial. Oddly, heavy industrial zoning predominates on both sides of Fox Street closest to the train station.

Between its proximity to downtown and the Gold Line light-rail station, continuing redevelopment of Upper Fox is a given. The question is whether redevelopment will take place first in close proximity to the train station or whether the Woodspear/Ascendant 41-acre master plan on the northern edge leads the way.

Given the lack of direct highway access and limited arterial street connections, you could argue that the light-rail station becomes a natural focal point for the area. However, heavy industrial zoning and RTD parking lots limit options. As long as surface parking lots dominate the landscape, it’s reasonable to think that station area redevelopment will proceed gradually.

In contrast, the northern 41-acre site is now poised for growth. Its plan not only defines an amazing opportunity for the land but also will effectively integrate and promote development at its edges. What this plan now needs is one strong tenant – others will follow.

The specialized location of Upper Fox creates an opportunity to create another unique pocket in Denver. The Woodspear/Ascendant plan for development sets the stage for a place we can all be proud of and will enable this section of the city to redevelop with its own character. The challenge will lie in the southern portion. Like building furniture from Ikea, some assemblage and foresight is required.