Whale Sites: Ballpark district is sitting on a gold mine 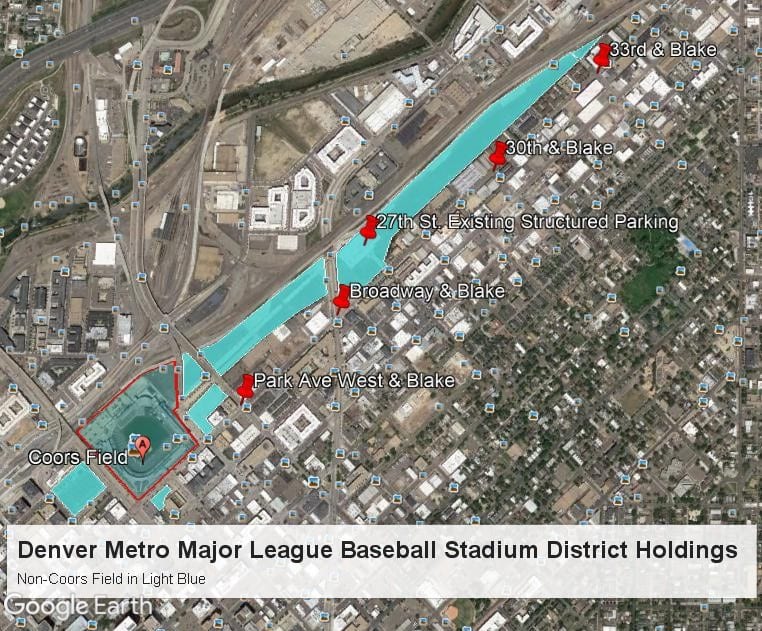 A Google Earth image of the stadium district’s properties.

This the sixth in the series on Denver’s “Whale Sites,” defined as extremely prominent and underdeveloped land parcels whose size and location will define Denver’s future growth and development. Examples include the Burnham Yard, Upper Fox, Park Hill Golf Course, Elitch Gardens, and the Denver Design District. 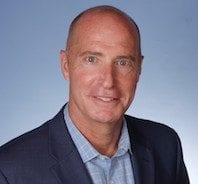 Riding the A-train between Union Station and the 38th and Blake stations is revealing. Excluding Coors Field, vacant and underdeveloped warehouse land straddle the tracks, including about 33 acres on the east side containing nothing but parking for Coors Field. Another 3.5 acres or so of parking exists across 22nd Street from the ballpark.

All that asphalt is jarring, considering the prevalence of structured parking, increased ride hailing, and the development pressure in RiNo and the Ballpark neighborhood. It then becomes obvious that the Denver Metropolitan Major League Baseball Stadium District is sitting on a gold mine. Outdated zoning, lack of contiguity, poor access and some odd configurations suggest the land itself cannot truly be considered one site. But because it is under the control of one public entity, and for the purposes of this series of articles, we are going to call it a Whale Site.

Background & existing conditions
The stadium, or ballpark district, is a legal creature of the State of Colorado. It gained control of the land in the early 1990s as part of its mission to construct and maintain Coors Field. The ballpark’s creation is an amazing story in of itself, not least because its 1995 opening marked the development of the first baseball-only stadium since 1962.

A hotel and baseball-themed amusements including a hall of fame are planned for the West Lot, which is surrounded by Wazee, Wynkoop, 19th, and 20th Streets. Revenues from this development are proposed to support long-term maintenance of the ballpark – a great plan as the ballpark approaches 30-plus years in age and gets more love every season. The need to generate revenues from this land and ensure ballpark accessibility is paramount to the speculative discussion that follows.

Outside of the Wazee block, the stadium itself and its accessible parking area, there exist about 40 acres of land mostly used for parking. Each parcel is listed below. Any development will have to overcome the restrictions of its obviously outdated, industrial zoning. I-B zoning, or general industrial as it’s known, covers virtually all of the land contemplated herein. Coors Field itself, and its northwest corner parking lot, is zoned I-A, or light industrial.

Both of these categories have been traditionally used for railyards, manufacturing, parking cars and equipment, and marijuana grow houses. The city’s zoning code notes that, “No new residential uses may be established in the I-B zone district in order to promote and continue a stable employment base for the city.” In addition, the floor area of any building in the I-A and I-B zones cannot exceed two times the size of the development parcel (e.g., 2:1 FAR). Fortunately the city contemplates changes to the zoning within its 2011 Northeast Downtown Neighborhoods Plan.

Big-scale ideas and needs
The initial work has to be an evaluation of the ballpark’s long- and short-term parking needs. How exactly do fans get to Rockies games, and how has it changed over time? Ideally the ballpark authority has been tracking parking demand trends. The largest parcels north of Broadway have been used for special events, such as the Velorama festival in August 2017.

The best way to consider options is to separate the land, looking first at the narrow parcels abutting the railroad tracks to the north side of Broadway, followed by the large lots across 22nd Street from the ballpark located south of Broadway.

The elongated nature of the land north of Broadway, and its lack of a street network, probably dictates a piecemeal approach to development. However, development on the almost seven city blocks of land along the tracks is likely to face some neighborhood opposition. Residents may believe the parking lots are permanent fixtures, and that their mountain views should be preserved.

Assuming that, a thoughtful plan would reach out to the neighbors and could insert a street system and break up building massing. The land is wide enough to construct a street and pedestrian path network, and planning for a mix of lower, two- to four-story buildings with some higher building heights appears possible. Any development could also improve connections across abutting railroad tracks and better align the heart of RiNo South with RiNo North. The city recently identified a new crossing at 31st Street as worthy of additional planning.

Luckily the land south of Broadway is much more commercial in character and may be ideal for greater structured parking and more intense development. Conceptwise, the ballpark authority and others are scrutinizing entertainment-themed developments in other cities, such as the Battery abutting SunTrust Park in Atlanta, The Star around Cowboys Stadium, L.A. Live in downtown Los Angeles, and plans for a redesigned Wrigleyville on Chicago’s north side. Think eat, play, stay. The challenge in these environments is visitation outside of the 81 annual home dates, but the symbiotic relationship between attendance, revenue and recreational activity cannot be overlooked.

Smaller-scale development opportunities
The ballpark has three abutting sides that could be taken on incrementally. The West Lot plan is a wise first effort given its LoDo proximity and value. The east side running along 21st from Blake (aka Rockies Road) faces real challenges: awkward PUD zoning hamstrings development on the vacant lot fronting Blake; an abutting, enclosed Xcel substation decimates the remainder of the block; and, a vacuous Public Storage building controls the north side of 21st. These three eyesores dampen what should be grand portal to the ballpark. Overcoming them will be a tall order.

In contrast, the north side of the park contains the bulk of the developable vacant land around the ballpark and offers an exciting opportunity. Coordinating its development character with that found along Blake from 22nd to 25th is an option but may not be easy due to an expectation for increased heights. The land is just outside of the ballpark historic district and any rezoning may stipulate some type of design review.

The primary challenges in this proximity consist of 1. maintaining the right amount of close-in parking; 2. capturing outstanding residential opportunities, along with potential hotels and restaurants; and 3. achieving some level of compatibility with the warehouse character of the ballpark district. The block of Wazee Street between 22nd and Park Avenue West could serve as the spine to any development plan while continuing to serve as a direct connection to I-25. Interestingly, the ballpark enjoys a view preservation corridor to the northwest from home plate, restricting building heights up to the edge of I-25. Well-positioned high-rise development could have outstanding western views.

Conclusion
Parking demand is not going away, but the trend toward creating dynamic entertainment districts around ballparks is growing. The Rockies, the city and the ballpark district have an outstanding opportunity, and resource, within this 30 to 40 acres of land. As an example, picture driving up to the ballpark from the Park Avenue West entrance to Denver: As it separates into one-way 22nd Street and you stop at the light at Wazee and face Coors Field, about 4.5 acres of land on both sides of the elevated street contain an exciting mixed-use district – another downtown pocket of fun.