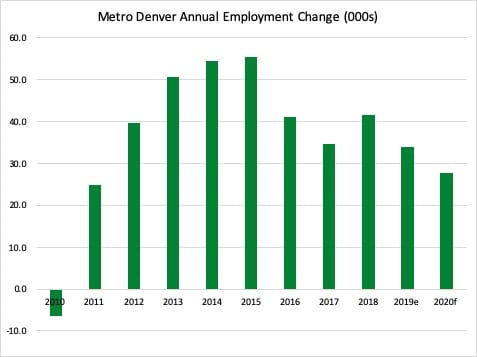 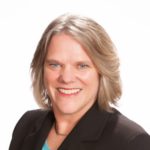 Is our vision crystal clear or clouded by contradictory information in 2020? Slower growth in China and other key trading partners, tariffs and trade disputes, market disruptions due to COVID-19 and geopolitical concerns throughout the globe mean a high degree of uncertainty in the national economic outlook. Still, current economic data suggests continued expansion at a slower pace as businesses and consumers wait for the outcome of the presidential election.

Employment. The seven-county metro Denver region is the home of about 62% of the state’s jobs. Employment increased by nearly 34,000 jobs or by 2% in 2019, reaching 1.7 million jobs. Employment growth was limited by a tight labor market and the average unemployment rate fell to a record low 2.7% for the year. The low unemployment rate put upward pressure on wages and metro Denver posted a rapid 5.1% increase in the average annual wage, a faster increase than both the state and nation. Employment growth is expected to slow to a 1.6% pace in 2020, representing the addition of nearly 28,000 jobs, and the unemployment rate will increase slightly to 2.9%. The continued tight labor market will temper job gains.

All supersectors are expected to add positions once again in 2020, the eighth consecutive year of such diverse employment growth. Transportation and warehousing employment will once again be the fastest-growing supersector in metro Denver as the record amount of industrial space completed in the region comes on line and companies ramp up employment. Professional and business services will add the most positions, supported by continued demand for high-tech workers.

Commercial construction activity peaked in metro Denver in 2018 as a record 11.6 million square feet was completed. Completions fell by 22% in 2019, falling to 9 million sf. The contraction was due to declining office and retail completions, which offset a record level of new industrial space added. Although analysts have expressed concern for the outlook beyond 2020, completions should surpass 10 million sf in 2020 as large, new buildings are delivered to the market.

Consumer activity. Consumer confidence for the Mountain Region, which includes Colorado, remained stable in 2019, with the confidence index increasing a slight 1%. As confident consumers tend to spend more and consumer spending is responsible for nearly 70% of total economic activity, the spending patterns of metro Denver’s 3.3 million people is critically important to the region’s economy.

Residential real estate. Home sales in metro Denver rebounded in 2019, increasing 3.4% after falling 4.6% in 2018. In 2020, sales are forecast to increase by 2% to about 59,600 sales. Low interest rates are expected throughout 2020 and price growth should continue at a more modest pace as new supply is added to the market at a slower pace.

New residential permit activity in metro Denver contracted by 16% in 2019 due to a large decrease in multifamily building permits. In 2020, residential permit activity is expected to contract by 3% to 19,700 units. Still, this slowdown in construction activity is not a cause for concern as the level of activity will remain above the region’s historic norms and the number of new units added to the market is expected to outpace new household formation for the fifth consecutive year, leading to improving home affordability.

Home price appreciation slowed significantly in 2019, falling from the 8% increase or more that occurred during the previous seven years. In 2019, the median home price increased 2.7% to $462,100, reflecting an increase that was lower than the national rate for the first time since 2012.

In 2020, buyers and sellers will adjust to lower interest rates and home price appreciation in metro Denver is expected to tick up to 3.5%. The ongoing economic expansion fueling wage and employment growth will support the residential market in the year ahead.