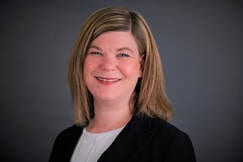 The Associated Builders and Contractors Rocky Mountain Chapter board of directors announced the appointment of Joanna Johnson as the organization’s new president and CEO.

Johnson has almost 20 years of experience in operations and management. Prior to her promotion, she served as senior director of operations after six years as director of meetings and events for the chapter. During her tenure with ABC, Johnson has overseen several initiatives including creation of the chapter’s Young Professionals group, expanding the Excellence in Construction Awards and restructuring to regional councils.