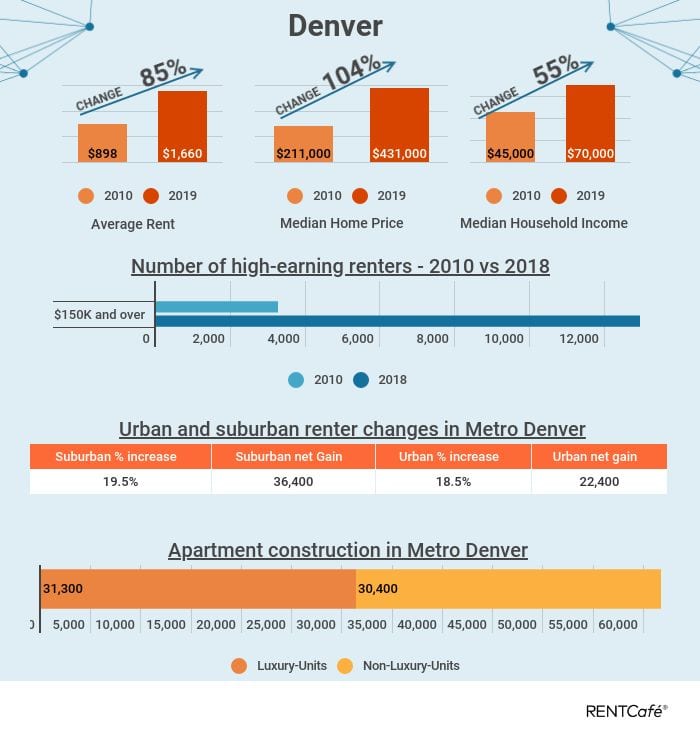 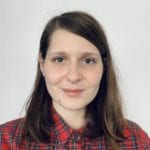 Denver has been the poster child for accelerated growth in the past decade. After recovering from the recession, the city added jobs at a healthy pace and managed to keep unemployment rates consistently below the national average. Denver’s economy has remained strong through the end of the decade in spite of a deceleration in the last couple of years, attracting an increasing number of employers with its educated workforce.

Due to Denver’s popularity among job hunters seeking prosperous employment, the city’s population surged by 21% since 2010, which has had a noticeable impact on the housing market. A wave of thriving construction helped meet the increased demand on the multifamily market, yet apartments in Denver maintained occupancy rates as high as 94%, above the national average, consistently pushing rents upward. Home prices also surged in the past 10 years, influencing the demographics behind renting and owning.

Housing costs increased at a faster pace in Denver than on a national level. The average rent inflated by 36% in the U.S. over the past 10 years, while the median home price increased by 31% during the same timeframe. Denver goes against national growth trends, as apartment rates have risen slower than home prices in the city.

While more residents began renting, their share decreased. While the number of Denver renters went up by 17% in the past decade, the number of homeowners increased faster, by 21% since 2010. The share of Denverites who rent shrunk by 2% since 2010, down to 45% at the end of the decade.

The figures come in contrast with growth trends on a country level – the renter population grew two times faster than the owner population in the past decade, and the tenant share expanded by 3%, up to 34% in 2018.

Renting has surged in popularity among Denver’s high-earners. The Mile High City came in 11th in the top 20 cities with the highest increases in the number of wealthy renters in the past decade, as the number of renter households who make over $150,000 per year quadrupled. High-earning households now make up 4.2% of Denver’s renter population, after a 298% upsurge since 2010. By comparison, on a national level, the number of wealthy renters went up by a much lower 157%.

Meanwhile, the number of wealthy owner households increased by 103% in Denver since 2010, and by 78% on a country level. 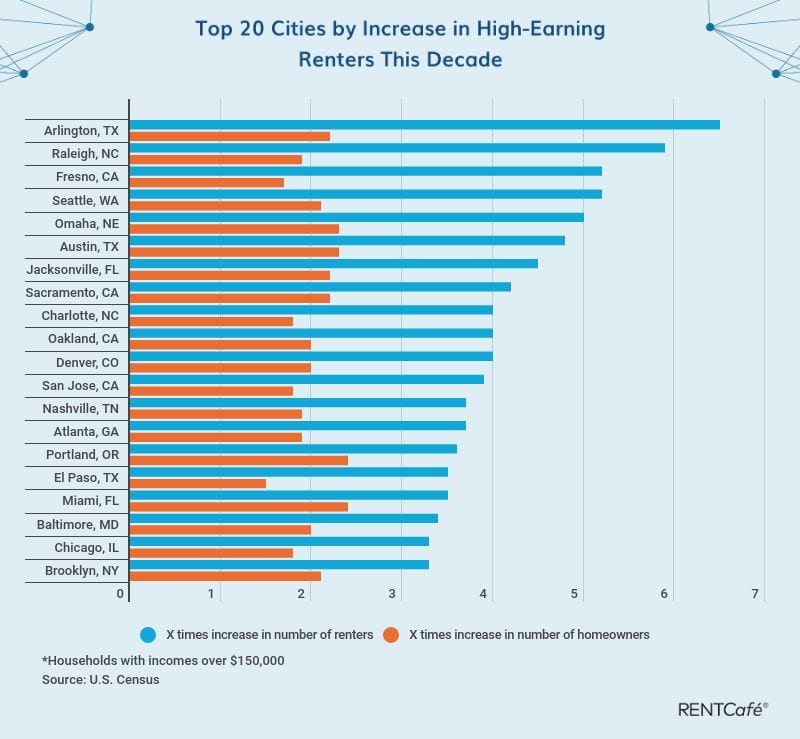 The number of residents who rent rose in every age group. The number of renters living in Colorado’s largest city rose in all age segments. However, the 35- to 59-year-old age group led the trend, with a 29% increase in their population in the past decade. The number of renters in the segment grew more rapidly than that of owners, which went up by 14% in the same timeframe. The over 60-year-old renter population expanded the second fastest, displaying a 27% surge since 2010. Sixty-plus owners were on the rise as well, increasing by a slightly lower 25%. The trend is in line with national data, as 32% more aging Americans were renting their homes by the end of the decade.

Finally, the under-34 age group renter population expanded by a much lower 13% in the past decade, while the number of young homeowners increased by 3%, the weakest increase out of all age groups.

Suburbs added renters at a faster pace than the city. In the past decade, the number of suburban renter households surged by 19.5% in Denver metro, placing it among the 20 metros where the segment grew fastest. Urban areas added renters at a slightly slower pace, with their numbers going up by 18.5% in the 2010s. The suburban renter segment expanded on a national level as well, but not as quickly as in Denver metro. The number of suburban renter households increased by 17% across the U.S., while that of urban households went up by 14%. 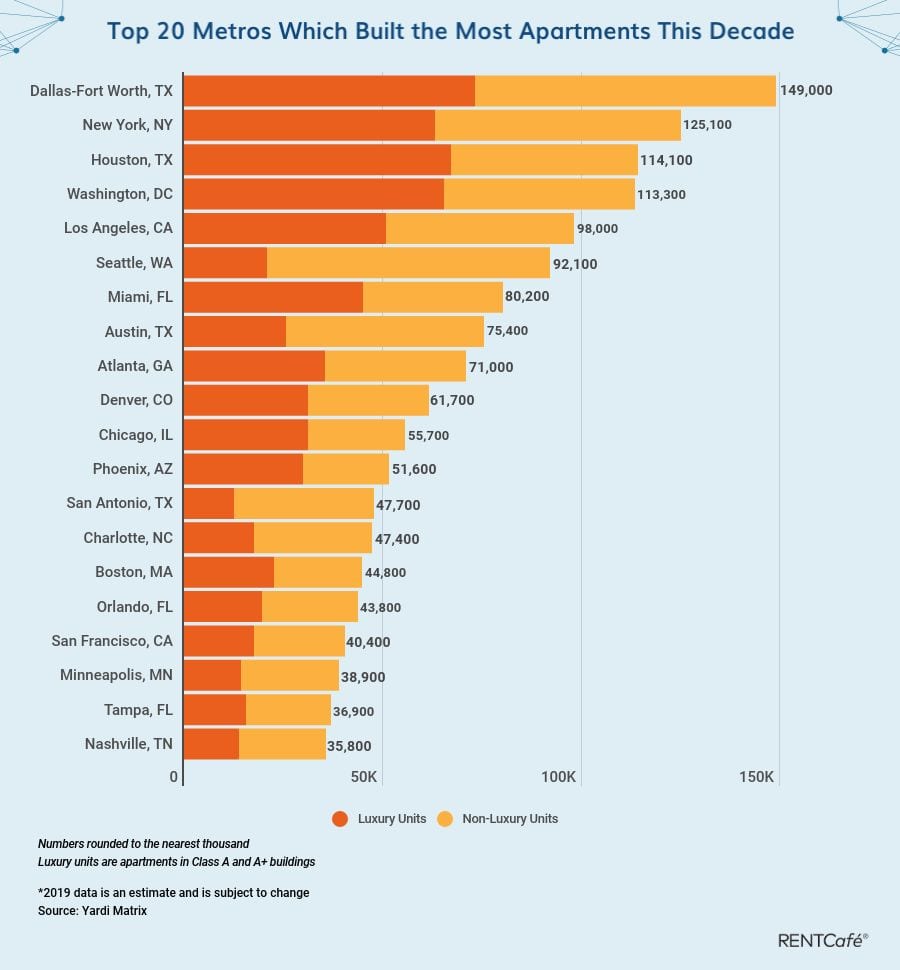 High demand and quick absorption have incentivized developers to deliver an increasing number of units in the area, while the growing number of wealthy renters has led to an upsurge in high-end apartment construction – 51% of the units delivered in the past decade are discretionary, in Class A and A+ buildings.

In terms of space, the average size of an apartment in Denver shrunk by 43 square feet in 10 years, or 5%. The increasing popularity of studios and micro-apartments explains the trend, as demand for affordable units is on the rise in the city.