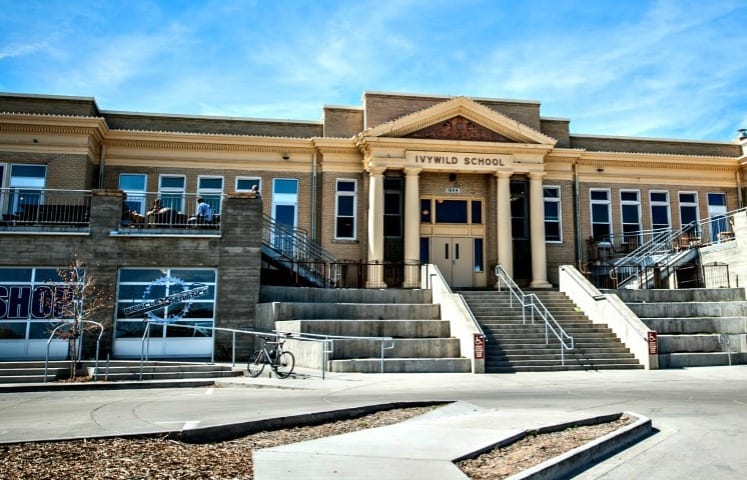 Ivywild School, a 1916-built elementary school in Colorado Springs, is an example of a successful adaptive reuse project. 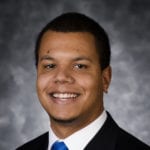 Colorado Springs has a long-standing history of following Denver’s lead, and real estate trends are no exception. One of Denver’s most remarkable transformations in recent years has been the revitalization of the River North Arts District neighborhood. Once a blighted industrial corridor with no market visibility, RiNo began transitioning at the beginning of the decade and has since become a hot spot for developers seeking to transform the real estate into desirable residential and commercial spaces. Colorado Springs has followed suit and several historic sites have been redeveloped into trendy and cutting-edge developments. These creative redevelopments are one of many factors contributing to Colorado Springs’ robust growth and increasing popularity as a destination for younger generations.

Ivywild School, a 1916-built elementary school located just south of downtown Colorado Springs at 1604 S. Cascade Ave., is the quintessential example of a successful adaptive reuse project. The school ceased operations in 2009, and, in March 2012, the building was purchased with the goal of strengthening neighborhood identity by restoring a historic centerpiece. After a year of renovations, Ivywild School opened for business in 2013.

Today, the project is home to Bristol Brewery & Pub, which began brewing beer in Colorado Springs in 1994 and moved into the school in 2013. Ivywild School also features a marketplace with several distinct tenants: The Principal’s Office, which serves beverages ranging from Ethiopian espresso to fresh-squeezed juices and handcrafted cocktails, Axe & The Oak Whiskey and Old School Bakery. In addition to bars and restaurants, Ivywild School houses Yobel Market, a craft retailer, and the offices of Mammoth Digital, a full-service marketing agency. The unique tenant mix and hip vibe draws obvious parallels to RiNo developments like The Source, which transformed an 1800-era brick factory into a destination for young people.

Another notable redevelopment is Lincoln Center, located north of downtown Colorado Springs at 2727 N. Cascade Ave. Like Ivywild School, Lincoln Elementary closed due to redistricting. The school was purchased in 2015, redeveloped and re-opened in 2016 as Lincoln Center. Food and drink are plentiful here. Goat Patch Brewing offers a wide range of beer in its taproom, which embraces the sense of community innate to The Lincoln Center’s shared space. Cafe Red Point and Building Three Coffee also call the former elementary school home. Nightingale Bread bakes organic bread on site and offers pizzas to patrons on Saturday afternoons. Perhaps the most notable reuse of space is the CrossFit SoCo Gym, which operates in the school’s restored, 9,500-sf gymnasium.

Well-known restaurant and brewery brands that have succeeded in Denver see the potential for growth in Colorado Springs as well. In 2017, Oskar Blues opened an entertainment concept in downtown Colorado Springs. The venue, located at 118 N. Tejon St., serves food and has two bars with a total of 72 taps for draught beer with seating for 400 patrons to enjoy live music. At maximum capacity, Oscar Blues Colorado Springs an accommodate 700 people and is twice as large as the Oscar Blues locations in Denver and Longmont. The Atomic Cowboy/Denver Biscuit Company/ Fat Sully’s chain that has thrived in several locations in Denver is scheduled to open a downtown Colorado Springs location as well this summer.

Just as hip and trendy developments revitalized antiquated industrial buildings in Denver’s RiNo neighborhood, Colorado Springs has done the same with Ivywild School and The Lincoln Center. Though this is only one part of the larger story of economic gains, these redevelopment projects have helped fuel an incredible growth story in Colorado Springs. From 2014 to 2017, El Paso county saw the second-largest population growth in Colorado, according to the Colorado Department of Local Affairs. This population growth is due in large part to an influx of younger residents. Colorado Springs saw a 14.7 percent millennial growth rate from 2010 to 2015, which was the fastest rate of any city in the nation, according to a report by Brookings Institution. Of all the residents in Colorado Springs, 26.4 percent are millennials, which is the sixth-highest percentage in the nation. Most notably, Colorado Springs was recently ranked the No. 2 best place to live by the U.S. News & World 2018 Report. The evidence suggests that Colorado Springs may no longer be simply trailing Denver’s growth, but implementing the same winning adaptive reuse strategies to become one of the most desirable locations in the state.