If Amazon HQ2 comes to Denver, where might it go?

This is a special edition of the series on Denver’s “Whale Sites,” defined as extremely prominent and underdeveloped land parcels whose size and location will define Denver’s future growth and development.

Introduction. The early September announcement that Amazon issued a request for proposals for a second headquarters is a big deal for Denver’s whale sites. Amazon’s announcement was quickly followed by Slate and the New York Times anointing Denver as in the top tier and winner, respectively.

Commitments by local, state and regional economic development agencies to pursue Amazon also came along. As of Oct. 19, the state will be submitting its proposal for incentives, which will include an unknown number of site-specific proposals prepared by metro Denver local governments. Amazon is expected to make its site preference known in April.

While purely speculative, we’re going to compare Amazon’s stated requirements to several of Denver’s whale sites. Just how “available” and “ripe” are these sites? Would they be a good fit for a second Amazon headquarters, contain 500,000 square feet by 2019, and ultimately accommodate up to 50,000 employees and 8 million sf of space?

– An urban or downtown campus

– A development-prepped site. We want to encourage states/provinces and communities to think creatively for viable real estate options, while not negatively affecting our preferred timeline.”

The company also notes interest in existing or new buildings, shovel-ready greenfield sites, infill opportunities and the ability to meet the project’s timelines. The expectation of a half-million sf of building being available in 2019 suggests something other than a greenfield site. Other criteria such as mass transit serving the site, and being 30 miles from a population center, 45 minutes to an international airport and 1 to 2 miles to a major highway, are manageable.

Amazon’s current headquarters contains 8.1 million sf over 33 buildings, is effectively served by mass transit, is very urban and located about a mile from downtown Seattle. The neighborhood, known as South Lake Union, has some parallels to Denver’s RiNo neighborhood. The core of the campus was first established in 2012, when Amazon paid over $1.1 billion, or $644 per sf, for 11 building sites partially under construction.

•The best sites in the Denver metro. With regrets to several communities and landowners around the Denver metro, this is a speculative listing of potential sites, in no particular order. The listing focuses on physical features, personnel travel and logistics, and time to operations. It drops several sites for logistical reasons and does not consider potential economic incentives. It assumes environmental cleanup if needed, and committed landowners and developers. Strong local government effort is expected to facilitate and contribute assemblages, fund infrastructure, and expedite planning, rezoning or entitlements. As of this writing, it appears that local governments are nominating most if not all of these locations. 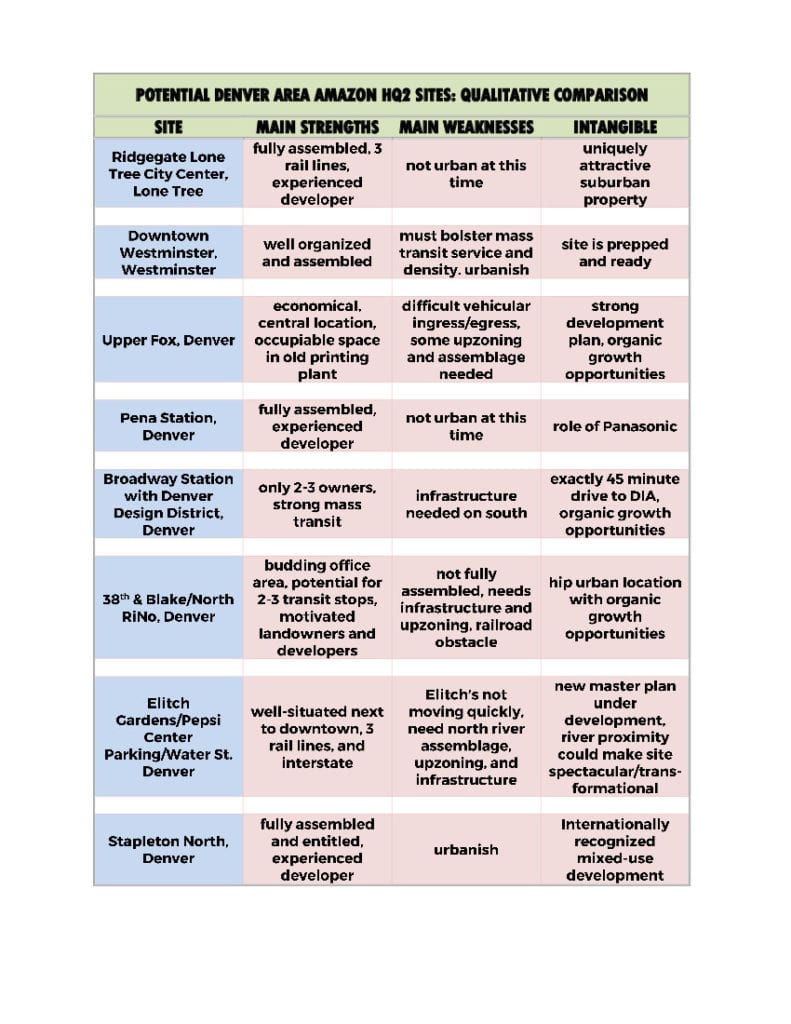 •And the winner is …The sheer physical size of HQ2 dictates a central location with the ability to accommodate significant mass transit and roadway infrastructure. To get a feel for this, consider that Amazon proudly asserts that 15 percent of its 40,000 Seattle employees live in its campus’ ZIP code, and about 20 percent walk to work. The RFP also states: “Personnel travel and logistics needs, both from population centers to the project site, as well as between company facilities, are critically important.”

Realistically, only downtown and near downtown Denver contain the dense development that effectively serves as a “population center.” Another consideration is that Amazon’s predominant HQ2 employee will be a millennial software developer, a demographic that typically skews male and urban. So the avocado toast should be in walking distance. This is the likely reason Amazon’s current headquarters is based in (what is now) downtown Seattle. These circumstances suggest four sites in Denver.

Big-picture thinkers might dismiss the short-term challenges and point out that the 2027-2032 end state is the only thing that matters. In other words, there is plenty of time for Amazon to create the finest urban campus in the world. This argument would settle on the Elitch Garden/Water Street/Pepsi Center site and develop a plan that restores a mile-long stretch of the Platte River, weaves a new urban setting along a natural watercourse, while enjoying outstanding connections to downtown, three train stops and rail lines, and Interstate 25. This would be a long game given that the amusement park is planned to remain operational over at least the midterm.

If you’re a tactical site selector for Amazon, you may have some deeper, pragmatic insight on the criteria and know there are some nonnegotiable requirements. This means you’re moving into the northern end of RiNo, engaging with existing building projects such as Rock Drill, the Hub or the World Trade Center, and seeking links over the rail lines, particularly north of 38th to the Pepsi Distribution facility and the Westfield property. Long-term, Amazon could eye the 30-acre, city-owned Coliseum and connections to the planned N-line station serving the National Western complex. Mass transit service will need to be boosted at the 38th and Blake station, including the D Line’s Welton Street/Central Rail line extension. Improved rail crossings to the north would be a must.

The third location is Upper Fox. This site could quickly adapt the former Denver Post printing plant to obtain 300,000 to 500,000 sf of office space. The remainder of the site’s 40 acres would need significant infrastructure investment, and additional surrounding land would need to be acquired. Questions needing resolution include upzoning on adjacent land, whether one rail line is adequate, and the expensive proposition of bolstering access to abutting interstate highways.

The final Denver location would combine the Broadway Station/former Gates plant and Denver Design District. Two rail stops, four rail lines and RTD’s second-busiest station (I-25 and Broadway) serve the site. There is a need for improved I-25 connections, and construction of one is planned next year. The Broadway Station/former Gates plant recently was upzoned and exhibits an impressive master plan. RTD’s 5-acre station site will need improvements, but new buildings planned north of I-25 should accommodate immediate space needs.

Regardless of the site, the Denver metro wins if any of these properties is selected. The real estate cycle will essentially be reset to “start.” 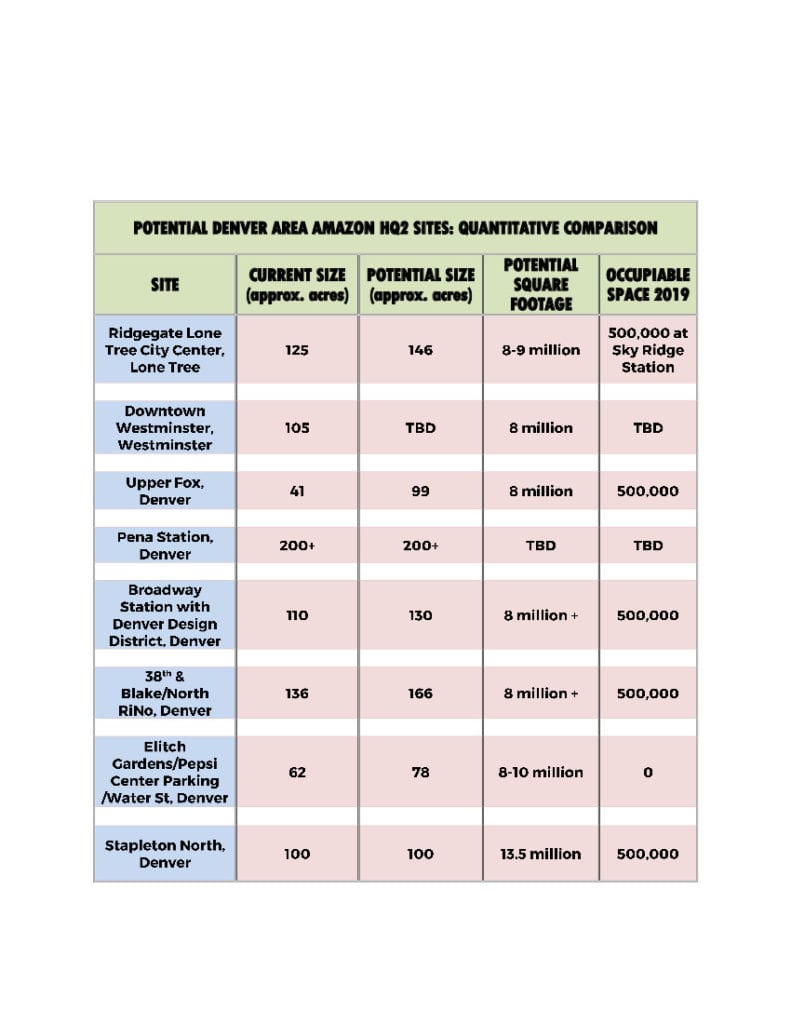 Ferris’ firm, the Real Estate Garage (http://realestategarage.net), focuses on maximizing the production of real estate plans, projects and approvals, including entitlement processing coordination and rezoning. Ferris previously served as an appointee of Denver Mayor Michael B. Hancock, running Development Services for the city of Denver. He also has engaged in $1 billion plus of feasibility and development management work in the private sector, and served as director of planning and town manager for the town of Telluride. He holds degrees in civil engineering from Marquette University, urban planning from Cornell University and a Master of Business Administration from the University of Denver.