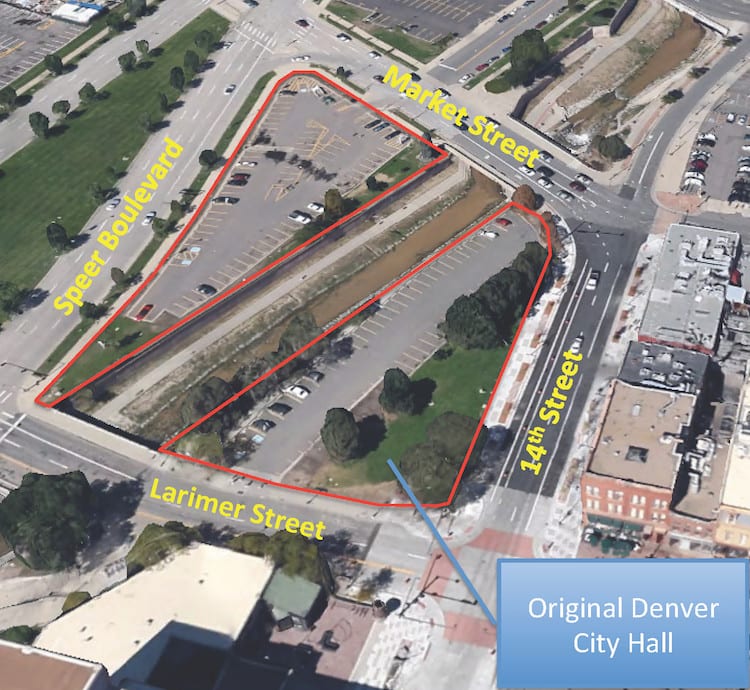 An aerial view of the Bell Tower Site, looking northwest

This the first in the series on Denver’s “Whale Sites,” defined as extremely prominent underdeveloped land parcels whose size and location will influence Denver’s future growth and development. Examples include the Bell Tower site, Aquarium Parking Lots, Burnham Yard, the former Denver Post Printing Site and Peña Station Next.

The “Bell Tower” property straddles Cherry Creek and is surrounded by Speer Boulevard, Market, Larimer and 14th streets. It takes its name as the historic site of Denver’s first City Hall, which contained a bell tower, the bell from which is mounted on a pedestal on the southeast corner of the site. The easternmost portion of about 24,700 square feet is oriented to Lower Downtown and is often termed Bell Park, but it is not a park. The western portion, sitting across the creek along Speer, is about 40,700 sf. (Note: Square footages are based on the current site zoning documents.)

Making development difficult is the fact that the site defines downtown Denver and its relationship to the Auraria campus; moreover, it is physically bifurcated into the two described triangles by Cherry Creek, which in turn serves as a public parkway, flood-control feature, bike path and waterway. Any crossing or access to it requires close scrutiny.

Development on the site must also observe a west-facing mountain view corridor blocked by a five-story building only 600 feet across Speer. It is also subject to three LoDo design review subareas and limited by an outdated 2006 PUD zoning scheme. In sum, the site’s constraining physical features are exacerbated by awkward regulatory obstacles.

Some Insight and History

Development plans for the 65,000-sf site have a brief if challenging history. They date back to the 2006 PUD zoning approved for about 94 percent of the site, which enabled a needle-tower apartment on the northwest triangle and a five story building on the southeast, both of which were close to LoDo design review approval when they were felled by the 2008 crash. The existing zoning does grant two development plan options, but otherwise exhibits a regulatory scheme that requires patience. The PUD was intended to capture aspects of the historic site and respect the low-scale development pattern of LoDo, but primarily on the Bell Park portion. The remainder of the site is granted significant density, but is regrettably subject to a 7,500-sf building footprint.

Buzz Geller, who owns the land as part of the Paradise Land Co. (https://paradiseland.com) has seen numerous development plans, from Carmel apartments to most recently a W Hotel via the Hines Corp. Geller noted that the site is “the best in all of downtown, but unique and must be considered potentially iconic.” Overcoming the challenge, or riddle, to the site’s limitations requires a bet on the elite level of pricing that comes from its prominence, guaranteed views and proximity to Larimer Square.

The PUD offers two design options: One requires a needle tower with a 7,500-sf-maximum floor plate and the alternative seeks five- to eight-story building height limits across both sites. The crux of the regulatory challenges is that the higher density option within the PUD zoning calls for a building that can no longer be built. As most building code experts know, stairwell separation and elevator shaft code requirements adopted since 2006 essentially reduce a typical 7,500-sf-rentable floor plate close to 20 percent. In addition, the east and west triangles must be developed either simultaneously or sequentially.

The zoning further enshrines a southwest-facing mountain view corridor, starting at grade at the corner of 14th and Larimer. Rising slowly from this unusual origin point, it significantly impedes development on about one-fourth of both development sites. Not only is this view corridor impractical, but it is already blocked by CU Denver’s Auraria campus building, which came about because the state of Colorado elected to ignore the view corridor under its public code exemption authority.

Complicating matters is that any rezone process would have to engage neighborhood representatives, city planning staff and the Lower Downtown Design Review Board prior to reaching the city’s planning board or City Council. The view corridor change also would require a separate City Council legislative act. Most estimates suggest processing rezoning would require a minimum of 24 months.

With time and resources, one might come up with several creative solutions. The two sites could be separated for development timing purposes, or the city may be able to reduce the regulatory burden by unilaterally amending the site’s regulatory scheme (a project that would need to have its own public purpose). Or, a buyer might be able to justify the holding costs by capturing a premier offering, say for office space and parking complementing Larimer Square.

But, the blunt reality may lie in two options rendered below. Option 1 is to dig deep and pursue a two-year-plus entitlement process, with some assurances that the view corridor can be lifted and a belief that the solution that makes the development numbers work will be acceptable to the regulators and ultimately City Council. This option could pursue two projects, the first would be a five-story building at 14th and Larimer that fits the LoDo context, and the second would be a tower at Market and Speer that accommodates a transition between the west and east sides of Speer.

Option 2 is to pursue a design under alternative 2 of the 2006 PUD, which would create roughly two five- to eight-story buildings. Economic assumptions regarding the value of the site as a marquis pricing option, and perhaps physical relationships to the established success of Larimer Square, would have to be embedded in such a proposal.

Ferris’s firm, the Real Estate Garage (http://realestategarage.net), focuses on maximizing the production of real estate plans, projects and approvals, including entitlement processing coordination and rezoning. Ferris previously served as an appointee of Denver Mayor Michael B. Hancock, running Development Services for the city of Denver. He also has engaged in $1 billion-plus of feasibility and development management work in the private sector, and served as director of planning and town manager for the town of Telluride. He holds degrees in civil engineering from Marquette University, urban planning from Cornell University and a Master of Business Administration from the University of Denver.