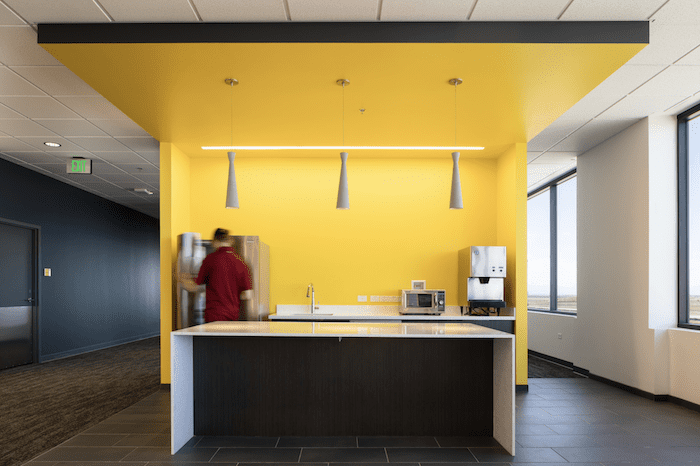 A gray color scheme with bright yellow accents is used throughout

Kärcher, the world’s leading provider of cleaning technology, consolidated its manufacturing from campuses in Englewood and Camas, Washington, to create a new 380,000-square foot build-to-suit headquarters facility. The campus features approximately 275,000 sf of warehouse, research and development, and manufacturing space along with 100,000 sf of office space on a 23-acre site. The new facility is located in the Porteos development near Denver International Airport.

“This new state-of-the-art facility is designed to allow Kärcher to operate more efficiently, optimize its manufacturing and production capabilities, and improve its customer experience – all while positioning the company for future growth,” said Matt Chaiken, principal of Ware Malcomb’s Denver office. “We worked closely with Kärcher to ensure every element of the project – from the civil engineering and land surveying process to the architecture and interior design – met the company’s immediate needs and specifications, as well as its long-term goals,” said Chris Strawn, principal of Ware Malcomb’s Denver civil engineering office.

The building interior features an open three-story staircase with decorative linear lighting and cable railings. A gray color scheme with bright yellow accents is used throughout the common areas and within architectural lighting, reflecting Kärcher’s corporate colors and the color of the equipment the company manufactures. The design team sourced materials that were textural in nature to give the interior space further dimension. Office and conference room fronts used a furniture glazing system that helped keep construction on schedule and on budget, while providing for future flexibility. The building’s exterior envelope utilized integrally insulated, painted tilt-up concrete panels with reveals. Storefront and curtain walls also were used for the office area. The exterior utilized the same colors as the interior to reflect Kärcher’s corporate branding, including a yellow parapet cap.

The civil engineering design and land surveying services for the site was accomplished with balanced earthwork through the grading and drainage design along with the associated parking lots, loading areas, drive lane, and utilities required for the building. A subdivision plat also was prepared by the Ware Malcomb land surveying team. Water quality was provided on-site in a pond that was designed at the south end of the project to meet the city’s requirements for the current and future build out and connected to the area’s regional detention facility.

As for site challenges, the three-story precast office panels were crane picks of over 200,000 pounds, which required crane access too close to the building to allow the panels to initially be supported from the exterior.

SunCap Property Group developed the project, which came in on time and under budget.