CannonDesign in Denver: Embracing its Roots 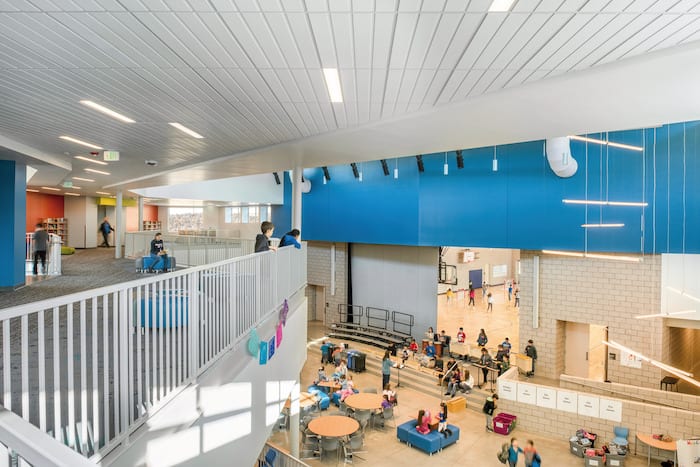 CannonDesign’s new home in the RiNo Arts District has roots stretching back more than 40 years in Denver.

The history gets a bit labyrinthine, however: Denver’s Klipp Architecture opened its doors in 1979; California’s gkkworks acquired Klipp in 2012. Founded in Denver in 1989, Bennett Wagner Grody Architects joined CannonDesign in 2017. CannonDesign, first established in 1945 in New York, now has 19 offices and about 1,000 employees in all. The combined portfolio of these four firms has dots all over the Colorado map, from the U.S. Air Force Academy to Colorado Mesa University to the University of Colorado Anschutz Medical Campus to the Denver Museum of Nature & Science, as well as most major school districts in Colorado.

But this month, CannonDesign’s Denver office has cemented its new, singular identity with a new home in a slickly renovated ex-sausage factory in RiNo. All 41 employees made the move to the new office, which has space for 80. (Bowie, the office dog and “happiness ambassador,” made the move from BWG’s former home off Speer Boulevard in downtown Denver as well.) 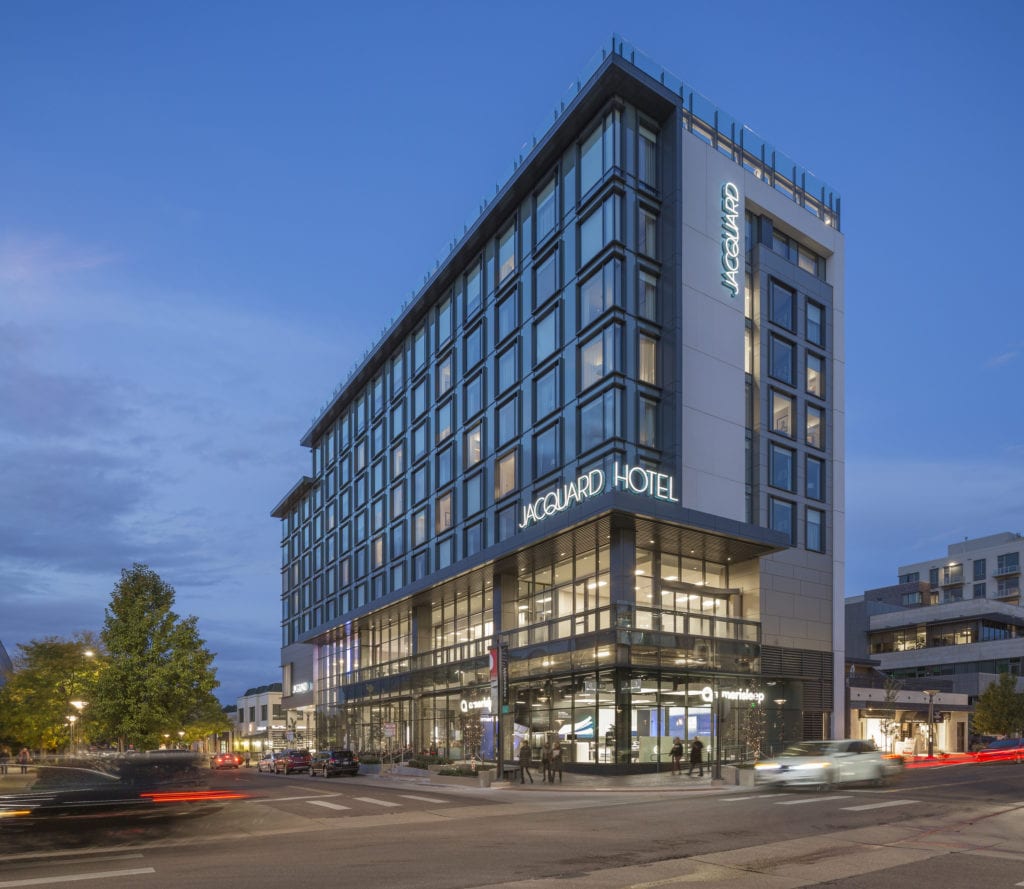 The recently completed Jacquard Hotel was designed by CannonDesign.

Denver Office Practice Leader and Senior Vice President Tim Barr joined CannonDesign in 2019 after working in business development for construction and architecture firms in Colorado and California for more than 20 years. He says he’s worked hard to foster an office culture that builds on the “three-way marriage” of the predecessor firms. “There’s a balance,” he notes.

Education and health care “are our big anchors,” says Barr. In Denver, those two industry-leading global practices are complemented by a growing hospitality practice with recently completed projects including the Jacquard Hotel & Rooftop and Halcyon Hotel in Cherry Creek.

Regardless of market or typology, a focus on human experience is the connective thread.

“First and foremost, we call ourselves a living-centered design firm,” says Barr. “Our mission in that is to really focus on helping humans flourish in everything we do. Architecture supports that.”

He points to a hospital as an example. Most firms focus on the patient experience. “CannonDesign takes it a step further and asks, ‘How can we make the janitor in the hospital feel as valued as the patient?’ It becomes more of a continuum of the people working at the hospital and the patients that are being treated there, and how the architecture of the building interacts with the community around it. There’s a big holistic view.” The education practice takes an outcome-oriented approach, embracing daylighting, open classrooms, and spaces that emphasize engagement and interaction.

Senior Vice President Anne Weber, director of the K-12 Studio at CannonDesign’s Denver office, calls designing schools “a passion,” noting, “I feel designing schools for young people is really critical. It’s part of their formative years, and there are a lot of data that shows the physical environment of a school impacts learning.” 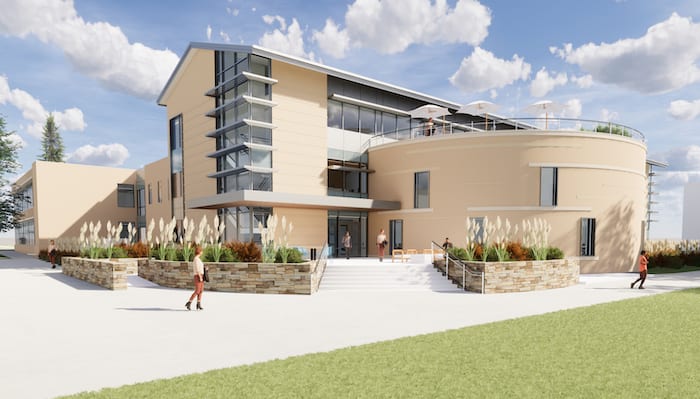 The ongoing $43 million expansion and renovation of Shepardson Hall is one of several CannonDesign projects at the Colorado State University campus.

Weber says that this link is a tenet of the concept of “21st century learning” that she and her colleagues have embraced for the past decade. However, it doesn’t mesh well with the legacy of schools with cookie-cutter classrooms lining the halls. “We were all taught the same way, and you survive or you don’t,” says Weber. The modern take is based on students having a variety of different learning styles, or “differentiated learning.”

By rethinking traditional classrooms and establishing flexible spaces that foster collaboration among both students and teachers, schools are able to break the old mold. “We call it adding soul to the data,” she adds. “Then you have the type of spaces that supports learning the way it needs to happen today.”

The ongoing $43 million expansion and renovation of Shepardson Hall is one of several CannonDesign projects at the Colorado State University campus in Fort Collins.

It’s all about catalyzing the aforementioned “human flourishing” for students in the agricultural sciences program when the building is finished in 2021. “Their mission is how to feed the world,” says Barr.

One standout feature of the 46,000-square-foot building: A 200-seat classroom in the round “is one of a handful in the U.S.,” says Barr. “It breaks the mold of your traditional classroom. There’s research coming out about how students interact with the teacher, and we can use a circular classroom to bring people in closer together to change the face of education a bit.”

The big takeaway? “The physical characteristics of those classrooms correlate with learning outcomes,” says Brown, noting students’ grades went up in circular classrooms as withdrawal rates went down. “You’re face-to-face with other students, so there’s more accountability.”

Brown calls CannonDesign “a great partner” based on four on-campus projects. “We’ve found them to be very creative and responsive to our needs and the clients’ needs,” he says.

As education gravitates to online models, certain disciplines will always need a brick-and-mortar presence. Students in science and medicine “are still going to have to go to a physical building,” says Barr, noting that the firm is able to apply lessons learned in education that apply to health care, and vice versa. “How do we not silo ourselves off but play off all the strengths we have as an office?”

This kind of innovation has emerged as a calling card for CannonDesign, he adds. The firm made Fast Company’s “10 Most Innovative Companies in Architecture” in 2017 “for taking a quantitative approach to architecture” and 2019 “for fostering healing environments for sick children.”

It’s about evolving processes and a data-centric approach. Advancements in modular construction could cut design and build time in half for health care projects, says Barr, noting that the firm is the lead design firm for the ModularDesign+ alliance.

CannonDesign also has an internal software group in FOS (Facilities Optimization Solutions). The firm regularly uses its own tools to assess the facilities of an entire school district as its puts together priorities for bond funding, and has worked with Denver Public Schools, the Cherry Creek School District, and the Brighton School District in this regard.

“We can go into 50 buildings and catalog everything that they’ve got in those 50 buildings,” says Barr. “Our education group has an overlay where we’re actually looking at student adequacy scores within those classrooms … We can actually point to data to say, ‘In this classroom building where there’s more daylight, students are performing at a higher level than these students that don’t have the same daylight.’”

Back at the new digs in RiNo, Barr says a flat organization with “leadership at every level” is his aim for the office culture. “I want people who come in here right out of school to feel like they’re leaders in the firm,” he notes. “How do we mentor and how do we grow people, but also give them a sense of ownership and responsibility? Everybody adds value. I don’t care where you sit.”

James Naylor, a relatively new hire, joined CannonDesign as a junior designer in Denver last March. Part of his decision was guided by the firm’s data-centric methods, but he also saw the potential for career growth. “It’s a really good place for people at the stage I’m at in my career,” he says. “It’s a very interesting office in that it’s three firms that joined together.”

Naylor says he’s been especially impressed by “the vast variety of knowledge” in diverse areas of architecture to be tapped into at the firm. “People have 20-, 30-plus years of experience,” he notes. “It’s really nice to have that.”

As far as career opportunities at CannonDesign go, “The sky’s the limit,” he adds. “It’s really up to you.”