Construction continues on The Lydian in Five Points neighborhood 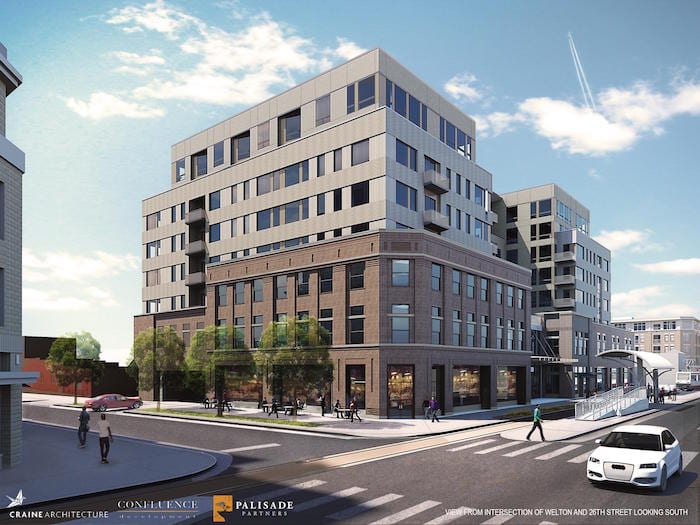 The active uses planned for the spaces will bring the building to life and will add to the terrific energy found on the Welton corridor, according to architect Dan Craine.

Construction continues on the $50 million Lydian, an eight-story mixed-use development at 26th Avenue and Welton Street, in downtown Denver’s historic Five Points neighborhood at 2590 Welton St. It is being developed by Confluence Cos. and Palisade Partners.

The Lydian will include 129 apartment residences (with 22 of the units being affordable at 80 percent area median income).

“The intent of the Lydian’s design was to enhance and reaffirm the genuine urban fabric of the Five Points historic cultural district,” said Lydian architect Dan Craine of Craine Architecture. “Patterning, scale, materials and transparency techniques were used to accomplish this intent. Most importantly, the active uses planned for the spaces will bring the building to life and will add to the terrific energy found on the Welton corridor.”

The Lydian is scheduled for completion in June, when the first residents will begin moving in. In addition to apartments, it will include 15,000 square feet of office space and 9,000 sf of ground-floor retail space. Colorado-based Confluence Cos., which has completed 21 multifamily projects in metro Denver since 2010 with over 2,100 total units, has five other projects planned or under development.

“The Lydian is located one block from the historic Rossonian Hotel, in the heart of Five Points, one of downtown Denver’s most rapidly emerging and desirable places to live and work,” commented Tim Walsh, founder of Confluence Cos. “Along with Palisade Partners, we’re proud to be among the first developers to play an active and prominent role in the neighborhood, and we’re looking forward to delivering a signature project for the entire community. A project of this complexity took years in the making and a partnership with DURA, OED, and FirstBank to finance.”

The Lydian is on the light-rail stop at 26th and Welton, providing residents and office tenants with easy access to Denver International Aiport, Union Station and the entire light-rail system. The building itself will include a two-story lobby with an open marketplace for shopping, a pool and pool deck on the third floor, a fitness room, and a conference room. The apartments will range in size from studios to one and two bedrooms. Ten penthouse units will also be available on the top two floors.