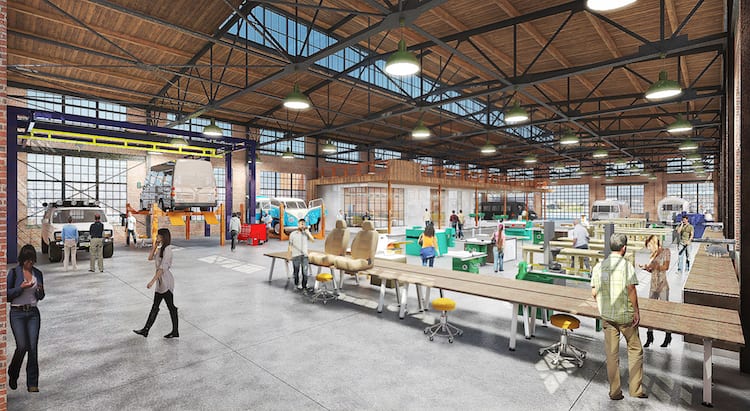 But LoDo and RiNo don’t have a monopoly on cool.

The Blacksmith Shop, a 1922 brick building with 22-foot vaulted timber ceilings, natural light and roll-up garage doors, is in northwest Globeville. The 20,000-square-foot building represents a rare availability in the 700,000-sf Colorado Trade Center at 5151 Bannock St. in Denver. 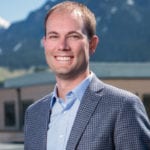 “It has great character. I think a lot of tenants these days are looking for cool space,” said Ben Woolf, director of commercial investments for trade center owner Conscience Bay Co. “RiNo has been changing so quickly that there are probably some tenants who have been over there but are getting priced out of the market. This is a good area that’s not too far away from that.”

When it opened in the early part of the last century, The Blacksmith Shop was just that – a blacksmith shop. The 40-acre Colorado Trade Center, an Interstate 25 landmark with a distinctive, nearly 300-foot smokestack, was built to service and repair locomotives, and blacksmithing was done inside the building.

“There was 100 years of soot on the ceiling and the bricks” when renovation began last year, said Woolf.

Over time, about half of the trade center was transformed from locomotive shops into freezer and cooler space, which is nearly impossible to find in Denver today and stays fully leased. In addition to food distributors, the center’s main, 550,000-sf building houses tenants including Condit Exhibits and Colorado Doorways, which have brought unique, modern touches to their workspaces, and Namaste Solar installed a 316-kilowatt rooftop solar array.

Between 720 and 750 employees at a time work at the trade center, according to Harold Marshall, who has been affiliated with the trade center since 1984. What draws tenants to the center are “location and how much parking we can give them,” he said.

“We see this as a central site with great highway access. I think that has really attracted a lot of the tenants over the years,” concurred Woolf, explaining vehicles can enter I-25 at either 48th or 58th avenues, it’s a mile to Pecos Street and Interstate 70, and downtown is within a 3-mile reach.

Conscience Bay acquired the trade center in 2015 as a means of preserving investor capital over the long term, and it also was attracted to the historic buildings, Woolf said.

The Blacksmith Shop honors the building’s history and also calls attention to the fact that “you can make things here. A lot of our tenants here are making important parts of the local economy, and so we kind of wanted to grab onto that idea,” he said.

The wide-open, column-free layout allows flexibility for uses ranging from creative office to light assembly to manufacturing. The building also has ample power.

“If I were a company and I was looking at moving into a complex like this, I would look at stability of the landlord, stability of the tenants. These tenants are all long-term tenants, 15- to 20-years lease as an average,” Marshall commented.

Myles said industrial users in RiNo face escalating rents and often are limited to short-term lease options because the area is redeveloping so quickly. They’re at the doorstep to I-70 reconstruction and the traffic disruption that will entail.

“This is an opportunity on the west side of the I-70 construction. It’s still very accessible to the northwest market and Boulder, and similarly that central market and southwest,” he said. “It’s a cool building that I think somebody, once they price out opportunities in the marketplace, would find is in a really unique setting, plus the trade center is a secure facility,” he said.

As part of The Blacksmith Shop renovation, Conscience Bay added landscaping and picnic tables outside the building’s main entrance. The building has LED lighting and upgraded HVAC to reduce energy consumption, along with new windows and restrooms. Myles and Cushman & Wakefield Managing Director Tyler Smith are marketing the building for lease at $15 per sf triple net.

Stantec in Boulder assisted in visioning and renderings for the project, while Intergroup was involved with site planning and traffic flows.

The Colorado Trade Center has a small park with a walking trail, and a dog park, and it operates 24/7.

While not imminent, a second historic renovation could be coming to the Colorado Trade Center in the future: the power plant, a 12,000-sf building with soaring ceilings that currently is used for storage.

“It’s a super cool structure,” Woolf said. It’s also a costly project that lends itself to a three-story office building or “something unique,” and will depend on finding the right user, he said.