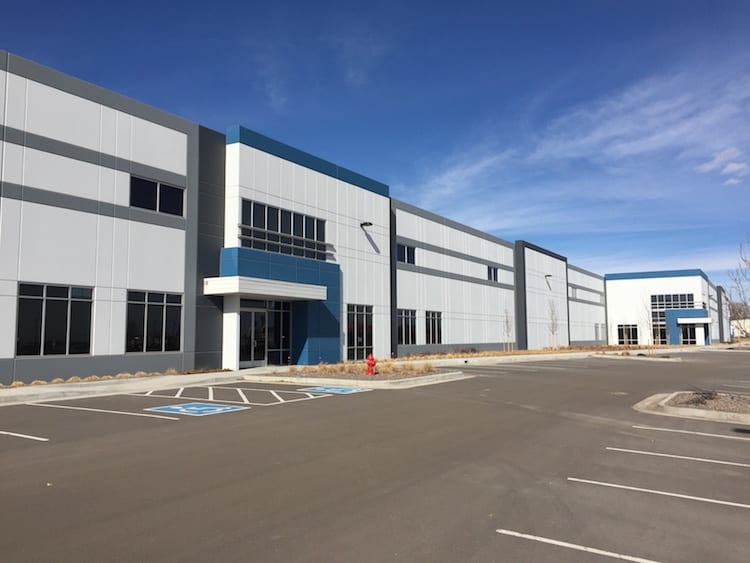 Building 1 accounts for 169, 210 square feet of the nearly 674,000 of speculative industrial development at Crossroads Commerce Park.

All 673,288 square feet of speculative industrial space at Crossroads Commerce Park has leased, right on schedule.

Clearwing Productions and Battery Systems leased the last 39,027 sf and 15,804 sf, respectively, in Building 1, one of three spec buildings Trammell Crow Co. has developed at Crossroads. The 77-acre Class A industrial park also includes seven build-to-suit buildings, all but two of which have, or will be, sold.

Crossroads is a 77-acre redevelopment of a former smelter site that stagnated for decades before an EnviroFinance Group affiliate acquired and spent four years cleaning up the property. Trammell Crow purchased the property in partnership with Principal Real Estate Investors and has seen a steady flow of industrial users to the development.

“Four-and-a-half years ago, when we started working on the project conceptually, the central market had not seen any development in 10 years, and obviously since we started working on the project, we’ve enjoyed so much success,” said Trammell Crow Senior Director Ann Sperling. Other major developers have followed suit with nearly 1 million sf of additional industrial development in the vicinity, she noted.

The development provides a central Denver location for industrial users with customers throughout the metro area as well as new, efficient space in a market where many companies have been displaced by redevelopment in River North, for example.

The location and highway access have been key to many users locating there, according to Newmark Knight Frank Senior Managing Director Tim D’Angelo, who, with NKF’s Mike Wafer and Michael Wafer Jr., represents Trammell Crow in leasing and sales at Crossroads Commerce Park.

Also, “The ownership was extremely responsive and expert at consummating transactions,” he said.

“The projected absorption was on an aggressive schedule for the sale of this project, and we were able to meet it,” D’Angelo said. “With large projects, you can accommodate everyone at the beginning, and then there are fixed spaces that sometimes take longer to fill. We were very fortunate to achieve 100 percent leasing with a flurry of activity at the end of 2017 and make it all fit,” he said.

“It’s been sort of an extraordinary process of partnering with a lot of different players, and a much more complex development than many,” said Sperling. “The city of Denver and Adams County have played a huge role in making this happen, as well as the Colorado Department of Health and Environment and the EPA. It’s really been a long journey to get this project to a place where it’s generating so many jobs for the local community, and it really had a lot of public involvement to make that happen.”

Sperling, who noted improvements for some tenants still are under construction, said Trammell Crow doesn’t have immediate plans to sell the leased buildings.

“We just got the final lease fully signed by all parties, so what we’re really going to do is take a deep breath and enjoy having it 100 percent leased,” she said.