Junction 23 at Denargo Market will be WeWork’s second location in River North. It will be geared to larger companies.

This year could be even bigger.

With nearly 700,000 square feet of office space in Denver, the coworking company says it’s on track to grow even more across the region in 2019. It’s already leased 85,000 sf for a second River North location.

“The start of 2019 has been a rapid one for WeWork in Denver, but also a meaningful one,” said Tanya Nygaard, WeWork community director. “When I joined WeWork, we only had two buildings, a lean team and few playbooks. Today, as we look to grow significantly in 2019, we have the benefit of many iterations on the playbook and with the collaboration of a deep cross-functional team.” 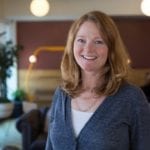 “Throughout any city, WeWork aims to provide members with a constellation of building types, from AAA to buildings on the National Register of Historic Places, and in different areas, including RiNo,” said Nygaard. “We are tailoring Junction 23, an absolutely incredible space, to larger companies. With easy access from the highway, a stone’s throw from Coors Field and popular Larimer Street, it will be an amazing place people want to come to every day.”

“EverWest has a well-earned track record for successful redevelopment projects in key growth markets across the U.S.,” said EverWest Executive Vice President of Development Services Larry Lance. “It’s a pleasure to bring that expertise to our home market with a project like Junction 23, which will give WeWork a creative, highly modern environment from which they can work and grow.”

According to Nygaard, “2019 is a year of growth, but it’s also a year of impact and increasing our value proposition to members and the city.” WeWork’s social impact focus locally will include creating the new “Town Hall of the 21stcentury” for conversations about climate change, elections and other important issues; partnering with Flatiron School, which trains students in industry-leading software engineering, UX/UI design, and data science; and WeWork’s Veterans in Residence Program aimed at helping veterans and military spouses become entrepreneurs.

Globally, WeWork has more than 400,000 members and 425 physical locations in 27 countries. The company opens, on average, 1.5 million sf of space every month.