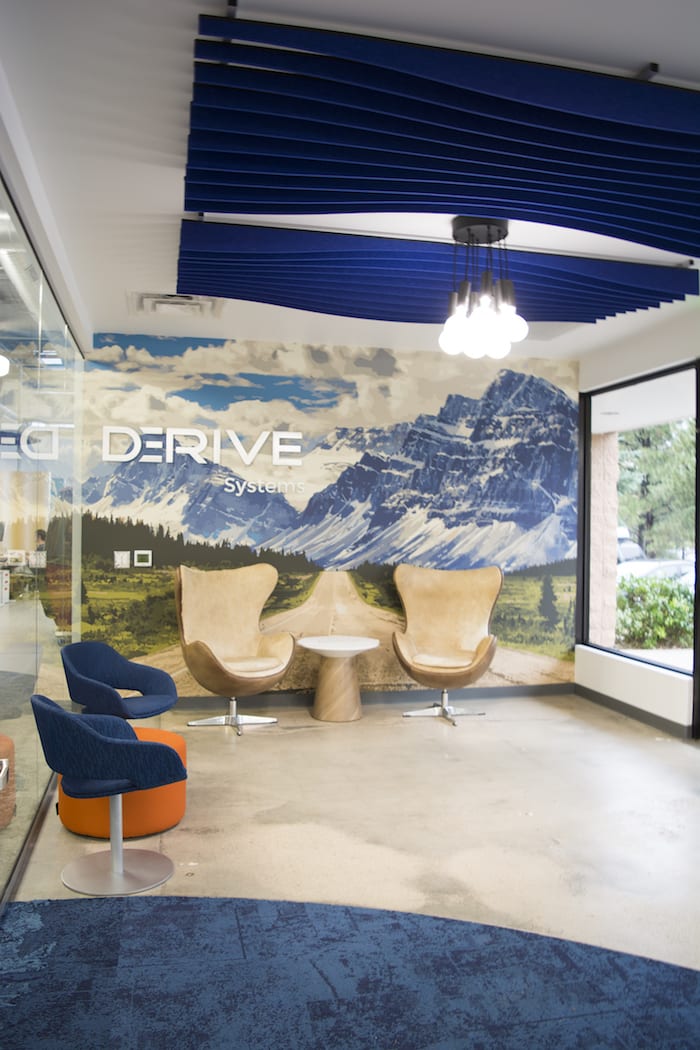 Even though the reception area is small, it is mighty. The custom created vinyl wall graphic showcasing road leading to jagged, challenging peaks immediately lets visitors and employees alike know that Derive is moving forward and engineering a bold future. Courtesy Angela Harness

In the Denver-Boulder tech corridor, technology-driven companies such as Derive Systems are taking over. Derive Systems, a company with multiple offices already across the United States, creates intelligent, customized driving experiences by working to advance car enhancement software. Not only was Derive able to find the ideal location to try out their creative endeavors, but also it allows them to attract talented engineers from both cities and the surrounding areas. 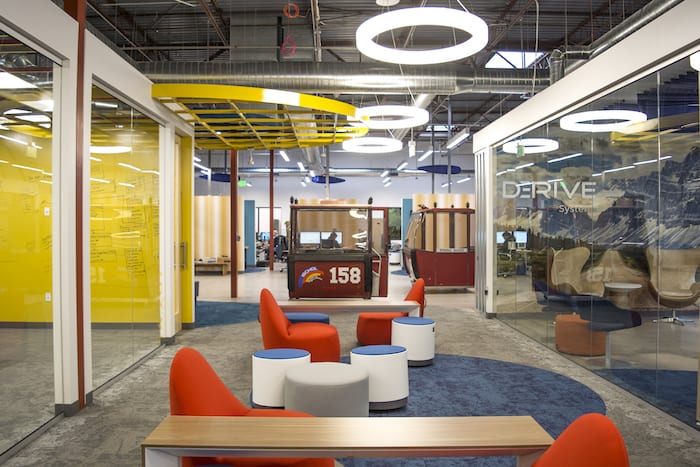 The leaders of Derive wanted a design that appealed to the most creative engineers in the Colorado area, as recruiting and retention are very important to company growth. Three red gondolas were brought in from Austria to act as small, movable huddle rooms.

Derive Systems was seeking to create a dynamic, eclectic and creatively rebranded office for their new location. They wanted to depart from their corporate standards in order to achieve a start-up environment that would make visitors and employees alike feel that they were headed in a new, big and bold direction as a company. The overarching design concept stems from cars (as it should). Particularly, the flowing and organic curves that are often thought of for the bodies of sports cars. The design focuses on using primary colors of red, blue and yellow to further solidify the concept, but the introduction of teal in many areas helps it depart from the elementary. The organic body concept is carried through the flooring transitions, open ceiling drops, large-scale graphics and materials.

While the materials within the space are sometimes hard and cold like that of a vehicle exterior, we also added in soft and highly textured materials that relate to a car interior. For example, the main floor area is sealed concrete, and one of the focal elements is the use of open, galvanized metal studs instead of gypsum walls. This allows for division of space without creating a barrier. In contrast, reclaimed wood working bar tops and furniture, and visible texture changes to carpet soften the space and bring a more luxurious feel. 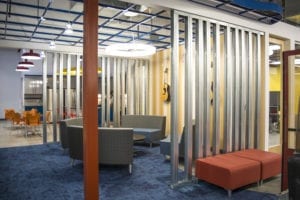 It was important for the design of the office that no space felt separated from the rest. Using open colored grid brought the ceiling level down in meeting areas, while exposed metal studs created a space barrier, but allowed for visual presence and connection.

Collaboration spaces meant for different tasks are central to the design, leaving plenty of room for rotating employees coming from other states to visit or work. Derive’s office space was designed not only to showcase the creativity of the talent that works there, but also to accommodate future growth. Instead of traditional companies with mainly private offices and a small amount of collaboration space, the floor plan is nearly 75 percent collaborative space. Not only does this accommodate their current needs, but also it makes it possible for revolving employees from out of state to find a comfortable space to work and for new employees to stake a space of their own on the open floor, a quality that makes Derive Systems different from many other technology-based companies looking to stake a claim.