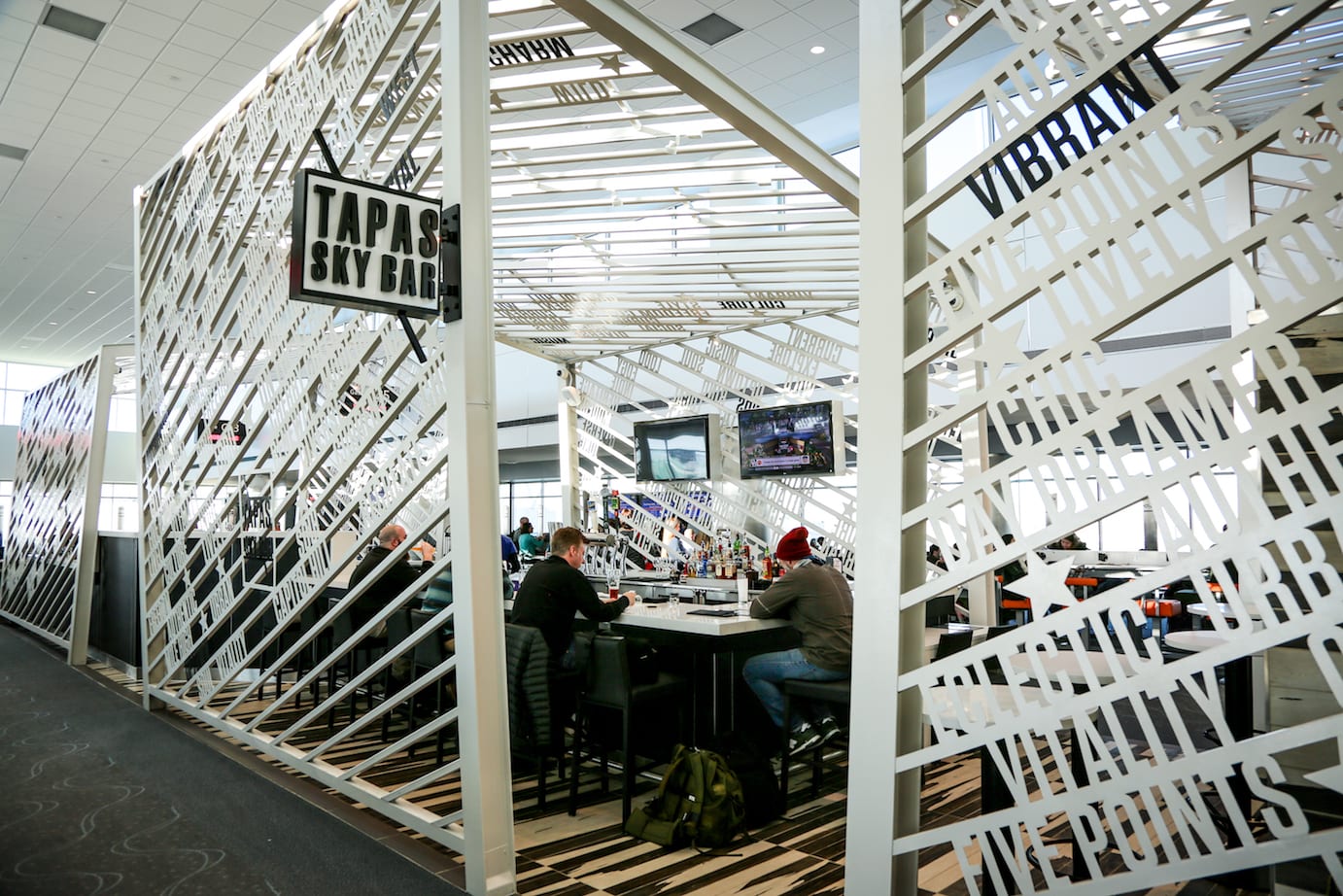 The Tapas Sky Bar, located in the C Concourse, opened in December 2015 and caters to travelers with a selection of wine, craft cocktails and 12 Colorado craft beers as well as a light fare menu. Courtesy Denver International Airport

The Denver International Airport’s concessions scene – including its food, beverage, retail and entertainment operators – is evolving to accommodate more visitors and changing consumer habits. In the immediate future, travelers should expect to see tenant changes in existing space as leases expire and new tenants move in, and they can expect to see their retail options increase exponentially in the next three to four years, as all three concourses open expansions and the Great Hall project finishes.

Like any retail business, with success comes growing pains and challenges with existing space. These next few years – as have been the past few – will be about accommodating that growth, said Patrick Heck, DIA’s chief commercial officer and executive vice president.

At the moment, most of the lease announcements are the result of turnover from previous operators, including some expiring agreements that date back to the airport opening in 1995. The new concepts will offer a “refreshed” experience, Heck said. For example, on the B Mezzanine, Woody Creek Bakery and Wolfgang Puck will close and Snooze, Shake Shack and Hacienda Colorado will open. However, when the Great Hall project is completed and the concourse expansions open, there will be quite a bit of new space.

“I’m going to guess in the neighborhood of 80,000 to 100,000 square feet that’s all new space,” Heck said. “So, for the next three or four years, it’s going to be a fairly hefty combination of both new space and turnover of existing space.”

According to Heck, the retail real estate at DIA has three goals:

• Meet the specific needs of travelers,

• Surprise and delight travelers with unexpected or unique options, and

Meeting the specific needs of travelers differs across the globe. In general, the most successful airports have a strong understanding of who their consumers are. For example, some of the most successful Asian airports focus on high-end retail, while some of Europe’s busiest airports dedicate a great deal of space to duty free. The common denominator among these airports is that they each do a great job of meeting their customers’ needs and wants. With that goal in mind, almost 70 percent of DIA’s concessions square footage is dedicated to food and beverage – because that’s what U.S. customers have responded well to, Heck said.

“We want our airport to reflect the region it serves,” he said. So, there’s an emphasis of Colorado- and Denver based restaurants, everything from Root Down and Elway’s to Smashburger and Snooze. “It gives us a way to showcase our region” and hopefully entice those connecting here to plan a future trip to Colorado, he said.

In addition to local restauranteurs, the airport likes local businesses that may operate a national brand, such as a Chick-fil-A or McDonalds. With millions of passengers coming through the airport, a varied mix is important. “What we’ve found is that there’s plenty of demand for all different types of offerings,” he said.

The tenant mix within each concourse is nuanced. Concourse A hosts the airport’s international flights (aside from United Airlines and Southwest Airlines), catering to an international traveler profile with a large square footage devoted to duty-free retail. Concourse B, which is all United Airlines flights, sees a higher percent of its customers connecting – making grab-and-go concepts crucial – while Southwest’s C Concourse focuses on yet another business model and different kind of customer, Heck said.

The airport handles all of its leasing and management for the concourses internally, working directly with the operators. Like all retail real estate managers, curating a blend of unique, memorable and balanced options is vital to the repositioning of space. The tenant curation is done through a combination of operators soliciting the airport and DIA seeking out particular operators that it thinks would do well.

All of DIA’s spaces go out to the public in a request for proposal. After the RFP process, the airport negotiates a contract, which then goes through a City Council process – read at a committee, approved by the Council and signed by the mayor – before it is officially executed. From announcement of the RFP to Council approval, the whole process can take close to a year – and then the build-out starts.

Leases are done on a percentage rent basis, with a minimum guarantee, and then a percentage rent, which varies from the low-teens to more than 20 percent, Heck said. The terms typically are five, seven or 10 years, depending on the scope of the project and amount of capital investment expected. DIA does not offer any tenant improvement budget, requiring the concessionaire to put in the capital.

Last August, the Great Hall project was approved by Denver City Council. The public-private partnership will repurpose levels five and six of the Jeppesen Terminal, including the current ticket counters as well as the open space under the iconic tented canopy. Moving, enhancing and consolidating the security checkpoints will allow the airport to “recapture the original spirit of the terminal as a relaxing and vibrant experience, via new shops and restaurants, enhanced flight information displays, children’s play areas, relaxing seating and more,” a DIA press release stated.

The renovation will create 63,000 sf of space for 50 commercial operators, according to Great Hall Partners, the development partner. By repurposing the space, the airport will get more capacity out of the Great Hall, which was built and designed for 50 million passengers a year – far below the more than 60 million passengers who started or stopped trips here in the past year.

“This project is going to help give us the right level of capacity so that we can get well north of where we are today in terms of growth,” Heck said.

Great Hall Partners is led by Ferrovial Aeropuertos with Saunders Concessions and Magic Johnson Enterprises/Loop Capital. The terms of the deal call for four years of design and construction followed by 30 years of operations and maintenance.

“We get 80 percent, and they get 20 percent,” Heck said. “In doing that, it gives us both skin in the game to make sure it’s offering what our customers actually need.”

In April, Great Hall Partners released the first 10 RFPs for Great Hall concessionaires. Unlike the tenant makeup in the courses, the retail development will be more evenly balanced – as of now, it’s expected to be about 40 to 45 percent food and beverage and the rest retail operators, Heck said.

The team hopes the space will inspire “a new type of airport retailing, one that’s driven by the call to entrepreneurship and the spirit of the New American West,” Castejon said. “These ambitions reflect the attitudes and interests of the people whom this terminal will serve: a fast-growing population that is smart, well-educated and adventurous, many of whom are frequent fliers with long dwell time and have high disposable income.”

All the tenants currently in the Great Hall are on holdover month-to-month agreements. These leases will terminate, and the operators can rebid on spaces in the area through the RFP process.

All this building and repurposing means there’s a lot of upcoming opportunities for commercial real estate professionals at DIA. “We really welcome input and feedback from any of your readers who might be interested in doing work at the airport,” Heck said.

“We would love to hear from them.” 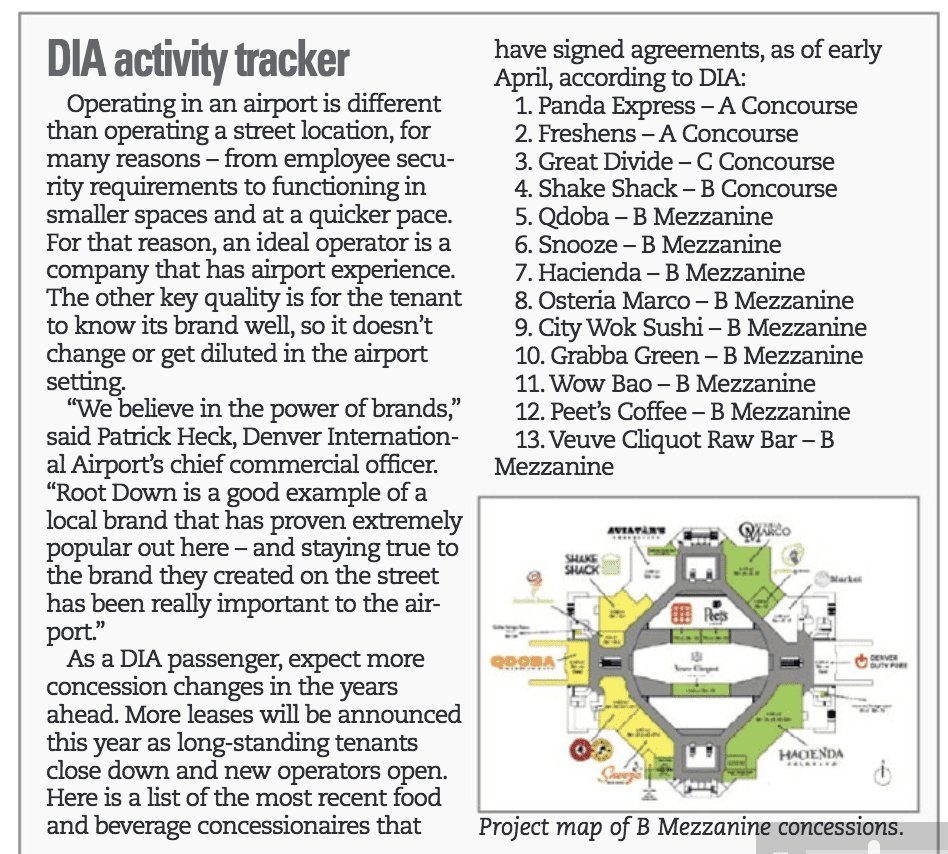