Ent Center for the Arts: Collision of Performing Arts, Community and Academia

Ent Center for the Arts

Driving north out of Colorado Springs, the mountains have competition. The sleek glimmer of metal panels and eye-catching curves of the Ent Center nearly demand your attention. The building’s exterior is a showpiece, it too has competition – the interior. 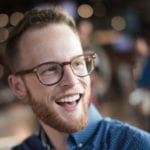 In its first year, the performance center really performed: “There is nothing like the Ent Center for the Arts in our region,” said Drew Martorella, executive director for UCCS Presents. “This building was not only going to showcase the arts and make arts central to the campus, but what we also thought would be true – and has proven since it was opened – is that the building would serve an immediate need that the community had for performance spaces, which hadn’t existed in the city previously.”

Since its opening in January 2018, the Ent Center for the Arts has hosted more than 1,500 events. One-third of them performances that drew more than 180,000 visitors in its first year.

The University of Colorado Colorado Springs didn’t go it alone. The college partnered with regional and cultural organizations that otherwise may have struggled to fill the seats or raise the funds to rent the Pikes Peak Center. They wanted to host quality programming in an exceptional acoustic performance space, too.

“A lot of local performing arts nonprofits were hosting their programs in churches and high schools,” Martorella said.

“The Ent Center has allowed them to have a first-class performing arts facility that is scaled to their needs.

“This has enabled them to up their game.” 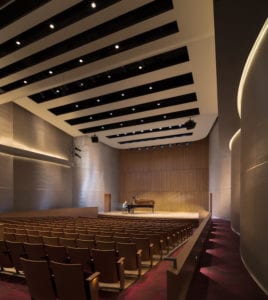 The Ent Center also has supported the delivery of neighboring developments, including an adjacent shopping center with restaurants and retail stores to accommodate increasing area demand. In the last year, UCCS has opened an athletics complex to the north of the Ent Center and recently broke ground on the William J. Hybl Sports Medicine Performance Center.

The seed of this dream was planted by TheaterWorks founder Murray Ross in 1975 when he joined the UCCS team to teach English and run the theater program. The previous facility was simply an unused classroom without proper lighting or technology and inadequate acoustics.

Now, the Visual and Performing Arts program at UCCS has a state-of-the-art facility that includes a black-box theater that was modeled after the Dorfman Theater in London. It contains supporting spaces for the Academic Theater and Dance Departments. A 250-seat recital hall is a nod to the Music Department with its impeccable acoustics that can complement a quartet or a full orchestra. And there’s the 786-seat flexible performance space/theater and the Gallery of Contemporary Art with its museum-quality humidity control.

“There is not another program in the state with a similar facility,” said Jared Verner, director of communications at UCCS. “The recital hall is one of the most acoustically perfect venues in the Rocky Mountain Region, and the space was built to be very versatile.

“There is no other place in Colorado Springs that has that number of venues in that concentrated of an area. On average, during the academic year there are 15 to 20 events at the Ent Center each week. 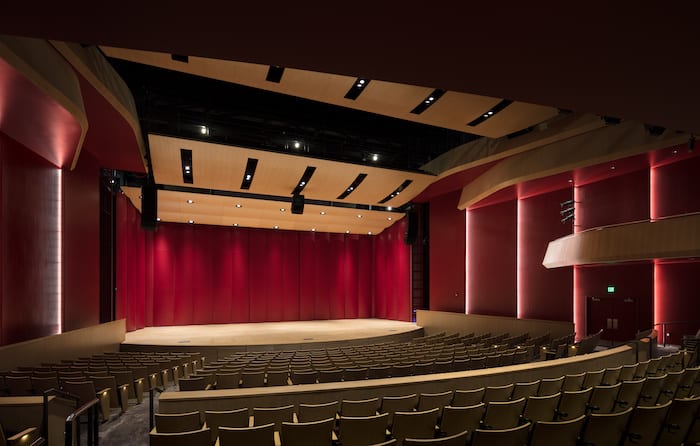 While it’s too soon to see the full impact, the Ent Center for the Arts already has surpassed expectations for the UCCS campus, the Visual and Performing Arts program, and the Colorado Springs community.

Its presence on campus not only has served as a stunning visual statement, but it has nudged the growth of other UCCS programs that were able to reclaim old classrooms and other spaces.

“The Ent Center for the Arts has had a domino effect on our campus,” Verner said. “Education and Chemistry programs have been able to expand and offer more to our students. We’ve added labs, offices and classrooms.

“Our students are ecstatic to have the space to thrive.”

And JE Dunn, the construction manager and general contractor for the project, shares the enthusiasm, having accomplished its goal of building perfection.

“The Ent Center for the Arts was a tremendous opportunity for me to work on a performing arts center in my own backyard. The number of performing arts events that have taken place in our community has greatly increased which has been a tremendous benefit to UCCS and the Colorado Springs community,” said Matt Vineyard, senior project manager, JE Dunn Construction.