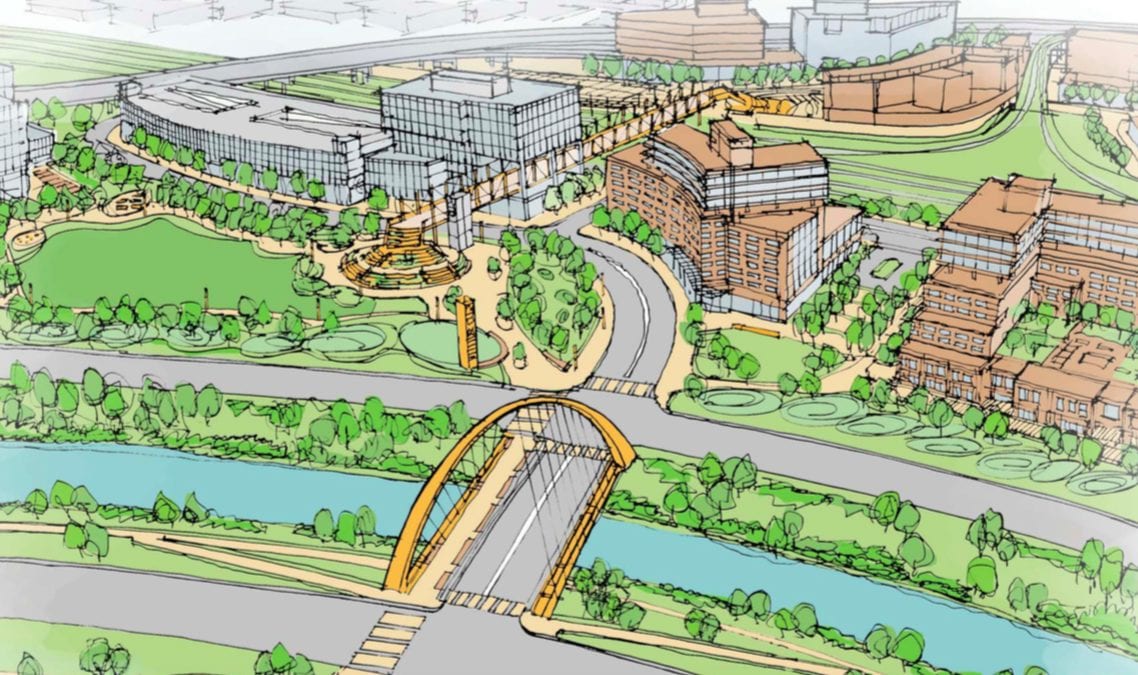 Broadway Station, the 41-acre property near Santa Fe Drive and Interstate 25 in Denver, will go to market later this year.

The long-awaited redevelopment of the former Gates Rubber Plant is coming to fruition.

Broadway Station, the 41-acre property near Santa Fe Drive and Interstate 25 in Denver, will go to market later this year and potentially bring the development of roughly 2,600 residential units, a million square feet of office product and several hundred thousand sf of retail space as well as return one of Denver’s largest infill sites to productive use.

But the road to reach the ready-for-development milestone was far from easy.

Gates Rubber Co. operated at the site, separated by the Broadway lightrail station and comprising three land parcels, a 15.2-acre parcel between the I-25 and Broadway light-rail station and Mississippi Avenue, along the west side of Broadway; a 24-acre site between I-25 and Mississippi along the east side of Santa Fe; and 2.5 acres between Tennessee and Vanderbilt Park along the west side of Santa Fe, from approximately 1937 through 1991.

Cherokee Denver purchased the three parcels in 2001 and implemented a portion of the on-site demolition and environmental cleanup. However, the economic downturn stalled development and Gates Corp. reacquired the property in 2009 and continued the remediation efforts, including demolishing remaining onsite structures, cleaning up groundwater and installing groundwater remediation systems.

In 2014, brownfield redevelopment company Frontier Renewal purchased the property. Since the acquisition, Broadway Station Partners, of which Frontier Renewal is a part, has been working on the environmental cleanup of the site and preparing it for development.

“I think bringing this back into productive use is important for everyone,” Lisa Duker-Ingle, development project manager for Broadway Station, said of the project that will not only fill a “doughnut hole” of development in the city but also provide connectivity lacking in the community.

“It will reconnect the city from east to west,” noted Duker-Ingle, citing the series of bridges that will run over the train tracks and the South Platte River, for example. “It’s a project that is reknitting the fabric of this city, opening up traffic and which is going to be powerfully impactful.”

“Denver doesn’t have that many remaining large infill sites so, with that in mind, being able to reclaim this property that for a very long period of time served a very, very important purpose but then for a very long time has also sat there undeveloped and lacking in realizing its potential is exciting,” said Denver Urban Redevelopment Authority Executive Director Tracy Huggins.

“We’re thrilled about the potential of actually being able to have it be brought back into productive and active reuse,” added Huggins. “With Denver just having not very many of these opportunities, to be able to see this one is very exciting for Denver and for that immediate collection of neighborhoods.”

Additionally, Broadway Station’s location at a convergence of a number of light-rail lines as well as vehicular arterials and the opportunity for housing and commercial development is a unique opportunity in Denver, said Huggins.

Yet it is this location – an “island” not really connected to the surrounding areas – that is going to require a significant amount of infrastructure in order to allow the development vision to come forward, she emphasized.

DURA is working with the developer, the city of Denver and the Regional Transportation District to use tax-increment financing to support the payment of the “extraordinary” infrastructure costs.

“Urban renewal has been under attack in a number of surrounding communities and I think this site is really a clear indication of the importance of retaining the role of urban renewal authorities and the use of tax-increment financing,” said Huggins. “Here is a site that arguably would be a prime redevelopment with all those positive attributes I mentioned earlier, yet it has sat undeveloped through both strong and not-so-strong economic cycles. There are clearly limitations to the ability to redevelop this property that absent tools like tax-increment financing, it would likely continue to sit just as it is and certainly not be able to achieve the vision the city and the community want to achieve on that site.”

In addition to creating a dense, urban environment and connectivity within the neighborhood and city, Broadway Station also is designed to reconnect with the past, protect view corridors, have an adaptable framework for future conditions and develop a variety of exterior public realm spaces.

In June, Broadway Station Partners finalized the zoning application as well as urban design standards and guidelines. It also is working with DURA on the finance package, which it hopes to have approved through City Council in the first quarter of 2017, after which time infrastructure can start with vertical development to follow, noted Duker-Ingle.

Broadway Station Partners is acting as horizontal developer of the site and it will subdivide and plat the property and sell parcels for vertical development.

Featured in the October 2016 issue of Land & Development Quarterly