Hyder Construction breaks ground on The Hooper in Five Points 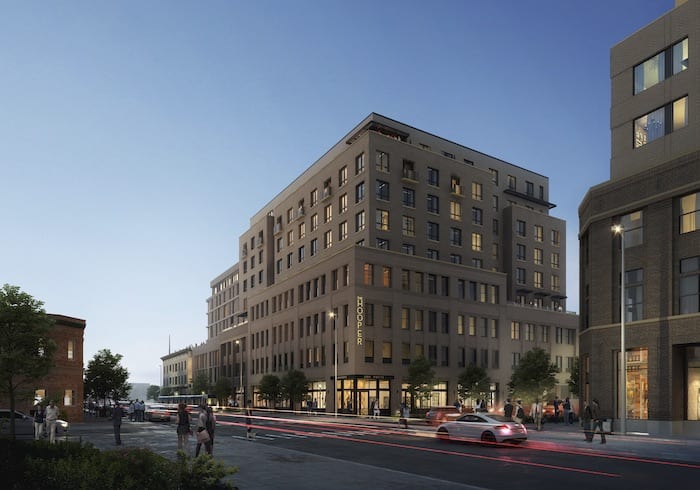 The Hooper will include 33,000 square feet of Class A office space as well as approximately 6,400 sf of ground-floor retail space, planned for community gathering place Busboys and Poets.

Palisade Partners is developing the project, which is adjacent to the Rossonian Hotel.

“Five Points has a rich history of community partnership and entrepreneurship that is attracting businesses and residents who want to be part of something greater than themselves,” said Paul Books, president and founder of Palisade Partners. “Every detail of The Hooper is meant to foster a sense of community and ownership within Five Points, empowering this neighborhood to build upon its diverse and inclusive culture.”

The Hooper will include 33,000 square feet of Class A office space with one level each of above- and below-grade parking, as well as approximately 6,400 sf of ground-floor retail space, planned for community gathering place Busboys and Poets. Founded by owner Andy Shallal, this will be the restaurant’s first location outside of Washington, D.C.

“We don’t parachute into communities,” Shallal said at the groundbreaking. “We work with [all parties] for social success.”

According to the its website, “Busboys and Poets is a community where racial and cultural connections are consciously uplifted … a place to take a deliberate pause and feed your mind, body and soul … a space for art, culture and politics to intentionally collide … we believe that by creating such a space we can inspire social change and begin to transform our community and the world.”

Designed by Craine Architecture, The Hooper will also include 103 apartment homes – including 78 micro-units ranging in size from 350 to 500 sf – with two- and three-bedroom options on the top two floors. The Hooper features an on-site fitness center, resident lounge, community kitchen, large and small storage spaces, golf simulator and top-floor lounge with city views.

“The Hooper was designed in response to the context of the Five Points Historic Cultural District, said Dan Craine, AIA. “The building’s  strong, familiar brick masonry base is designed to enhance the public realm with a highly transparent, active ground floor retail use.”

In addition, the upper levels of the base were designed in response to the masonry façade patterning of the district, he said. Above the three- and four-story base, the building steps back in deference to the scale of the historic commercial corridor.

Brick masonry, various scaling elements, and historically proportioned punched window openings are used to promote a mature, timeless design that adds to the existing fabric of the historic corridor.

In partnership with Five Points Development Corp. and Impact Empowerment, Palisade Partners is hiring members of the Five Points community for skilled and unskilled trade opportunities for The Hooper, providing training and mentorship to benefit workers and their families.

Slated to open in 2021, The Hooper is named for Benny Hooper, a prominent Five Points businessman who opened the Ex-Servicemen’s Club at 2626 Welton St. in the 1920s. Known for his unwavering commitment to the Five Points community and love for jazz, Hooper also founded the Casino Cabaret – now home to Cervantes’ Masterpiece.

“What is going to happen on Welton Street?” asked District 9 City Councilman Albus Brooks. “Inclusive development, minority- and women-owned businesses – everyone is at the table.”

Palisade Partners’ other Five Points projects, also designed by Craine Architecture, include The Wheatley, an 82-unit apartment community with 14 townhomes and 3,800 sf of ground-floor retail space, The Lydian, an eight-story, mixed-use transit-oriented development at 26th and Welton Streets, the Brownstones at King Stroud Court which includes 26 for-sale townhomes, and the restoration of The Rossonian Hotel.