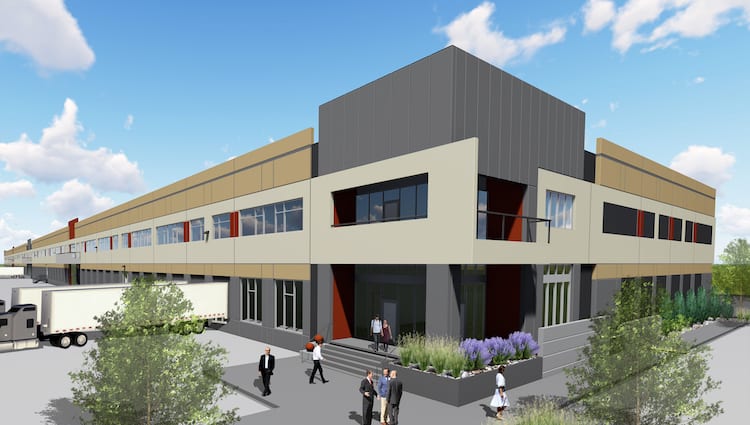 Buildings at JAG Logistics Center at DIA will have mezzanine offices with elevator access. Each building will have its own exterior accent color.

A company that’s developed industrial product next to some of the nation’s busiest airports has landed in Denver.

Greenwich, Connecticut based J.A. Green Development Corp. will kick off the first, approximately 1 million square-foot phase of JAG Logistics Center at DIA in the first quarter. Located on 75 acres in the Porteos development, it will be followed by a second phase on 172 acres the company has in escrow.

Targeted to freight forwarders – which handle shipment of products from the manufacturer to the market – the buildings also can accommodate a broad range of industrial uses. Because they’re column-free, they can be divided for small users.

“We see a marriage of third-party logistics and freight-forwarding uses coming together on this site,” said Alec Rhodes, managing director at Cushman & Wakefield. “This building provides function, flexibility, demising all the way down to 5,000 square feet, so we believe we’ll garner attention from smaller users as well as freight-forwarding companies.”

The first phase of JAG Logistics Center will be developed on a speculative basis, starting with a 188,000-sf building called Trade 1.

“The buildings are designed to move freight more efficiently than anything else in the marketplace,” said Green. The cross-dock design includes a mezzanine level with ample office space so as not to interfere with product movement. The mezzanines have elevator access, and balconies are spread throughout the buildings.

The development will “overemphasize” truck courts and trailer parking, Green added. “We want to make this a real 21st century industrial facility to accommodate all the needs of the coming years where you have driverless trucks and cars.”

“We have the closest privately owned site to the airport. Nobody’s ever going to be closer than where we are,” commented Valdez.

Company and Denver International Airport officials are discussing a possible tug road between the development and DIA, said Green.

J.A. Green Development was founded by Green’s grandfather in 1941 and began developing industrial buildings next to what now is John F. Kennedy International Airport 50 years ago. It has developed well over 4 million sf of industrial space next to airports in Dallas-Fort Worth, Houston and Seattle.

Having fine-tuned the product over multiple years and locations, “We anticipate we’ll have really good leasing success as we start construction,” said Green.

With population and online sales growth increasing demand for industrial space, the second phase of JAG Logistics Center at DIA will be aimed at 500,000- to 1 million-sf build-to-suits for e-commerce-type users. “But if the other side of our business takes off and we see a need for the sub-100,000-sf market, we’ll do more of those,” Green said.

“I think that’s a market that is greatly underserved not only in Denver but around the country. The larger developers really don’t want that type of business, or if they get a 50,000-sf tenant, that tenant sort of gets what’s left over in their buildings. Our buildings are specifically designed to cater to that market, and we’ve always done really well.”

Intergroup Architects is the architect for the industrial park. J.A. Green is the general contractor.

An air cargo facility was built at DIA in the early 2000s but stalled for several years due to the recession and 9/11. But industrial specialists say Denver is a different city today.

“When the airport opened up 25 years ago, it was way the heck out in the middle of nowhere, and people sort of laughed at it. I don’t think anybody’s laughing anymore because it’s a lot closer to where everybody’s living, and you have more and more houses being built,” said Green.

“The success of this project cannot be measured inside of three years. We always look at real estate as long-term investment, and for us the window is 10 to 20 years. In 10 years’ time, I think – I hope – I will look very smart by going into it now, but there are a lot of people who think we’re pioneering and we’re a little bit crazy.

“I feel very confident that by the time we’re said and done in 10 years’ time, the landscape will look dramatically different in that area,” Green said.