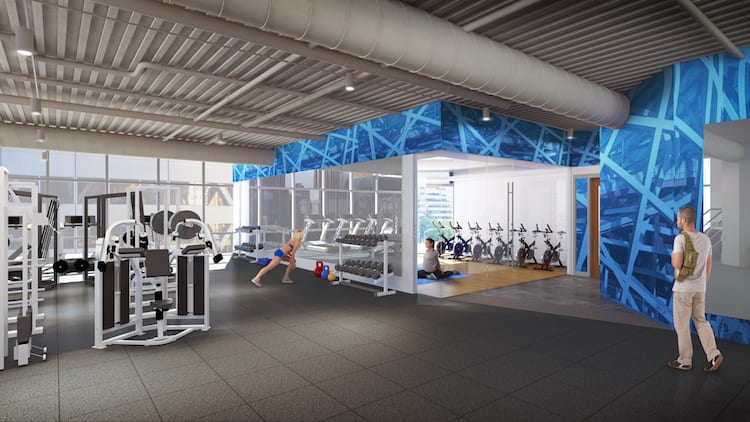 Renovations at Granite Tower will include a new fitness facility.

KBS signed 384,716 square feet of leases at Granite Tower in the fourth quarter and is set to begin a $10.5 million renovation of the building this spring.

The largest transaction was a 12-year, 295,743-square-foot lease extension with Anadarko Petroleum Corp. The lease was the largest to be signed in Denver in 2018, according to KBS. Jim Bailey and Nick Pavlokovich of Cushman & Wakefield represented Anadarko in the transaction.

“The commitment by KBS to make significant improvements and bring market-responsive amenities to the building were very important considerations made by Anadarko in their decision to remain at Granite Tower,” said Bailey.

Granite Tower is one of nine remaining properties in the KBS REIT II portfolio.

KBS was able to consolidate Personal Capital from Granite Tower’s third floor and a nearby building into two floors with interconnected stairways, providing the tenant with significant savings on rent and operating costs, the company said. Bankers’ Bank of the West also renewed and expanded its lease.

Renovations at Granite Tower will begin in May and be completed in the first quarter of 2020. A highlight will be a new amenity floor that will span the entire third level of the building. It will feature an open lounge and outdoor deck overlooking downtown. Tenants also will be able to host formal meetings for up to 138 people in a new conference facility and take advantage of a new gym with group workout classes, Peloton bikes and locker rooms.

The renovation also will include a “bright and transparent” architectural pavilion that will expand the main lobby and ground-floor common area, supporting a new food and beverage operation extending to the upgraded outdoor gathering space. There also will be a new 100-bicycle storage facility next to the expanded lobby with easy access to building elevators.

“KBS’ overall strategy has been to acquire high-quality office assets that are well located, then implement aggressive renovations to properly compete with significant developments occurring across the country,” said Rodney Richerson, western regional president. “Our thoughtful and forward-thinking renovations at Granite Tower have proven key to attracting and retaining premier tenants at the property. We look forward to fostering long-term relationships with our new and existing tenants while continuously working to meet their changing needs.”

Representing KBS in the recent lease transactions were Andy Ross and Jamie Roupp of JLL, along with Nathan Johnson and Pete Staab of Newmark Knight Frank.