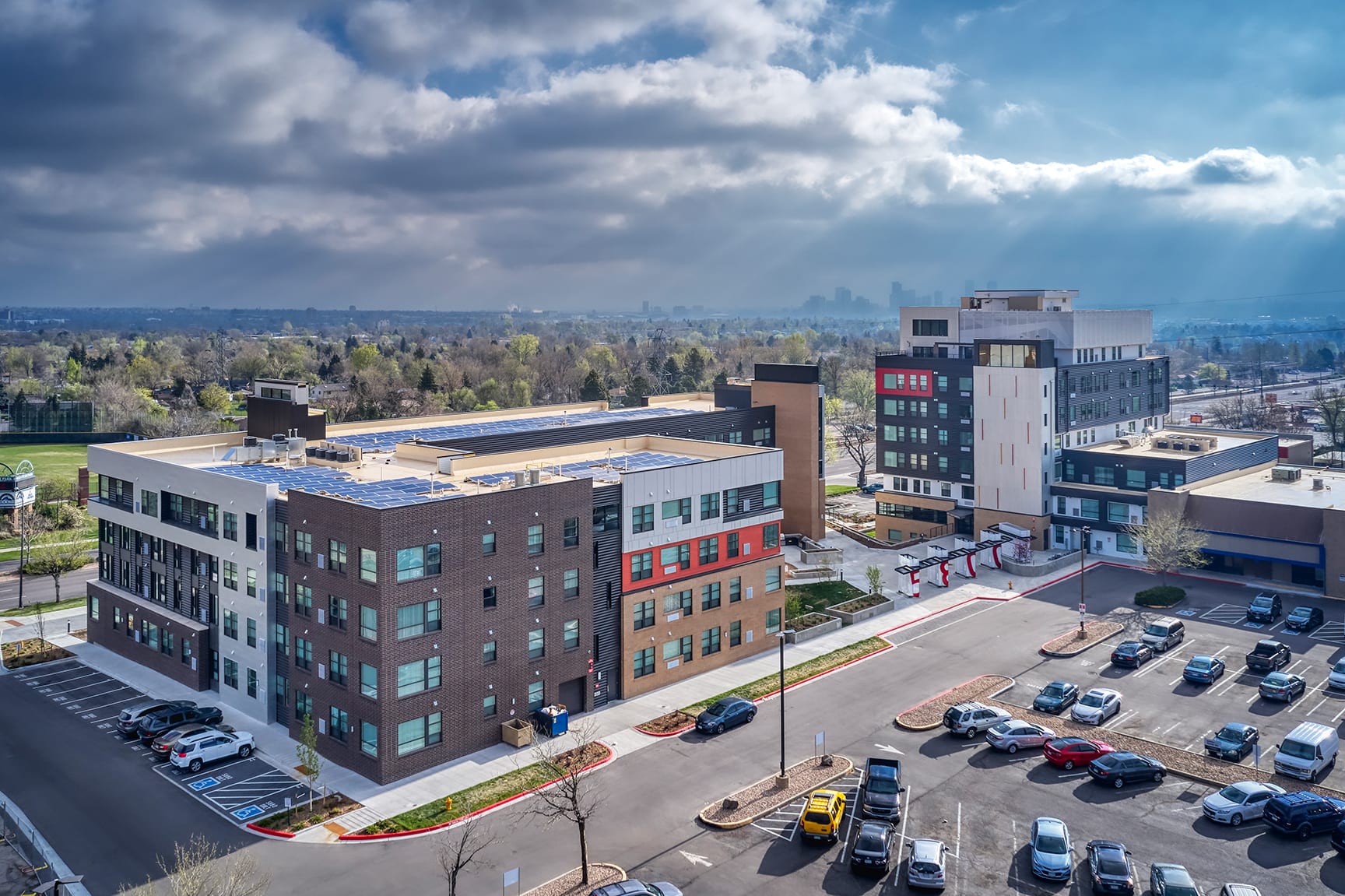 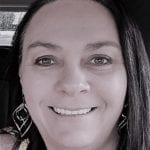 “I am not sure there is any greater impact on a community and on personal lives than taking a blighted, contaminated, vacant, unattractive building and turning it into a vibrant, beautiful space that meets one of the greatest challenges our community, our state, is facing – affordable housing,” Tami Fischer, executive director of Metro West Housing Solutions, proudly declared when asked about the community impact of this affordable housing development. “We took the ‘ugliest building’ in Lakewood and turned it into safe, classy and permanently affordable housing community!”

You can see, hear and feel the excitement and pride of the MWHS staff when discussing and showing off Fifty Eight Hundred.

Fifty Eight Hundred, located logically enough at 5800 W. Alameda Ave. in Lakewood, is the end product of the transformation of a vacant, blighted office tower and former retail strip mall into 152 affordable housing family units. Fifty Eight Hundred is a community with amazing views, walkable shopping nearby, close bus lines and art installations throughout the buildings. Near Lakewood’s Belmar shopping and entertainment district, it is home to studios, one-, two- and three-bedroom apartments serving individuals and families from 30% area median income to 60% AMI.

This project provided a unique challenge for MWHS as it overcame unexpected problems, not having done an adaptive reuse project before. Imagine doing an adaptive reuse project on a building that had sat empty for over 30 years. During that time, many developers with deeper pockets and experience in reuse projects had considered and passed on this site.    MWHS was concerned and had thoughts of, “If they couldn’t do it, how can we?” After walking to the rooftop of the vacant, grey concrete office tower and seeing the amazing 360-degree views, the team overcame their doubts and went to work to make this project a reality. They saw how the transformation of this long-empty building surrounded by a sea of asphalt into a thriving family community could contribute to the economic development of the area and the city of Lakewood.

As an adaptive reuse project, Fifty Eight Hundred is a testament to innovation and community revitalization. The transformation of an abandoned office tower into family apartments meant design and construction teams had to get creative with structural components – like the nonremovable rebar tendons throughout the building – and budget concerns that would appear when surprises lurked behind demolished walls. In addition to the structural surprises – they had to use ground-penetrating radar to find the rebar imbedded in the concrete columns – MWHS had to overcome environmental issues due to a previous dry cleaner and the massive amounts of pigeon droppings that had accumulated over the decades (it cost $13,000 just to remove it).

Other challenges included financing with many partners, getting through the city of Lakewood approval process (that took nearly a year), and all the legalities surrounding multiple landowners and tenants in other portions of the strip mall (over 20 easements were necessary during the project). Due to city of Lakewood zoning ordinances, there likely never will be the opportunity to build a seven-story building again. 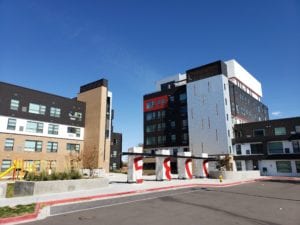 Community support for the project was high because people were excited
something was finally happening to a building that had been vacant for over 30 years.

One aspect of the existing development that made the project feasible was the existence of an underground parking structure that was a big cost savings and allowed the project to move forward.

Fifty Eight Hundred incorporates many energy-efficiency design elements, including solar panels on the roof that generate 25% of the energy for the building, energy-efficient appliances, insulation, windows and all LED lighting.

The full-time, on-site resident services coordinator makes a big difference in the lives of the residents at Fifty Eight Hundred. The coordinator helps locate resident resources such as food, clothing and rental assistance, and helps residents with resume writing and job searching as well as coordinates on-site activities and classes. A mental health caseworker from the Jefferson Center for Mental Health visits the building several times a month.

One of the biggest surprises of the project was the support of the community; there was no NIMBY pushback. The community and neighbors were excited that someone was finally going to do something to the building and site. Being popular was a new, fun and very welcome change that may not be experienced again. Even today, months after the grand opening, MWHS receives random calls from neighbors just to say “thank you” for making a difference.

MWHS, established in 1974, is a nonprofit affordable housing agency and property developer that owns and manages apartment communities in Lakewood and Denver, administers Housing Choice Vouchers to eligible Lakewood residents, and facilitates a wide range of resident services for clients. In addition to the 1,124 affordable and LIHTC units MWHS has acquired and developed, MWHS also manages 1,411 HCVs and has housed over 30,000 individuals and families.