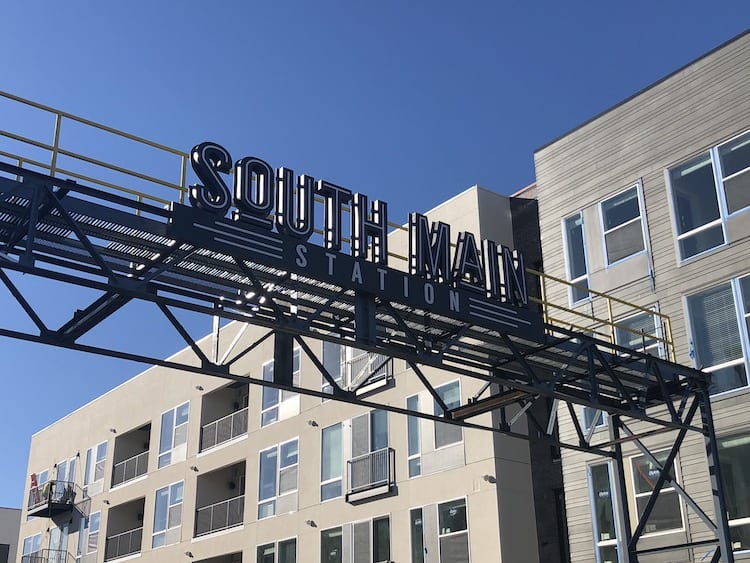 A portion of a truss that connected two facilities at the Butterball plant was salvaged to create signage at South Main Station.

South Main Station Apartments is opening its doors in downtown Longmont, building on significant investments – and paving the way for additional amenities – in that part of the city.

The 253-unit apartment community, with frontage on Main Street, is a major milestone for South Main Station, the redevelopment of the 26-acre former Butterball turkey plant. The “phenomenally successful” Wibby Brewing opened there four years ago, and developer Mass Equities now is moving ahead with plans for creative workspace, a food hall and a 60-unit apartment building. Future plans call for an additional 250 apartment units.

South Main Station extends west from Main Street to include all four corners of the intersection at Second and Emery streets. 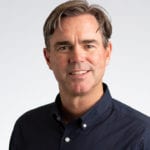 “I had a vision of creating a real community, a neighborhood,” said Mass Equities Principal Brian Bair, adding the mix of existing and planned uses takes a page out of what’s happening in Denver’s River North Art District, where the company also is active.

In Longmont, “There are not a lot of large tracts of land downtown. We were able to buy 7 acres on Main Street. That’s very rare,” he said.

“People are excited about the modernness,” said Community Manager Crystal Vrieze. “What we have has been very well-received.”

There are 35 studio, 161 one-bedroom and 57 two-bedroom units. Monthly rents range from $1,408 to $2,295, making the apartments more affordable than comparable product in nearby Boulder, according to Bair.

The location is about 1 ½ blocks from the 52-acre Dickens Farm Nature Area, situated along the St. Vrain River. The park includes a kayak/ tubing course, recreational trails and picnic areas. If and when commuter rail is extended to Longmont, the transit station will be located within a stone’s throw of South Main Station.

From an economic development standpoint, South Main Station is an important project because it provides the kind of product and environment that attracts millennial talent, with walkability to downtown and other amenities, said Jessica Erickson, president and CEO of the Longmont Economic Development Partnership.

“The No. 1 decision-making factor for where companies are investing and putting new facilities today is where they can get access to talent. So, the addition of an apartment and commercial development like South Main Station is helping our ability to attract that talent to our community,” Erickson said. 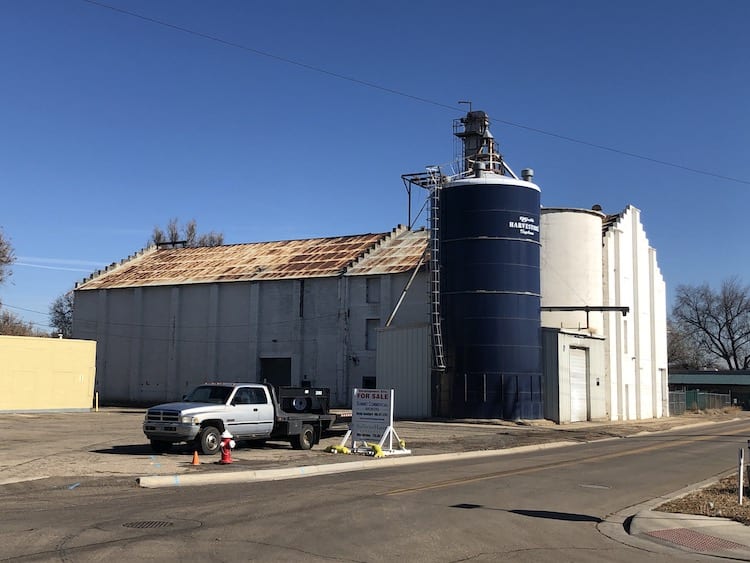 A former granary will be transformed into a food hall with office space above.

In addition to starting construction of the fifth and final, 60-unit apartment building in the first phase of South Main Station this year, Mass Equities will begin work on two adaptive reuse projects within the development. A 15,000-sf warehouse at 110 Emery St. will be transformed into retail/office space, some of which is preleased. Although he said he couldn’t yet release details, Bair said, “We’ll have some really cool concepts going in that building, which will be amenities for the neighborhood.” In addition, an early 1900s granary that predates the Butterball plant will be transformed into an 8,500-sf food hall with 12,000 sf of office space on the second and third floors. Located at Second and Emery, catty-corner from the new apartments, the granary operated as the Colorado Malt & Barley Plant until 1930, according to Erik Mason of the Loveland Museum.

With investments the developer, the city and others have made in the South Main Street area, the vision of a mixed-use community in place of the former Butterball plant is taking shape. “It could be a real destination, whereas before it was a place where people came to work,” Bair commented.