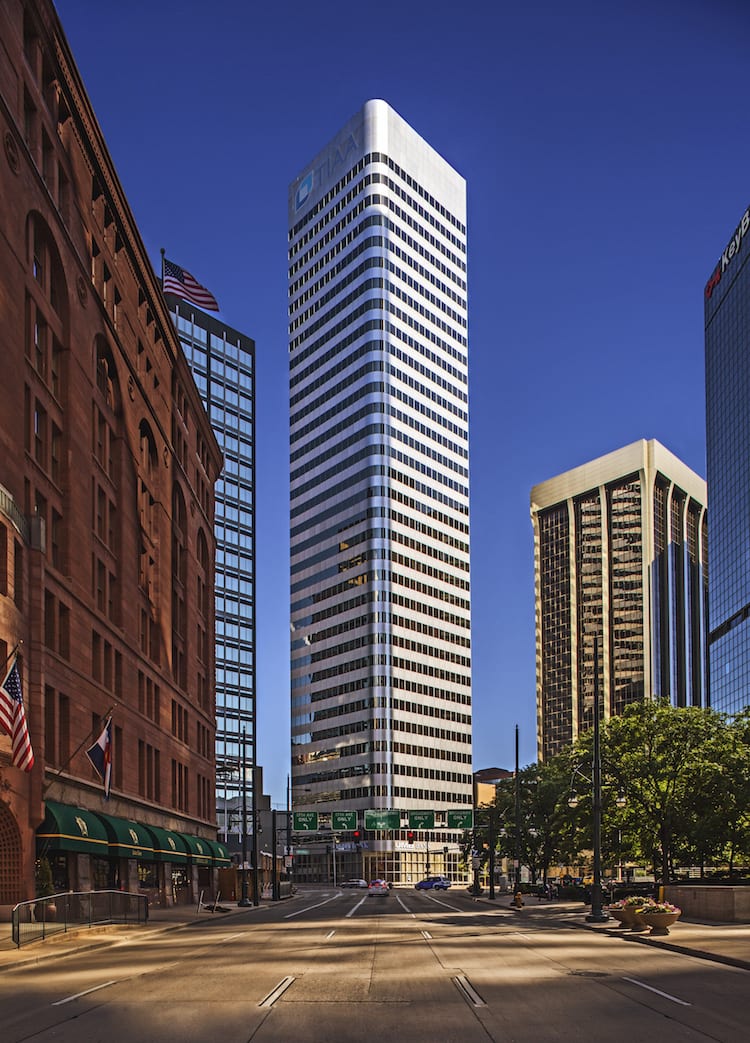 Home to TIAA, the building at 1670 Broadway sits at the convergence of Broadway and 17th Street. (Photo by Jim Havey, Havey Productions)

An offshore investor bought 1670 Broadway, an iconic office tower with some of the strongest credit tenancy in downtown Denver, for $238 million.

UBS recently completed a major redevelopment of the 36-story tower, adding a new four-story, 18,000-sf glass podium building that brings the square footage to 704,566. Located at the convergence of 17th Street and Broadway, 1670 Broadway is just off the upper end of the 16th Street mall.

“Having a rock-solid-credit tenant on a long-term lease anchoring your building was a huge reason people liked it,” said Knowlton. Also, “The redevelopment that UBS employed building that podium building off to the side … made the building have this really cool, edgy, modern feel to it,” she said.

TIAA is an AA credit tenant that occupies more than half of the building on an 11-plus-year lease. The U.S. Department of Housing and Urban Development occupies around 85,000 sf, and HDR Engineering has approximately 55,000 sf. TransMontaigne GP LLC and UMB Bank each lease about 44,000 sf.

In all, more than 80 percent of the space at 1670 Broadway is leased to tenants with A credit or better. Overall occupancy is 90 percent.

Constructed in 1980, the LEED Gold building has 360-degree city and mountain views, 22,000-sf floor plates, below-market rents and 519 structured parking spaces. The addition created a new entry and retail space, along with an outdoor deck.

The location provides walkable access to restaurants, shopping and Civic Center Station, along with the Free MallRide and MetroRide.