Opus breaks ground on The Glenn 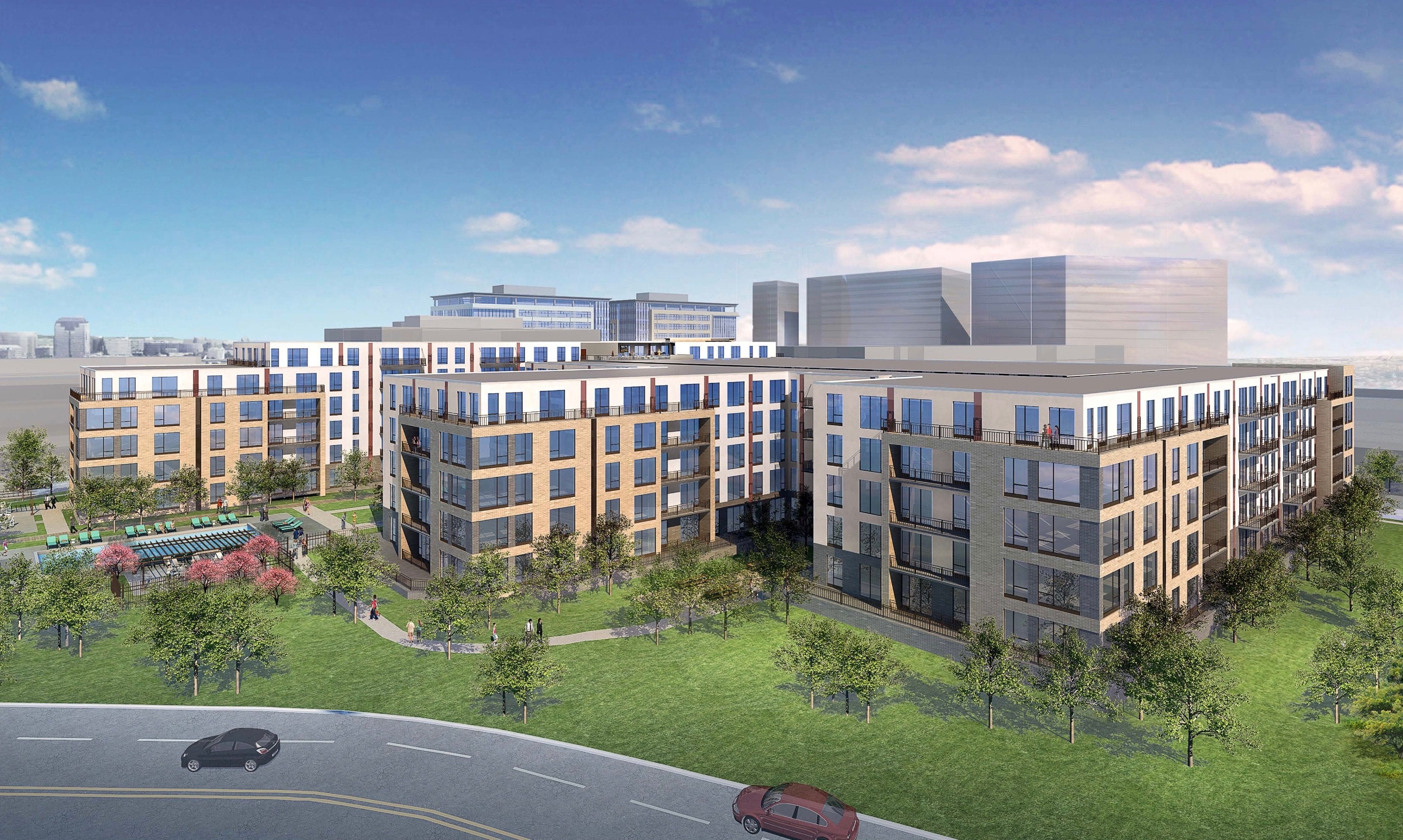 Opus has broken ground on The Glenn.

The Opus Group on Wednesday celebrated the construction of a 306-unit, Class A office community, the first project in the high-profile Jones District along Interstate 25 along the southeast corridor.

The Jones District, a transit-oriented development, will be the largest development in Centennial.

The Jones District is a 42-acre master-planned development that will become a destination community to live, work and play.

“We’re thrilled to share our plans and kick off work for the first of many projects at The Jones District,” said Peter Coakley, senior vice president and general manager, Opus Development Co. LLC.

“The Glenn is a prime example of what’s in store for this community with spectacular mountain views, upscale amenities and convenient access to public transit – it’s a terrific project to start the 1.8 million square feet of development to come,” Coakley continued.

The Glenn, west of Interstate 25, will feature retail space on the ground floor as well as high-end amenities for residents such as a fitness center, office space, outdoor pool, hot tub, fire pit and grilling areas.

The sixth floor will also feature a clubroom and outdoor deck designed to take full advantage of Front Range views.

Opus is the developer selected to transform The Jones District into mixed-use space including residential, hotel, office and retail projects.

The Glenn is truly an in-house project for Opus.

Not only is Opus Development Co. LLC the developer but also Opus Design Build LLC is the design-builder and Opus AE Group LLC will be the architect and structural engineer of record.

The building will be owned by a joint venture partnership between Opus Development Co. LLC and a Boston-based real estate adviser.

First National Bank of Omaha will provide construction financing for the project.

When completed, Greystar will lease and manage The Glenn.

In today’s market, it made sense to have an apartment community as the first development in The Jones District, Coakley said.

“I think it is responding to the continued market demand for multifamily housing, in particular at those locations that have an immediate access to transit,” Coakley said.

He said he thinks renters in today’s market, prospective renters look at a large geographic swath, before deciding where to rent.

For example, one person in his office who moved to Denver from Minneapolis looked at apartment communities from Westminster to Centennial, before deciding to rent a unit near the Denver Botanic Gardens, he said.

The Glenn is likely to draw people who work along the southeast corridor.

However, because residents can walk to a light-rail station, it opens it up to people who work in downtown and other places.

“Greystar has been tracking transit-oriented developments and they are performing very favorably relative to nonTOD projects,” Coakley said.

“And there is a very short supply of TOD projects under construction,” he said.

At The Glenn, he noted, a renter could walk to the light-rail station and be at the Denver Tech Center or in downtown Denver in a short period of time.

“And with all of the new RTD connections opening, it is easy to get to a place like Fitzsimons and DIA,” Coakley said.

For those who prefer to drive, there is easy access to I-25 from Dry Creek and County Line roads, he noted.

“Those are very good interchanges,” he said.

Opus is projecting rental rates to be just under $2 per square foot.

“That compares very favorably to competitors in the area,” Coakley said.

The average square foot of a unit will be about 900 sf.

“The majority of the units will be one bedrooms and two bedrooms, but we will have some smaller units and some three-bedroom units. We will have a good cross section of availability,” Coakley said.

He expects The Glenn to attract millennials as well as empty nesters.

Of course, everyone goes after millennials, but Coakley said empty nesters also will be a powerful rental demographic.

“Folks in my generation, for example, are transitioning out of homes and a lot of people are looking for two-bedroom units to live in, as they downsize,” Coakley said.

The apartment communities currently under construction in the area range from about 232 units to 285 units, making The Glenn the largest of the new breed of communities being built, according to Greystar’s research.

However, there have been a couple of recently built communities along the southeast corridor that are larger, with 353 to 362 units.

“We are one of the larger ones,” Coakley said.

The land is not only high profile, but on a high point.

“I was talking to Glenn Jones and he was telling me when he was looking for a site for his cable TV headquarters, he was driving up and down the Valley Highway, looking for a really high point to build it,” Coakley said.

“So people who are residents at The Glenn will have great views of the mountains, from Pike’s Peak to Long’s Peak,” Coakley said.

The land that Opus is acquiring was land that Glenn Jones acquired over years around his headquarters building.

In 1961, after graduating from the University of Colorado School of Law, Jones began his career in cable television by representing cable companies in their acquisition efforts across the country.

In 1967, Jones borrowed $400 against his Volkswagen to purchase his first cable system in Georgetown.

Three years later, he formed Jones Intercable Inc. He sold 30 percent of it in 1993 to BCI Telecom Holdings. In 1998, Comcast, with BCI, paid more than $500 million for 37 percent of the company. Comcast bought the rest of the company in 1999.

Jones wanted to see the land he had acquired be developed into a legacy, mixed-use community that would serve the area for generations to come.

“For several years, I’ve looked across this expanse of land and envisioned the potential of a business and community center that contributes to the vitality of south Denver,” Jones said in 2014, when announcing he was selling the property to Opus.

“The Jones District delivers on this vision,” Jones said.

“We are committed to delivering a quality project to ensure that The Jones District will create a destination that is defined by both economic success and community contribution,” he said.

Jones began acquiring the land, around his corporate headquarters building, about 30 years ago. He made the last purchase, the 9.8-acre Larrick ranch, in 2009. Louise Larrick lived there until she died Aug. 5, 2013.

“We were good neighbors,” Jones told DenverRealEstateWatch.com in 2013.

“I would look over the balcony (from my office) and keep an eye on things, like making sure the horses were in the corral,” Jones said.

The Glenn will be the first stick-built, wood frame apartment community by Opus in the Denver area.

It will not be its first apartment building in the metro area, however.

And around 2005, it built the Pinnacle condo towers by City Park, although they were for-sale, not rental, units.

Opus probably will not own The Glenn for the long term.

“While we have not identified our hold strategy, but typically we are not long-term holders,” Coakley said.

“We are what is known as a merchant builder, so we usually exit a development, where either the partner stays in and buys us out, or we sell it to someone else together,” he explained.

“It’s too early to say what our exit strategy will be for The Glenn, but that is our standard business model.”

In addition to The Glenn at The Jones District, Opus Design Build LLC currently is working on a six-story, 886-stall parking garage in Westminster.

The structure is slated for completion in 2017 and is part of the Westminster Retail Center Redevelopment project.