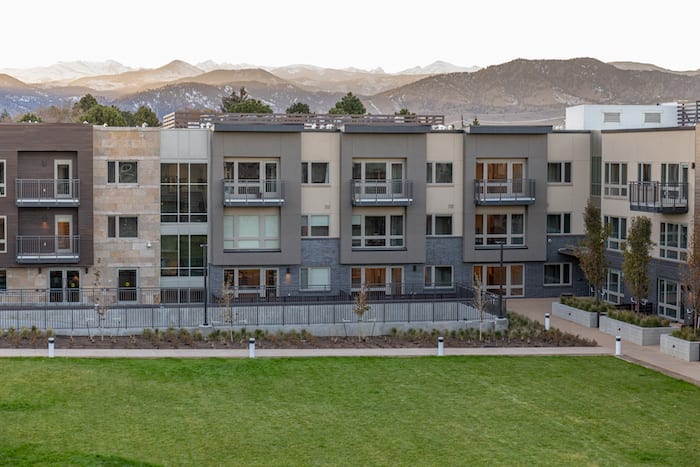 “Recognizing the need is the primary condition for design.” – Charles Eames

“You have to forgive me,” he says as he pulls out his phone and begins to take pics. “This is the first I’ve seen this room come to life. I’ve been staring at a rendering for four years, so I’m kind of nerding out a bit on you. This column work …” His voice trails off as he takes it all in. He studies the towering cedar truss, looks over at the grand fireplace, then back to the pool that stretches toward mountains to the west. His phone drops to his side and he lets out a sigh. Is it relief? Is it pride? Safe to say it’s a yes to both.

A collaboration between Tryba Architects, Milender White and Aimco, when completed next month Parc Mosaic will feature 226 units – studio to three-bedroom – in four buildings spread across a parklike patchwork of gardens and green spaces. Monthly rent will run $1,600-$6,000, more for below-grade parking, bike storage and ski lockers. 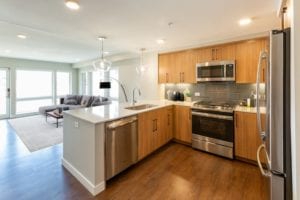 While walking the project with Leonhardt and his team, it’s clear that Boulder has never seen this mix of luxury, landscape, comfort and amenities in apartment living. Aimco listened to the city, its neighbors and potential tenants with the result being an absolute mic drop to future Boulder multifamily developers.

But, let’s start at the beginning. In 1971, Eastpointe Apartments were built here on the south side of Arapahoe Avenue, just west of 55th. Cutting edge for the time, the complex consisted of a cluster of two-story walk-ups surrounded by a moat of parking.

The property went on the market in 2014 and Aimco, which operates two other Boulder properties, looked beyond the crumbling Brady Bunch-era Eastpointe and saw great potential.

“There were a lot of factors that caught our eye about the property,” says Leonhardt. “We really like this east Boulder corridor that has nice conductivity to downtown by bike, bus or car. There were also economic drivers around it that were very strong.”

Leonhardt pointed to Ball Aerospace across the street and the property’s proximity to the hospital, coffee shop, restaurants and a craft brewer right next door.

With the property purchased in 2014, there was a year of planning and underwriting followed by two years of working with the city of Boulder to navigate permits and entitlements, a process led by Tryba. Ground finally was broken in March 2018.

While the city of Boulder can be notoriously challenging to work with, according to Leonhardt and Adam Mack, executive vice president and district manager for Milender White, the city was a helpful partner on the project.

Tryba’s Jeff Smith, principal, led the entitlements process and had no issues working with the city. “The key to working through the Boulder process is to be responsive, diligent and patient,” says Smith. “Planning staff was quite flexible and guided us to a successful outcome with both the Planning Board and City Council.

According to Leonhardt, the genesis of the design for Parc Mosaic was to reverse what had existed there before.

“Eastpointe was a village inside of a parking lot. And we wanted to flip that inside out and create a community that was within a garden,” says Leonhardt. “We played on that idea and we immediately knew we were going to have to put the parking underground.”

As the team worked through just how this project would exist over a 4-acre subterranean level, Aimco also did extensive community outreach to gauge the feelings of neighbors and potential residents.

“Aimco takes a very resident focused approach,” says Jamie Alvarez, Aimco’s corporate communications manager. “Any vision about any of our communities is really built around the residents where the community is, so building something that makes sense for the fabric of that community. It’s really about what makes the location unique, how it serves the community and the Boulder resident.”

“So, it was really through public forums that we were able to ask the end user what they would do,” says Leonhardt. “And we took that information, layered it into what the city wanted and adjusted the project as we went along. We really wanted to be flexible and open-minded to the Boulder lifestyle.”

According to Mack, Milender White and Aimco have a very regimented process of preconstruction that sees him involved very early on in the process.

“It’s growing more and more normal in the marketplace as sophisticated owners realize that they’re better off to have a general contractor as a partner throughout the process,” says Mack. “It helps to monitor the budgets and the effects of changing conditions as they go through entitlements.”

To that end, Mack utilizes trend logs that are pored over at weekly meetings with Aimco, Milender White and Tryba so that everyone knows exactly where the budget is headed, keep costs contained, stay on schedule and plan ahead for any issues that may arise. Like groundwater where you want to dig a below-grade parking garage.

“We knew water existed 6 feet down well before we began construction,” says Smith. “So, the basement garage was designed to account for groundwater.”

Mack explained they had run into something similar while previously working on two hotel projects in downtown Boulder and they knew exactly what to do.

“We had experience in building a ceramic microfiltration sled, a skid-mounted water treatment plant,” says Mack. “So, we were able to design one for this project.”

“Our groundwater system was designed and budgeted for all along,” says Smith. “We’ve had very few surprises in construction. This is a benefit of a long entitlements process with Boulder.”

Back on the site tour with Leonhardt, Alvarez and Mike Englhard, Aimco’s senior vice president of construction, the team enthusiastically sell the features of Parc Mosaic. But, in all honesty, there’s not much selling needed because this property plays more like a resort than an apartment complex. 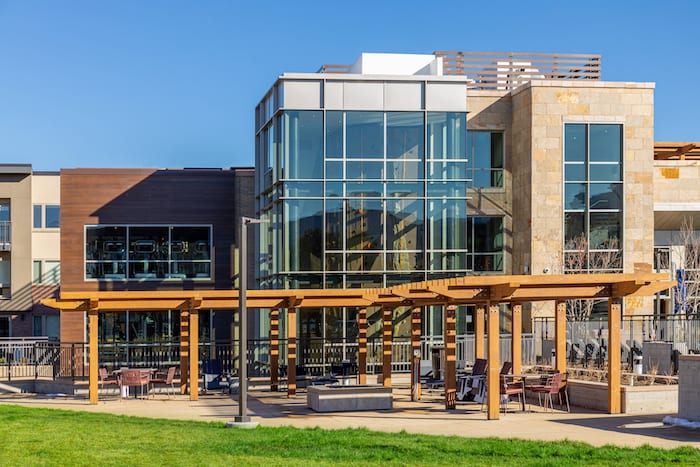 Outdoor seating is just one of Parc Mosaic’s many amenities.

Within the property are a series of green spaces – especially a large lawn that Leonhardt said he fought to keep free of programming. There are outdoor seating areas, a Zen garden – because, well, Boulder – a play area for kids and in the exact center of the property stands a contemporary wooden sculpture by Boulder artist Richard Saxton.

Just east of Saxton’s sculpture stands the three-story Amenities Center and four L-shaped tenant buildings frame the property at each corner. Each tenant building is named for a different rock formation within the Flatirons, those famously slanted, reddish-brown sandstone formations that make up a portion of Boulder’s foothills to the west. Benton, Pierre, Archean and Lykins together will contain 226 luxury units loaded with features that promote livability and convenience. And, according to Englhard, quiet, if that’s your thing.

“Every demising wall is a double stud and the studs are offset,” says Englhard. “So you don’t have a continuity where sound can transfer from one (wall) to the other. So there’s not one material on this side that’s touches a piece of material that’s connected to the other wall.”

Englhard also explains how they saved a lot of noise for the neighbors in the construction phase.

“The whole project’s framing was constructed off site. For quality, speed and neighbor-friendliness, all of the panels were fabricated in a warehouse. We did the analysis and by having them fabricated off site we saved a million nail shots with a nail gun. It’s faster, quality control is better and from a risk standpoint, it’s safer.”

The exterior cladding on each building varies slightly but is a mix of brick or buff sandstone, stucco and a rice-based, wood-look siding. The scale of each structure is broken down nicely and each has its own activated rooftop terrace with outdoor fireplaces, grills and Instagram-worthy views of the foothills to the west.

Walking inside the buildings, curated art from artists with Boulder ties line the hallways and as I tour the units, I find them to be open, airy and sun-filled – thanks to oversized windows – and loaded every possible high-end feature. To ensure safety and convenience, each apartment features Smart Rent locks, which allows control of locks, lights and thermostat from an app on a phone. The only key required? To the mailbox and, according to Englhard, “We’re working on that, too.” Access to all amenity spaces and rooftop terraces are controlled with biometric readers, so little chance of nonresidents crashing sunset wine session.

The lineup of amenities is decidedly Boulder-centric with a four-story climbing wall, cardio gym, weight room, Peloton studio, ski lockers, bike lockers, bike racks, bike workshop and a massive mural of Boulder’s network of bike paths/trails created by the artist who draws the Boulder bike maps available at the local bike shop. As the tour of the property ends, it’s clear this project is a huge source of pride for everyone involved. They listened to the community, they worked with the city and they worked with together to create a truly unique Boulder property.

“We’re very proud to have worked with Aimco on this truly unique approach to redevelopment,” says Smith. “The end product is exactly as planned and focuses the attention to the spaces between the buildings – spaces where people relax, exercise, commune and interact with the incredible natural environment in Boulder.”

“I think Parc Mosaic is really a testament to the Boulder community,” says Alvarez. “I love that. It’s such a unique property and I think the whole team is proud of the extra steps that were taken to make sure that it’s an integrated part of the Boulder community and that lifestyle.”