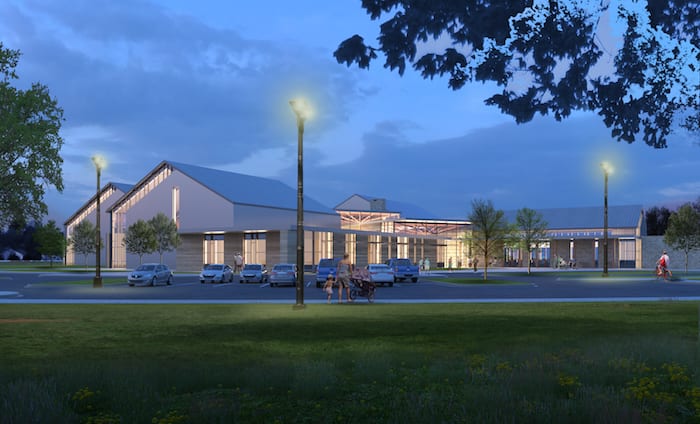 Commerce City – with Pinkard Construction and Perkins + Will – recently celebrated the grand opening of the new Bison Ridge Recreation Center.

“Residents told us what they wanted in the new recreation center and today that vision is a reality,” said Mayor Sean Ford. “With residents’ vision and support, Commerce City is now home to a state-of-the-art recreation facility that will serve our growing community for many years to come.”

“Commerce City is a growing community with a contrasting character in both industrial and farming heritage,” said Chris Kastelic, AIA, LEED AP, Perkins + Will principal. “With one foot rooted in the past and an eye toward the future, the building envisioned by City Council and the citizens they represent was one of timeless tradition in modern clothes.”

The building is part of the northern edge of town that bridges the agrarian communities of Northern Colorado to the metropolitan center of Denver, in what is often described as the “Prairie Gateway.”

“The organization of the building, from the earliest sketches, was a careful composition of gabled forms intended to recall a cluster of agrarian buildings – the homestead,” Kastelic said. “As a way of overcoming one of the biggest challenges, breaking down the scale of this large structure into more intimate spaces and a more personal scale, the rotated barn forms appear to shift and as visitors arrive at the site, creating a more interesting composition.”

Materials were selected to balance an industrial character with the traditional typology, cladding the larger forms in deep patina metal cladding and rustic lap-board siding, rugged Colorado buff sandstone and ample glass to highlight its function as a vital center of community activity, according to Kastelic.

Inside the building, the same character of materials leads patrons through the public spaces with clear views into activity areas.

“Again, the cluster of barns forms is expressed in the lobby and gathering areas, creating interesting found spaces in the voids between, and framing views across the pastoral site,” Kastelic said. “The community’s motto is a ‘Quality Community for a Lifetime,’ which set the tone for the for this landmark project and a special place to be enjoyed by generations of Commerce City residents.”

While the recreation center’s original scope and budget grew by nearly 40 percent, the targeted spring opening date did not change. Pinkard Construction worked in a strong teaming relationship with the owner/architect team to find creative ways to fit the growing scope into an unbending schedule. This collaboration allowed for a timely start and an efficient construction phase, culminating with the on-time grand opening.

Published in the July 2018 Development, Construction & Design section of CREJ.