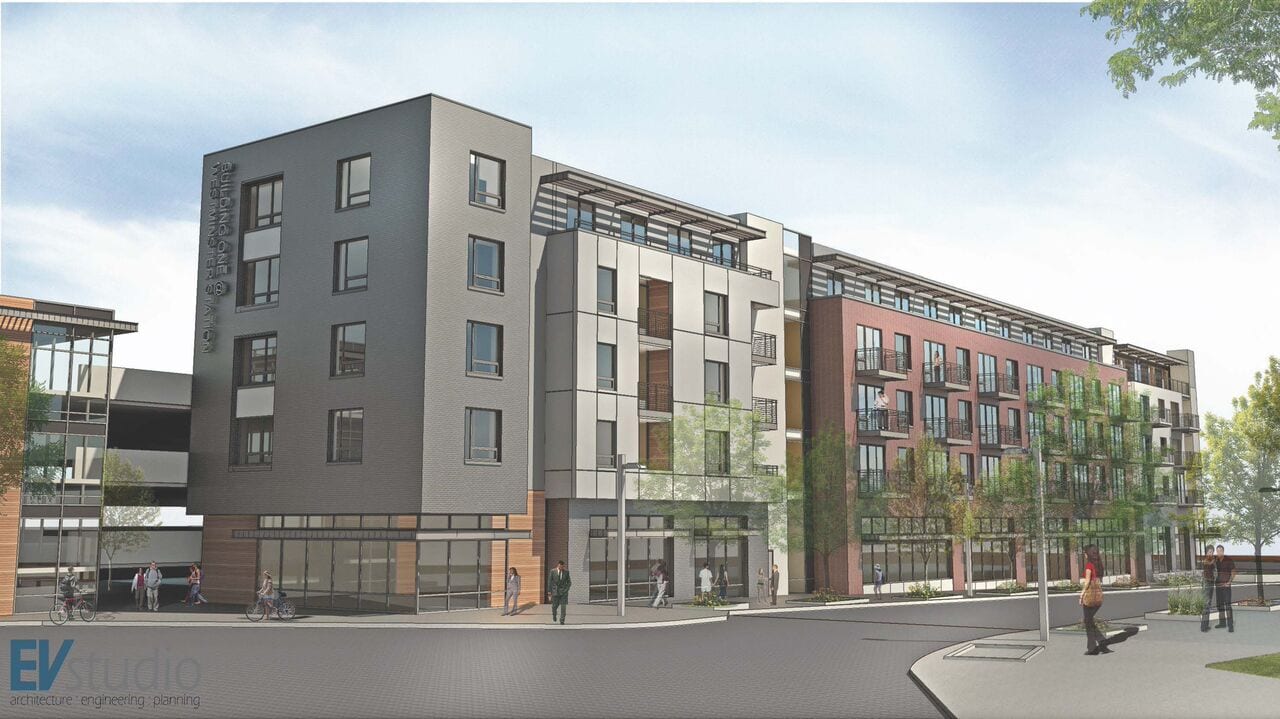 The city of Westminster and REgeneration Development have executed a letter of intent to partner on the development of the first market-rate, transit-oriented, mixed-use project at Westminster Station.

A pioneering project is brewing in Westminster.

The city of Westminster and REgeneration Development have executed a letter of intent to partner on the development of the first market-rate, transit-oriented, mixed-use project at Westminster Station.

The project, currently proposed as a phased two-building project with ground-floor commercial space and four stories of residential above, will wrap the south and west sides of the new 600-space Westminster Station parking garage at the intersection of Irving Street and Westminster Station Drive along RTD’s B-Line.

The first building is planned to include 51 units above approximately 12,000 square feet of retail space while the second phase of development will include around 72 units above 14,000 sf of commercial space. Both buildings are planned to have four stories of wood-framed residential units over a concrete podium first-floor commercial retail/restaurant space.

“As a Westminster resident, I wanted Gemini’s first physical taproom to be in the same community where my family and I live,” said Chris Dutton, owner of Westminster-based Gemini Beer Co., who has operated other brewpubs in the Denver region. “Over the past few years I’ve seen all the investments the city and RTD have been making at Westminster Station, and I fully support the city’s vision for future mixed-use redevelopment around this new transit hub. So when the opportunity arose to be the anchor tenant of REgeneration’s first transit-oriented building here, I jumped at the chance.”

The 3,000-sf taproom and restaurant will feature Gemini Beer’s current selection of brews as well as one-off beers for special occasions that are only available at Gemini’s Westminster Station taproom.

“Our goal with this taproom is to create an environment that builds community and connections, allowing people from different walks of life to interact one-on-one over great beer and food offerings, or to host larger gatherings with colleagues, friends or family. Our desired location in REgeneration’s first building will be visible from all access points into Westminster Station, so we hope to become a true community crossroads,” added Dutton.

“We think that Gemini will be a perfect fit for our mixed-use apartment buildings in this up-and-coming area. Our hope is that their taproom will not only become a gathering spot for the neighborhood but also the ‘public living room’ for our other buildings, where our residents can connect with one another. To that end, we’ll be offering every resident of our Westminster Station buildings a discount at the Gemini taproom. So you can add that to the growing list of amenities at Westminster Station, along with the affordable rents, the 11-minute train ride to downtown Denver, the massive park with regional trail connections and the growing arts and entertainment options,” said Jeremy Nelson, managing partner with Westminster Station REgeneration LLC.

“REgeneration and Gemini have both demonstrated their commitment to the city’s broader goals of supporting transit-oriented development and community investment in Westminster Station,” added Jenni Grafton, economic development coordinator for Westminster. “This LOI between REgeneration and Gemini provides more evidence of the reinvestment that’s happening in Westminster Station right now, and which is providing momentum toward the city’s future vision for this area.”

“EVstudio has a great deal of experience in multifamily projects and a specific interest in TOD. When this opportunity came to us through a common friend in the professional community, we jumped at the chance to provide the A/E services for its design. In fact, we have so much confidence in the Westminster Station area plan and all of the great things that will come as a result, we decided to partner with our client on this project with a minor equity position,” said Dalvit, AIA, PE, principal of EVstudio.

The design of Westminster Station will be “modern in aesthetic” but with influences of historic industrial appeal to give a nod to the transportation-oriented nature of the site, noted Dalvit.

“Expanding on the massing and materials, a mix of brick, steel and glass with protruding balconies will afford the buildings an urban context feel that the Westminster Station plan is seeking to achieve. Additional accent materials will add interest and we are planning on a first-of-its-kind transit oriented art installation throughout the project that will be a visual cue to people when the train is coming and going,” he added.

Work on the first phase at Westminster Station will start this fall. Units are slated for delivery Jan. 1, 2019.

Other tenants eyed for the project include local and regional businesses, such as a fitness facility, restaurant and café.

The city and the Regional Transportation District have invested $76 million in infrastructure improvements in Westminster Station, including the new rail and bus service, parking garage, an amphitheater for outdoor performances and a 37-acre park with trail connections. In addition, the city is putting in place new development regulations in the soon-to-be-adopted Westminster Station Area Plan with that promote mixed uses, increased density, good urban design and walkable streets.

“The entire Westminster Station area plan is a bold vision for the future of what this area can be,” added Dalvit.