The Quincy, developed by Shea Properties, was built by GE Johnson and designed by Davis Partnership.

“We shape our buildings; thereafter they shape us.” – Winston Churchill

Affable and understated, Peter Culshaw is a hands-on leader who understands why there is no “I” in team. As executive vice president of Shea Properties, he oversees more than 2 million square feet of commercial space along with roughly 2,000 apartment homes in Colorado. While well-known sustained successes like the Denver Technological Center, Meridian Business Park and Village Center already have cemented his status among the best to ever do it in Denver development lore, for Culshaw the horizon itself remains the thrill. 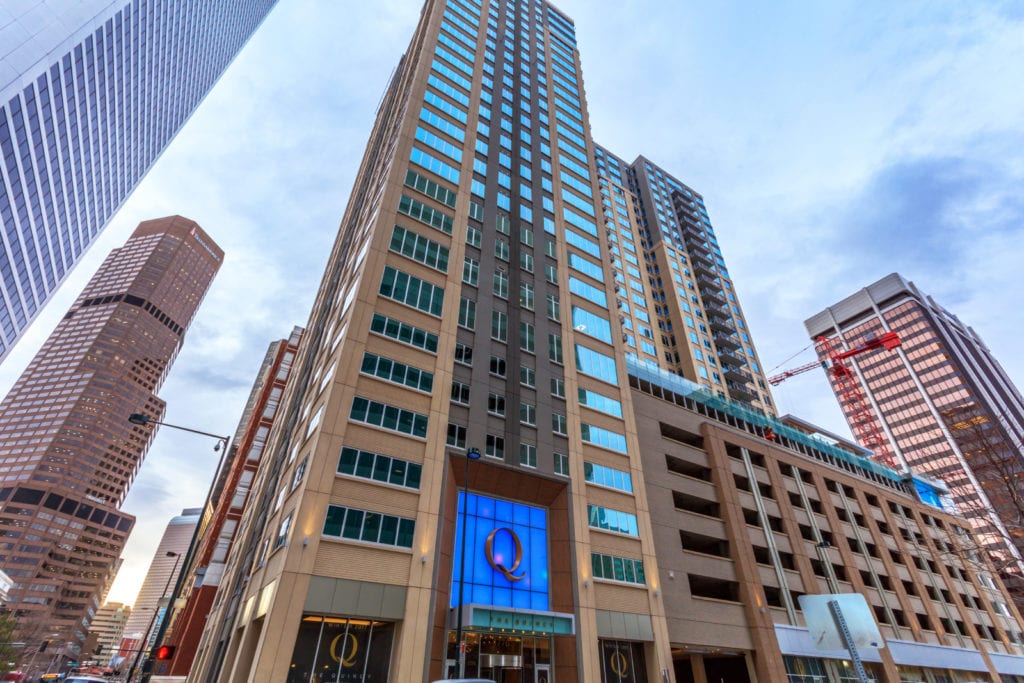 The Quincy is a 28-story residential tower offering best-in-class amenities delivered in the premium quality of a build-and-hold legacy asset.

Shea Properties’ latest reveal, The Quincy, located at 1776 Curtis St., is a 28-story residential tower offering the best-in-class amenities expected of high-end, downtown living delivered in the premium quality of a build-and-hold, legacy asset. Some 359 luxury homes composed of studio, one- and two-bedroom units are expected to stand out for their generous proportions, extensive glazing, and the amenity plaza on Level 8. A large community room, cyber café and game room are joined by fitness facilities and an exposed rooftop lounge featuring multiple hot tubs, grilling areas and fire pits. The property’s signature element will clearly be the pool, featuring a fully transparent exterior wall visibly perching swimmers eight stories above Denver’s central business district along Curtis Street. 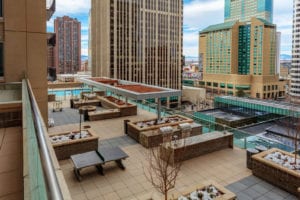 The amenity plaza on Level 8 includes an exposed rooftop lounge.

The amenity deck sits atop eight levels of parking, totaling 550 spaces, which is joined by ground floor retail to round out the mix of components. The Quincy represents Phase I of a two-phase site build-out. To complete the block, Phase II (now underway) will deliver The Prism, an office cube in glass boasting a unique sculpturally cleaved prismatic exterior along 17th Street. Combined, the two properties will offer a live, work, play lifestyle while also brilliantly illuminating Culshaw’s absolute conviction that conscientious people applying proven processes is ultimately what makes projects successful.

“The secret sauce is in getting it right,” says Culshaw when asked to consider how he measures success on The Quincy or any other development. Multifamily and office projects tend to be build-and-hold assets for Shea Properties, so building with high-quality materials and minimizing long-term operational costs are the basis for decision-making rather than economizing development. “This opportunity is a ground-up high-rise, on a tight site in sensitive surroundings,” continues Culshaw thoughtfully. “Success in development is a team effort. We rely on in-house professionals, financial partners, and, of course, creative architects, smart contractors, and an awful lot of skilled craftsmen on the site to make it happen.”

While on-time, on-budget is a universal expectation among clients, few design and construction teams are ever tasked with delivering a single building over more than a decade from first draft pricing to ribbon cutting. Led by architects Davis Partnership and construction manager GE Johnson Construction, the team working on The Quincy and The Prism has been engaged continually since 2007. The site master plan, initial designs, and estimates were presented just before the 2008 recession compelled Shea to put the project on the shelf. Scott Miller, the construction manager at GE Johnson, reflects on what a long strange trip the project has been. 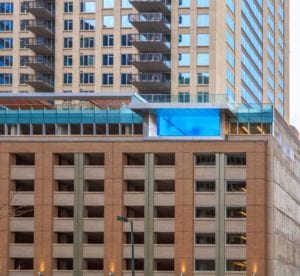 The amenity deck sits atop eight levels of parking, totaling 550 spaces, which is joined by ground-floor retail to round out the mix of components, including the pool, as seen from the street below.

“We started the project in late 2007 during an economic peak, which shapes pricing. Then we entered big recession and market uncertainty,” says Miller. “Denver comes out of the downturn relatively quickly and enters a booming building market and suddenly there is a significant subcontractor and skilled labor shortage. Fortunately, our relationship and genuine friendship with Davis Partners is very strong. The collaboration between our firms allowed us to work through the details and manage challenges rather than problems.”

Miller notes that GE Johnson’s acutely detailed estimates accounted for as many exact quantities as possible, which increased Davis’ ability to keep the design on track. Managing many very small detailed changes rather than a few big ones were the focus of design-to-budget and market alignment when it was clear the project would finally break ground in 2015. To make the best use of a very limited site and maximize construction cost efficiencies, GE Johnson engaged a number of Lean construction strategies including pull planning and prefabrication.

“We’ve got a cast-in-place structure supporting a precast exterior skin,” says Miller. The combination allows a lot of design flexibility for varying floor heights and minimizing column locations to create large internal spans and open units while also contributing to a cost-effective, buildable solution. Since GE Johnson self-performed the cast-in-place concrete, it was able to control the critical path through the project using its own labor force and equipment, reducing the impact of subcontractor shortages on cost, schedule and quality. For the precast components, GE Johnson and Davis readily engaged key subcontractors in a design-assist capacity to ensure on-site efficiency in limited operational space.

“We worked with the precast and glazing contractors to figure out ways to preassemble complete exterior wall panels on the ground before hoisting them up as ready-to-install sections. This saved time, money and space to everyone’s benefit.” 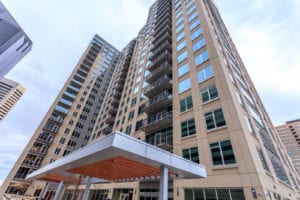 At 28 stories, The Quincy will be the tallest building completed in GE Johnson’s 51-year history.

Miller reports with pride that at 28 stories, The Quincy will be the tallest building completed in GE Johnson’s 51-year history. With the limited footprint and tightly controlled regulations related to vertical and overhead movements, early construction logistics centered on tower crane placement. The crane had to be able to pick materials up from two different ground locations and lift and swing them across the top of the site to the rising structure. Public safety and efficient egress for large truck access including setting up a site-internal throughway down 18th Street were closely coordinated with the city of Denver. 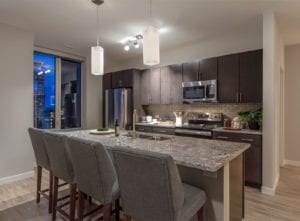 Some 359 luxury homes, including studio, one- and two-bedroom units, incorporate high-end finishes in the kitchen and throughout.

“My job is to manage the healthy, necessary tension between the designer and the builder,” says Culshaw thoughtfully while acknowledging that despite the long road to fruition, The Quincy was relatively complication-free in actualization. Shea Property’s original pro forma was adjusted up to account for current market conditions when the project was ready to resume, but Davis’ design and GE Johnson’s estimates essentially moved in tandem with the recalculated budget. The Quincy adds a thoughtful, destination living environment for Denver’s downtown renter. When The Prism is complete in the fourth quarter, the completed vision will finally take its place in the Shea Property portfolio.

“Getting it right means conceiving a high-quality, market-appropriate asset, delivering it on-time and on budget, and then stabilizing and refinancing it for the long-term,” finishes Culshaw. “However, it also means repositioning surface lot parking as a vibrant, new mixed-use microcosm of what makes Denver great. The credit here goes to a team of true professionals who stuck to it and made good on their commitments. That’s what success in development is always about.”

Published in the March 2018 issue of Building Dialogue.