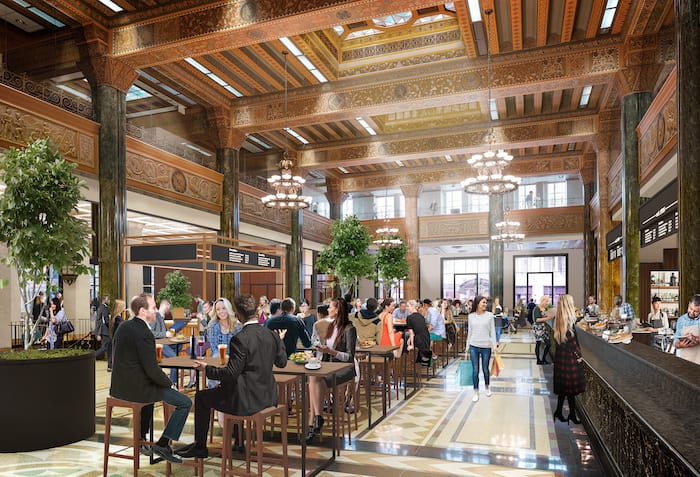 In 2018, Denver reached a record $9.4 billion in new construction. That same year, the first new high-rise in more than 30 years was constructed at 1144 15th St. While construction volume reduced slightly in 2019, several additional tall buildings are under construction or in the city’s current planning pipeline. 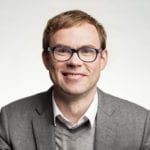 Construction on this scale is a strong sign of economic growth, a vital pathway to the density necessary to house our increasingly urbanized population, and an opportunity to explore more sustainable and resilient building technologies. As new construction rapidly reshapes our city and public realm, it also becomes more critical to re-examine the condition of our existing buildings to ensure their relevance for the future, and to recognize the inherent social, economic and environmental benefits of adaptive re-use and repositioning.

The Brookings Institute forecasts that 82 billion square feet of existing space in the United States will be demolished and replaced between 2005 and 2030 – roughly one-quarter of today’s existing building stock. Further, as noted by the American Institute of Architects in its recent statement on climate action, in the U.S. alone nearly 40% of greenhouse gas emissions can be attributed to carbon produced by buildings during construction and everyday operations. Embodied carbon from construction represents around 30% of this impact.

The practice of adaptive reuse can prevent some of this demolition, extending a building’s useful lifespan, allowing it to become a critical component of urban regeneration and providing continuity for the cultural memory of the city. In many cases, reusing existing buildings can help avoid additional carbon production, thereby reducing greenhouse gases contributing to climate change and offering an important means for cities to achieve their immediate carbon reduction goals.

By redeveloping existing building stock of all ages and types, vital elements of history and culture can be preserved while repositioning the properties for a new generation of uses. Several recent projects in Denver and beyond offer examples of the role of adaptive reuse in the revitalization of cities, maintaining the relevance of existing buildings, activating urban fabric and providing continuity between the past and present.

Connecting to a Celebrated Story of Craft and Integrated Art

The Ideal Building, a nine-story, 115,000-sf building at 821 17th St. in Denver’s financial district was completed in 1907 as the headquarters of the Ideal Cement Co. and was the first multistory office building west of the Mississippi River to be built of reinforced concrete. The building was remodeled in 1927 and restored again in 2001. In 2017, the building, now renamed “The Vault,” was purchased by Harbor Associates and underwent a significant renovation with the goal of retaining the building’s sense of history while adding the amenities and improvements required by tenants who desire a balance of authentic character and performance.

The restoration of one of Denver’s most architecturally significant buildings involved refreshing the historic lobby, opening up and refurbishing the upper floors, remodeling the ground floor and basement, adding bike storage, locker rooms and showers, re-imagining the ground floor for retail amenities and restoring and upgrading the exterior façade with new contextual features. The design responds to the historic art and decorative motifs of the existing building and reveals and reframes historic aspects that create a strong sense of place, including the old bank hall and vaults, and historic brass doors. The repositioning will be completed in early 2021.

Creating Connections to Nature & the Outdoors

Our practice has a significant focus on the repositioning of newer office buildings to ensure their continued relevance in the current office market. This work often involves connecting inwardly focused and sealed environments to nature and the outdoors. 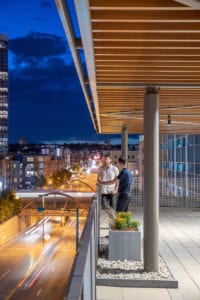 1551 Wewatta: Tenants take advantage of the city view from the new terrace.

The 10-story building at 1551 Wewatta was completed in 2002 as the headquarters of Gates Corp. Owner Bentall Kennedy engaged Tryba Architects to add new amenities to the existing property in order to appeal to a new generation of tenants. The design team expanded the lobby, adding greater vertical height and a new all-glass façade that follows the s-curve of the existing building. The glazing is framed to reflect the language of the building, but with a new level of transparency that animates the street and better connects with the surrounding urban context.

The team also added a large new amenity terrace on what was the fourth-floor roof. A new stair has been carved through the building to allow for terrace egress. Further strengthening the connection to nature, the design includes an intensive green roof with substantial trees, shade structures, a turfed activity area and a series of well-defined outdoor rooms for tenants, providing space for outdoor meetings, work and relaxation. Finally, the design allows for new assembly space on the lower four floors of the building and enhanced entrances to street edge retail.

The new lobby and elevated garden terrace distinguished the well-located building in a competitive Lower Downtown leasing environment. In 2018, VF Corp. – the parent company of North Face and Smartwool – signed a 12-year lease for the entire 285,000-sf building.

The Glass Lab is a 46,000-sf former glass factory in the Portland Innovation Quadrant. Owner ScanlanKemperBard recognized the history and opportunity in the property and engaged Tryba to transform the vintage industrial building into a community-oriented creative hub for the next generation of makers and innovators. A strong sense of connection between the building’s industrious past and the creators of the future was created through a principled approach that balanced respect for the building’s 1950s warehouse-style architecture with the area’s forward-thinking ethos.

Original building elements, including two overhead cranes and several intricate etched glass features, serve as a reminder of Portland, Oregon’s, historic culture of innovation and pay homage to the original Morehouse Glass Co., which operated on the site for 46 years. The combination of exposed concrete, old-growth timber beams and tongue-and-groove wood floors further help maintain a raw, authentic feel throughout the building while high ceilings and large skylights keep the space naturally bright.

The Value of Taking a Closer Look

From historic landmarks to midcentury warehouses, there is great potential to create places of lasting value in the existing built environment. While demands for new buildings will always exist, adaptive reuse is a critical component of a sustainable approach to architecture, urban design and placemaking. The reinvention of existing buildings offers a sense of connection to history and place, minimizes the carbon production associated with new construction and ensures the continued relevance of the existing urban fabric of our cities for generations to come.

Published in the March 2020 issue of Building Dialouge.