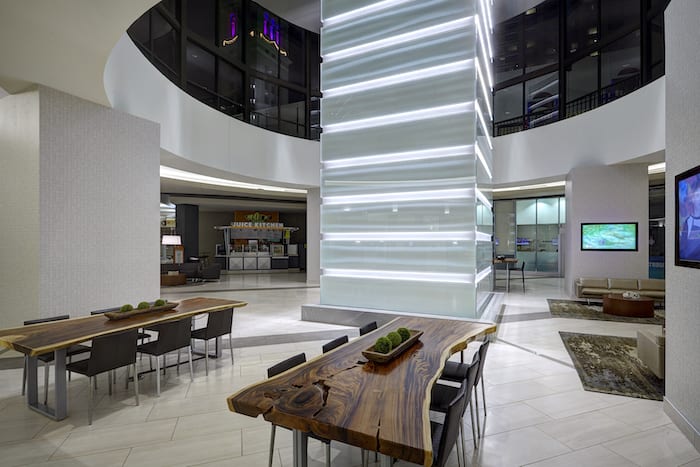 A Wall Street Journal real estate column late last year declared that office building lobbies for the last century “served as little more than sterile passageways between the sidewalk and the desks above …” A small dose of urban hyperbole, to say the least, but there is truth in the sentiment. 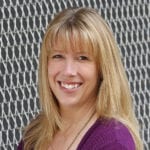 Aging Class A office buildings in metro Denver and every other major American market are struggling to keep pace with similar renovated properties and, certainly, with new product. Lobby spaces for years have been tagged for redevelopment largely because no other options exist to introduce or improve amenities within those existing buildings. Improvements might include upgraded collaboration spaces, coffee shops, cafes, conference rooms, fitness rooms and a wide range of other modifications designed to offer tenants more options without having to leave the building.

Downtown Denver’s Independence Plaza is one of those properties.

Completed in 1972, Independence Plaza’s 567,287 square feet span 25 floors at 1050 17th St. The Class A property is LEED Gold certified, and the scrupulous attention paid to its upkeep and improvement have made it one of the finest addresses in Denver’s central business district.

But the lobby needed a refresh, a “modernization and vitalization” said Cathy Harris, vice president and project manager with Denver’s JLL, which also does the leasing for the property. Harris noted that despite the building’s overall excellent condition, the lobby’s design needed a push to compete with newer properties downtown. “The final project matched the design vision of the asset manager exactly. The renderings clearly communicated the vision and the project was executed and delivered with no surprises.”

The lobby’s main entrance off 17th Street opens into an elevator bank adjacent to the building’s security/concierge desk. The desk and wall panels are clad in dark walnut anchored by quartz slabs in taupe for both the countertop and transaction space. Decorative pendant lighting hangs atop the length of the desk while backlit identification signage completes the neutral space. 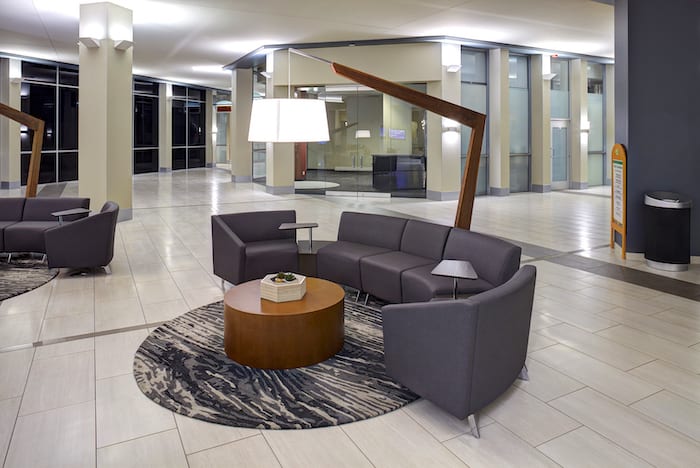 A right turn past the security/concierge desk opens into the main lobby. The area is large, open and expansive, with a dramatic circular soffit dominating the whole of the space. Cove lighting in the soffit along with a combination of indirect up-lights and decorative downlights keep the space cool and subdued. A second-floor outdoor atrium with floor-to-top windows spill abundant natural light into the lobby space below.

The entire lobby covers some 8,700 sf minus the fixed tenant spaces fanned out around the circular perimeter. Tenants range from retail and restaurant to corporate brand names and professional services. This fixed set of assets has long been attractive not only to the building’s tenants and guests, but also to neighbors who value the quality of the shops and restaurants, and the convenience of getting into and out of the space quickly and easily.

At the center of the circular soffit – sometimes referred to as “the mothership” by management – is the new elevator feature, the construction of which posed a number of challenges to both the design and construction.

The previous elevator base had been wrapped in dark gray granite with a water feature draining into a floor reservoir. Vertex, the general contractor, had to demolish and rebuild the entire structure while keeping the elevator operational during the remodel period. Additionally, temporary walls with graphic signage had to be erected around the work area to keep out noise and dust without compromising the flow of daylight into the space.

“Even though the building has really good bones, it’s impossible to account for everything that might be below the floor,” explained Ben Fay, senior project manager with Vertex. “We knew that the water feature was leaking, so there was an immediate sense of urgency.” In addition to the elevator issues and temporary walls, the Vertex crew had to build an OSHA-standard covered walkway to the elevator doors before any remodeling could begin. 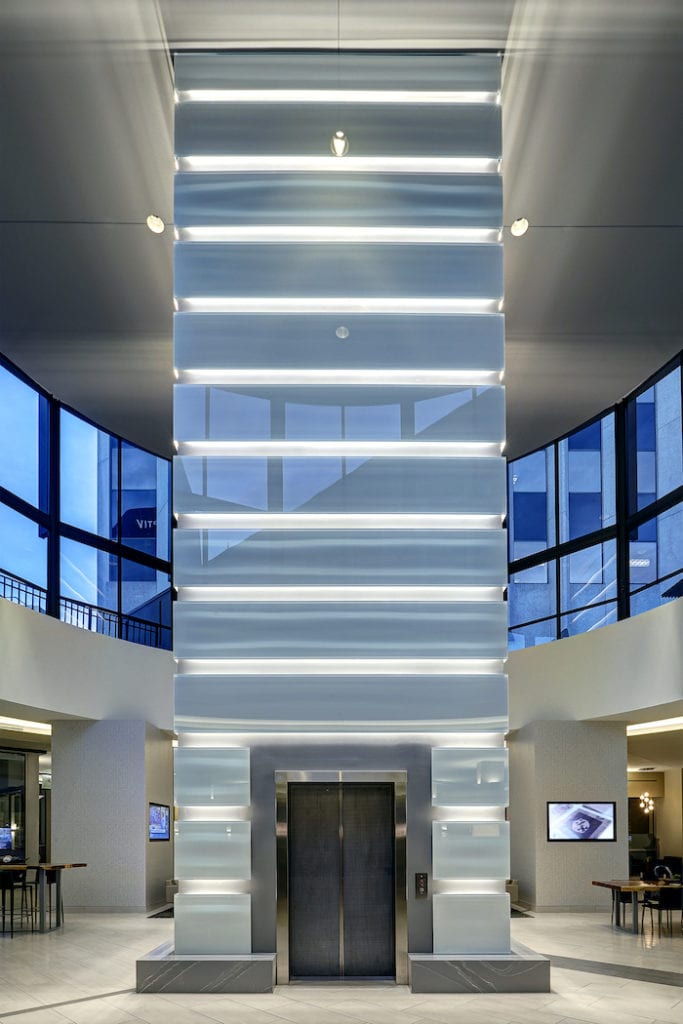 At 34 feet tall, the elevator tower is the focal point of the lobby’s remodel. Courtesy David Budd Photography

The elevator clearly is at the core of the remodel. Wrapped in back-painted glass panels, the structure measures 11 feet on each side and 34 feet high. LED strip lighting behind the panels lends an ethereal glow, especially as the sun sets in the space. The symmetry of the elevator and its location within the circular soffit are an immediate draw to the eye. Visitors and tenants naturally move to the elevator’s location near the back of the lobby where a variety of seating choices are available for both work and leisure.

To add more function to the aesthetic, a number of furniture and lighting combinations were tucked into and just outside of the space’s four main columns. A pair of “conversation” spaces with modular soft seating and cantilevered floor lamps sit atop custom rugs just outside the ring. Live-edge natural wood tables with integral power lie between the front facing columns while the same style of table with bar-height seating adds another collaboration area between the back two columns.

An additional two furniture clusters with lounge-style club chairs and cocktail tables rest on the perimeter, just opposite the conversation spaces. New flat-screen televisions on each column round out the space.

“The lobby is energized,” added Harris. “This building is a Denver icon. The courage to make change adds to the vitality and relevancy of the property. The vision was to improve the experience while respecting the history. The team we put into place matched and exceeded that vision.”